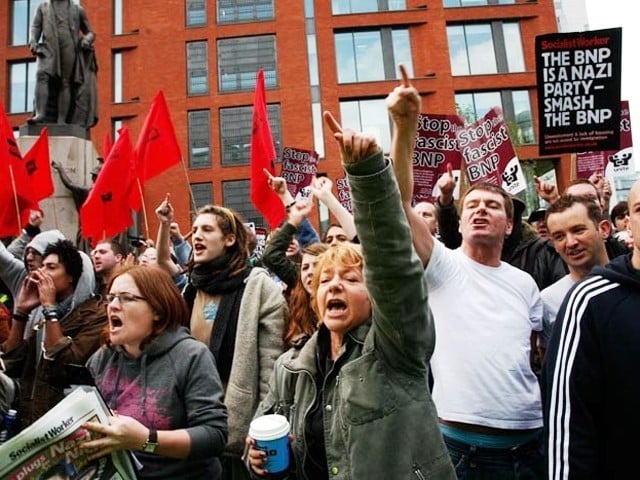 Activists in Manchester hold protest against the EDL.

Over a year ago, I was part of one the most exhilarating experiences ever – one of those transformational experiences that you keep learning from and growing through, well after they are over.

If any of you have visited England recently you must be familiar with the rising surge of the anti-Muslim sentiment and the popularity of right wing parties there. Though the swing to the right is a global phenomenon, the resurgence of blatantly racist parties like the British National Party (BNP) in a country like Britain, with a heavy immigrant population, is particularly disturbing.

In the current climate of Islamophobia, coupled with the anti-immigrant policies-induced xenophobia of the native British public, a far right political group called the English Defence League (EDL) emerged in 2009. A cursory look at their website will remind you of extremist right wing parties in Pakistan. The same religious bigotry and racial profiling, the same stoking of the religious sentiment and the same call for unity in face of the imminent threat by a foreign religion – in EDL’s case the threat being projected by Muslims who have corrupted the pure, white British population with their grotesque culture and extremist mindset.

Within a few months of its emergence, EDL was holding demonstrations in all of the major cities in Britain. With members primarily constituting white men, resembling football hooligans flashing ‘Hail Hitler’ gestures, they made quite an intimidating group. What was more disturbing though was how the British authorities allowed such an extremist group to openly demonstrate and chant hatred-inducing bigoted slogans against a religious minority.

Still, EDL had its work cut out for itself and in every city they went, they faced fierce opposition, with leftist, trade union and student union activists launching counter protests. During this time, I was based in Manchester and when EDL declared that its next great demonstration would be held there, I knew this was one day I was definitely calling in sick from work.

Weeks before the demonstration there was a campaigning hype – lectures at the Union, gatherings amongst activists of all stripes, meetings to discuss tactics and public debates on EDL’s hatred-inducing politics. On D-day, when I reached Piccadilly Gardens where the whole drama was to unfold, I was overwhelmed by the sheer numbers and unity among people from every faith, political affiliation, ethnicity, sexual orientation and age – all banding together to declare what they considered their common interest: Manchester had no place for EDL fascism. They held placards and shouted slogans, denouncing EDL’s Nazi style politics of hatred, and celebrating the culture of diversity and coexistence in Manchester.

When the sorry looking band of EDL supporters showed up, the police found themselves forced into the role of their bodyguards as entire Manchester raged against the audacity of a cult of hate breeders to infiltrate their city.  As EDL protesters chanted tauntingly:

“We’re Manchester! Who are you?”

For me, this memory will forever be etched as a brief glimpse of the human collective when it rises above its petty, self imposed divides.

Even in times when the British government was ridiculously exaggerating the threat of terrorism to Britain and when the impending economic crisis was already rife with hostile sentiment towards immigrants, the British public could still see a conflict for what it really was. More importantly they recognised the importance of providing a united front. They foresaw that the same government which could endorse the criminalisation of a religious minority to justify its military misadventures and economic failures could very well turn its guns against them when their interests dictated it.

Tragically though in Pakistan, Governor Salmaan Taseer’s assassination did not unify us in our condemnation of the murder of a human being in the name of our faith. Instead, it left us divided. It left us questioning whether it is indeed blasphemy to question the blasphemy laws; whether a person’s perceived morality entitles him to the right to take a life; and most tragically whether it is even in our common interest to be united for this cause.

On that day in Manchester, the British public, by presenting a defence that was so diverse and inclusive of every ethnicity, class and most importantly religion, stripped EDL’s campaign off its religious garb and exposed them for what they really were – forcing even the most biased news networks to admit that the divide was not between Muslims and non Muslims, but between EDL and Manchester.

Today in Pakistan however, it would be our greatest failure if we played into the hands of our ‘EDL’; if we fail to strip them off their religious garb; if we fail to stop them from making a mockery of our religion; fail to not recognise and speak up against an injustice setting a hideous precedent; and most importantly if tomorrow when the world looks back at this juncture in our history, because of us and our collective paralysis, they will not remember it as the time when Pakistan stood against religious intolerance and fascism, but when it began its dissent into it.

A development activist based in Lahore. She is also training to become a documentary filmmaker.

10 travel tips for the desi explorer

What Al Jazeera did right: This revolution was televised

Love in a time of rishta aunties