Who should be blamed for Punjab police’s inefficiency? 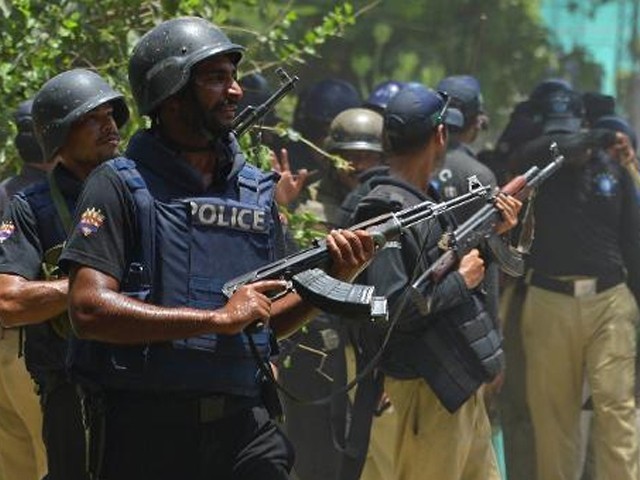 kistani policemen look on with their weapons during clashes with supporters of preacher Tahir-ul-Qadri in Lahore. PHOTO: AFP

The big story in the news recently has been the kidnapping of children in Punjab. This year, as many as 767 children have been abducted from various cities of Punjab, including the provincial capital of Lahore. This means that 767 families have gone through hell this year.

Last year, the number stood at 1200 kidnappings. Bear in mind these are just the reported numbers. All this points to organised crime rampant in Pakistan’s largest and supposedly most secure province. What, one must wonder, is the Punjab government doing and where are its law enforcement agencies, especially the police?

A word about the police first!

There have been media reports that there is a dearth of Superintendents of Police (SP) in Punjab. As many as 70 SP slots are currently vacant in the province. An SP provides essential leadership to a police in a district. Without the SP rank officials, therefore, the police force is likely to be leaderless and rudderless. This is reflected in the declining performance of the police force all over Punjab.

According to the statistics uploaded on to Punjab Police’s website, there has been a significant increase in crimes reported till June 2016 when compared to the same period the previous year. The total number of crimes reported till June 2015 was 194,552. The number of crimes reported in the same period this year was 201,839. So, if there was any expectation that the current government would bring the burgeoning crime rate under control, quite the contrary, it has been moving in the opposite direction. The police force, therefore, needs urgent attention. The right men and women must be deputed to it, to ensure that the force is ably led.

Much of the focus of the police force has been on security, especially against terrorism. This has also meant that a great number of the policemen and policewomen are busy providing security to VIPs and the like. Terrorism continues to be a major anxiety and it is understandable that great effort is expended to prevent it. Punjab, and indeed all of Pakistan, needs to combat the menace more smartly and efficiently than has been hitherto done. Why is it that one hardly ever comes across a policeman in a city like Dubai and yet that city continues to be almost crime free? The same is true of cities in the US, China and Britain.

Public places in most of these countries are not cordoned off with roadblocks and three or four policemen randomly checking cars for security. Yet the crimes rates are lower, few incidents of terrorism occur and one generally feels safer there at night than in Lahore or Multan. There must be something that they are doing which we are not doing right.

If we can build metro stations and the orange line modelled after the more developed countries of the world, surely we must also figure out ways to secure the city spaces effectively as is done elsewhere.

All of this requires strategic planning and proper leadership in the police. The police force, more than any other department, in any part of our government needs clear thinking men and women of vision who can get the job done the right way and the most cost efficient way. The 70 SPs who are going to be appointed, must be drawn from the best available individuals and not on the basis of nepotism or sifarish.

The Punjab Police must develop a panoptic system engulfing the cities, so that it can respond to crimes committed effectively with minimal effort and within a short period of time. Jeremy Bentham, the great legal philosopher in the 18th century, designed the Panopticon as an institutional building where a single watchman could see every inmate. That revolutionised the way we thought about not just prisons but society as a whole. It may sound reductive and mechanistic, but the truth is that developed world has applied the same concept to citizen policing.

I do not mean that privacy should be discarded altogether as a concept, but that the public space – where crimes are likely to be committed – is under the ever watchful eye of the law enforcement agency so that any criminal anywhere would know that he might be watched.

Computers, CCTV cameras and the enormous advancement in surveillance equipment affords us precisely this opportunity to make our cities safe for its inhabitants and after that is the supreme reason we live in societies in the first place, foregoing some of our liberties for security.

The downside of the panopticon idea is that it might empower unscrupulous individuals within the police force and they might misuse their position to pry into the private affairs of citizens. This is why, simultaneously, the police force has to be trained in a way that ought to respect the personal freedom of an individual citizen. Courts must be ever vigilant to protect the individual citizen against any official abuse. At the same time, the Pakistan Penal Code, 1860, must be thoroughly reworked and cleansed of archaic laws that have no place in modern society.

The Punjab Police, and indeed other police forces in the country, must understand that their responsibility is to fight crime and provide security, and not act as a check on vice or sin.