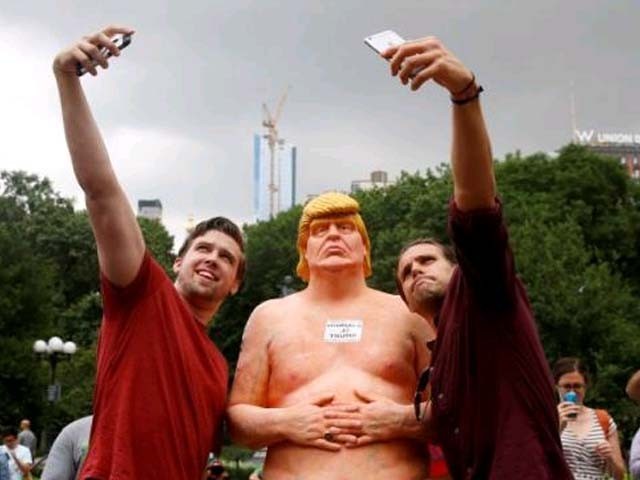 People pose for selfies with a naked statue of Donald Trump that was left in Union Square Park in New York City. PHOTO: REUTERS

Let’s face it, there are not too many of us out there who are fans of Donald Trump.  I am fairly certain even his kids cringe deep inside right before he goes on stage and opens his mouth.

We have all been disgusted when he has made sexist and derogatory comments. His constant bigotry against Muslims is worn on his sleeve as a symbol of pride. He has made fun of people with special needs and has even gone far enough to make hypothetical comments about shooting Hillary Clinton; and then even bragged about that comment having gotten him even more votes. He has used tragic events to say, “I told you so” and belittled soldiers of his own country.

Calling him a vile scumbag would actually be something complimentary as compared to the names he actually deserves.

So, members of INDECLINE decided to do something about it. They wanted to humiliate him and showcase his true identity to the world. For this, they kept in mind the children’s story The Emperor’s New Clothes.

Thus, life-sized statues of a very naked Trump went on display in public spaces in New York and four other states in the US.

The statue was called “The Emperor Has No B****’s,” which they made evident in the statue itself as well. He had scowling eyes and skin filled with varicose veins thick and ready to burst. Along with that was a huge protruding belly and a flat wrinkly behind… or tashreef if you like.

Many people laughed, poked fun, took pictures, made obscene comments about parts of his anatomy and all was still well in the world. Basically, the only way they thought they could humiliate him was to strip him and make fun of his supposed body.

Now, let’s flip this a bit. What if this had been done to a woman? A naked statue of a woman, plastered with issues that people struggle with in real lives; made her look fat and deliberately old and wrinkly. Imagine if someone had done this to Hillary Clinton.

I am pretty sure, the world would have erupted with anger about how not funny it is; how the woman has been reduced to just a body, a piece of meat. How instead of going head to head with her verbally to make a point, they instead body shamed her.

Yes, if it had been a woman, the artist just might have been looking for a new job right now. Instead, he probably just hiked his fees.

So what is wrong for a woman in this regard, should be wrong for a man too, shouldn’t it?

If they chose to fat shame him, it means they had nothing intelligent to say to debunk his words. They had nothing, so they just pretty much went along with,

Also, are they insinuating that it is just bad people in the world who are fat, old, ugly and wrinkly? Varicose veins only pop up on evil?

I know there are a lot of people who swoon over Justin Trudeau and think him as nothing less than a Disney Prince but it is not his looks that that made him a leader. We don’t choose people to run our country based on their looks. If that was the case, then we might as well just hold beauty pageants and hand the country over to the winner.

Making fun of Trump’s body does absolutely nothing to him. It does hurt people with that same body type though. For Trump, it gives him sympathy from his supporters that people are so desperate that they are resorting to bullying and body shaming.