The final battle of Afghanistan: Not yet 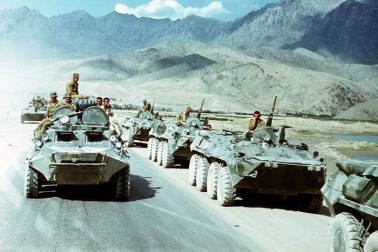 The Afghans have a history of fending off invading armies.

Let us forget for a moment what happened with the imperialist forces in the past centuries of their adventurous planned invasions in this region, and their outcomes.

The longest war has apparently come to its much awaited conclusion as expected. Until today, 70 per cent of Afghanistan is still under the control of the militants who are ethically, morally, and religiously motivated to defend themselves from invaders, while only 29 districts are under the Karzai government, which is also not 100 per cent secure. For the Afghans it is not the first time that they are brutally kicking out the foreigners. This, however, will be the toughest attempt ever. To many in the region, it would be great to see the Nato/Isaf forces go “up” either by helicopters, airplanes or a bullet to the head.

Nato supplies are being disturbed and attacks on the convoys are becoming a norm which again not only gives hope to the fighters, but also allows them to tighten the circle around the government controlled areas and regularly bombard them with rockets and light or heavy ammunition which they somehow manage to get hold of regularly. Out of billions of dollars spent in Afghanistan in the past 10 years, it is known that the major chunk has been used for the forces, private armies, and foreign consultants, while the infrastructure of Afghanistan remains in a dilapidated condition, rather worse than when this all started 10 years ago. There is zero security for civilians, and sources of income are burdened and slashed by mischievous offers for substitute income, which had not materialized until now, and so it is always better and secure for the civilian to submit to the militants, better known as “freedom fighters.” Comparatively, Pakistan Army has completed 70% of reconstruction and rehabilitation work in South Waziristan operation started last year. Swat is back to normal and recently enjoyed thousands of tourist. The region is however still under the army’s watch, because Pakistan is still in a state of war, and fear of local militants returning prevents the army from leaving it unattended.

Since the change of government in UK, the situation has gone from bad to worse. Sixty-five per cent of the English want their troops out of Afghanistan without any ifs and buts, and their new PM has reciprocated the public demand by telling off the Americans. Other small countries working on development projects are also morally dead and the will to remain and fight the fighting networks in Afghanistan is at its greatest low. After 99 casualties since 2001 the 1,000 British troops stationed in Sangin, in Helmand province will start moving out and be replaced by US troops, under the “re-deployment” strategy. But the 312 total dead of British military, made this place the deadliest of all.

The US sees this, and is seemingly concerned about the exit strategy they had in mind which “may” start from July next year. This all depends on how effective they are at handling the next 12 months of rigorous fighting with the locals, as by the end of August the total strength of the US forces will reach to 150,000 personnel.

The recent discovery of minerals, gas and oil by the US geological survey released by the permission of the Pentagon is mind boggling, and the pieces of the puzzle has confused everyone a lot more than it just being ‘good news’ for Afghanistan. The lowest conservative estimates are a trillion dollars which may vary up to $3 trillion. The series of events right after this breaking news cast doubts in everyone’s minds.

Now, that is a lot of money to pay back Nato expenses incurred during the war and also re-build Afghanistan to a peaceful and a flourishing country, if the coalition is able to strike a deal with the fighters with help from Pakistan’s ISI. This is something that looks impossible and carries a great deficit of trust, between the Nato forces.

Richard Holbrooke acknowledged Pakistan’s efforts and promised us that this time they will not turn away and leave us looming with disaster and refugees like they did after the Soviet occupation was crushed during CIA’s Jihad. He also gave a hint that it is impossible to strike a deal with the Haqqani network in Afghanistan, while maintaining the pressure on us sublimely over the Iran-Pakistan gas pipeline as Iran is awarded with more sanctions, which are again useless and could not stop Iran from carrying out its nuclear energy ambitions.

A well known British Writer and Historian William Darlymple compared the events that took place in Afghanistan against the British forces (the private army of East India Company) along with troops from India in 1842 to 2010 when 40,000 troops lost their lives during the first Afghan invasion. This war resulted in humiliation of the West where less than 100 soldiers survived and made it home in one piece. He labeled the Afghan warriors as ruthless, brutal and utterly motivated, and also confirms that the events occurring now in Afghanistan are shockingly similar to what led to the collapse of colonialism in 1842 from the Anglo-Afghan war. According to Mr Darlymple, the Nato forces do not stand a chance of safe exit from Afghanistan. This is what the majority of the population from around the world would like to believe as the eventual fate of the occupiers during the “Final Battle of Afghanistan.”

All of a sudden we hear that the top commander General McChrystal screwed up somewhere and is relieved of his duties a few days later because of a verbal vomit of opinion about the Obama Administration which happen to be in presence of a reporter from a well known American Magazine. He is quickly replaced by the most trusted General Petraeus within days. This was a shocker to all as in spite of the current situation, changing the top army man at this stage because of a slip of the tongue, from the champions of democracy, is really astonishing to digest. There has to be something more behind it, even though the General is very sorry about it. Not much happens, and very calmly all the stake holders accept this dramatic change after assurances given by the US.

Few days later General Petraeus after taking charge as the commander of operations in Afghanistan tells the US Senate’s armed services committee that the deadline of July 2011 for withdrawal of troops should be registered as “highly flexible.” He also informs the American people that in the coming days the fight may get worse, and it will take many years before the Afghan forces are fully trained and equipped to carry on the responsibility of policing their own country. As usual the American public is again bombarded with mixed messages from their own officials, and it is not clear if they are really interested in leaving the country. Is this because of the new found mineral wealth or do they really care about the security of the country so that America can remain safe from attacks from Afghanistan?

President Karzai has come to terms with the situation after losing faith in the West’s abilities to bring peace and is very much interested in shaking hands with the fighters who were originally installed to counter invaders. He appears to have convinced the Americans to use the muscle and might of Pakistan’s ISI in negotiating a power sharing formula with the different networks in Afghanistan. The statements coming from his law makers for Pakistan, criticizing its internal control on militants, as the proposal for opening a trade route via Pakistan to India was rejected, are not so encouraging for ISI to really “help” them out anymore. Look who’s talking.

CIA’s director Leon Panetta, however, is not sure of this deal and does not believe that there can be a table solution to this mess created 10 years ago. As the Indian friendly head of the spy agency and the interior minister of Afghanistan resign, it is becoming clear what Karzai is desperately aiming for. The Tajiks and the Hazarawals are also not included in the count and may have to suffer the wrath of the Haqqani networks once the deal is done. While Pakistan may not be able to influence the Taliban networks, it may result in Tajik-Pashtun violence in the coming days which has the potential to spill over to other areas.

As Admiral Mullen works to regain the lost trust of the Pakistan, he has a long road ahead in building the confidence which lacks between the US and Pakistan, while requiring help from Pakistan to dismantle the Al-Qaeda and Taliban networks to bring peace to this region. Maybe the US should look at the history and origins of Al-Qaeda and the Taliban, instead of cornering Pakistan every time and find the people who are funding them, before killing the fighters.

So far it appears that it will be a very hard next 12 months for Afghanistan and Pakistan. In case the US is beaten and has to evacuate from a miserable defeat, the secular Pakistan needs realize what it will be facing. And then, for India, as they continue with the media campaign to defame Pakistan, this is all what I can say for our neighbors: http://youtu.be/JrcI1IDYKps