“Young woman, you’re quite attractive. Will you marry me?” asked the professor 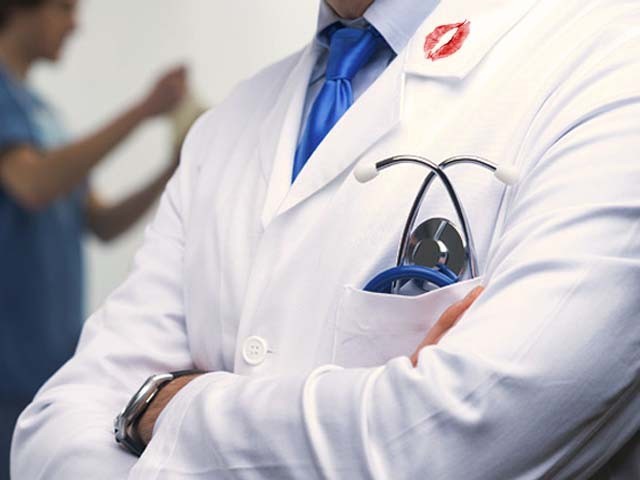 There was a certain assistant professor in the hospital affiliated with my alma mater. He was notorious for asking for sexual favours in return for small academic concessions.

It was during my student life that I heard some of the most scandalous stories involving female medical students and senior doctors. I didn’t take them seriously at first; my mind refused to believe that depravity of such magnitude existed around me. I was naïve and obviously wasn’t looking in the right places; perhaps it was because I wanted to keep believing that my fraternity was incapable of the horrors I had heard of.

After becoming a part of the system, I had to eventually face reality. The stories were true. The perpetrators were seemingly normal individuals, who had happy families and multiple children. But that fact didn’t seem to stop them.

Our society is changing in a way where morality is slowly becoming insignificant. Many of the scandals undoubtedly involve consent from both parties – females are not always the victims as some people would have you believe. But that doesn’t change the fact that an overwhelming majority of cases that involve harassment and abuse have female victims.

The relationship between a senior and a junior in our profession is thoroughly vertical – the junior is at the receiving end and can effectively be deemed powerless in the whole interaction. The senior often enjoys a disproportionately authoritative position. Whether it is the issue of compensating attendance, ward tests, signing off ward cards, the OSPE/viva exam in annual professionals, or taking leave from work; juniors have to fawn over seniors so they accommodate them in their time of need.

This is where things begin to go wrong. Seniors don’t always accommodate the juniors merely out of courtesy; it is a transaction.

They ask, whenever the opportunity arises, what the junior has to offer in return. Sometimes it is just an innuendo, most times it borders on sexual harassment, and some are instances of coercion and blatant abuse of authority. These ‘negotiations’ usually take place via text messages or phone calls. Cell phones and harassment have developed an unholy association in our society.

There was a certain assistant professor in the hospital affiliated with my alma mater. He was notorious for asking for sexual favours in return for small academic concessions (covering up deficiencies in attendance, basic clinical skills and so on). He was unmarried, so he saw a potential life partner in every student. He proposed to almost every girl whose looks were above average (from a man’s point of view). Unfortunately, he ended up obsessing over a certain girl from my batch and left no stone unturned in wooing her. At first, he tried to lure her in by making his usual offers. In the end, when nothing paid off, he resorted to threats,

“I will make sure you do not clear the final viva voce as I have the professor’s ear and he never passes students whom I report against.”

The matter ended with her getting detention (two consecutive failures in medical school earn a detention – you have to appear after a year in the next annual exam, wasting one year), which ruined her career.

Another alarming story was about a renowned professor at a teaching hospital in a south Punjab metropolis. While conducting annual professional exams, he was completely taken by a young female candidate who was appearing before him for the viva. The first thing he asked her was,

“Young woman, you’re quite attractive. Will you marry me?”

The girl was obviously dumbfounded. She mustered up all her courage and asked him what he meant. He asked the same question again. After having understood what he meant, she rightfully snubbed his shameless impudence. The examiner went on, unhindered by her sharp rebuttal.

“Even if you don’t wish to marry me, just say that you will, and I will let you through,” he ‘generously’ offered.

This offended the lady even more, but she stood her ground. She failed the annual exam, was made to appear before the same examiner in a supplementary exam, and ultimately got detained. Her ordeal didn’t end here.

She went from one med-school to another, but the wicked professor followed her like a shadow. She had to appear before him yet again, and this time, he came in the capacity of an ‘external examiner’. She was handed another detention which completely broke her. She dropped out of med school, in hope that this would conclude her suffering, but fate wasn’t on her side. The professor kept pursuing her and succeeded after a couple of years. Her parents assented to the proposal under the burden of their financial woes.

During my house job, one of my colleagues (from a private med school) confided in me and told me yet another appalling story. A senior told one of her close friends (a boarder) that if she ever wanted to avail a week long leave (she needed one to visit her ailing father), she would have to go out with him for dinner.

Instead of guiding her to obtain leave through proper channels, he exploited her in the worst possible way. She finally agreed to his offer and went out with him for dinner, after which he expressed his interest in ‘taking the date further,’ which she refused.

He ignored her refusal and forced himself upon her. The senior ended up granting her leave, but upon her return, he started blackmailing her (threatening to make that particular night’s events public). He harassed her for a year before ultimately losing interest in the poor girl.

Unfortunately, there is an entrenched culture of institutionalised eve-teasing and catcalling in our hospitals where senior consultants pass casual, unwarranted, and inappropriate remarks towards female colleagues. And they (the victims) have to keep quiet about it, lest they be targeted and victimised further by the people in power.

Regardless of the reasons why juniors agree to fulfil inappropriate demands (like meeting alone and giving certain ‘favours’), it is unethical, immoral, and outright criminal to abuse your position of authority to extract such benefits. And believe me when I say this, these practices are frighteningly common in our hospitals and med schools.

A setup where seniors, who ought to teach medicine and behave as ‘spiritual fathers’ (from a religious point of view), exploiting female students to the extent where some have even contemplated suicide, makes you rethink your own position.

We need to ask ourselves the following question,

“I, being a part of this system, have allowed this to go unchecked, but how long before your sister or mine end up becoming a victim?”

Despite all the recent laws protecting women, the situation on ground seems rather bleak. I feel the only solution to this problem is awareness through social media. Naming and shaming these predators is the only effective deterrent. We need to come forward to help and encourage our female colleagues to speak up. Do not let your silence become a weapon for these animals.

The author is a doctor and an aspiring Oncologist. He is also a writing enthusiast.