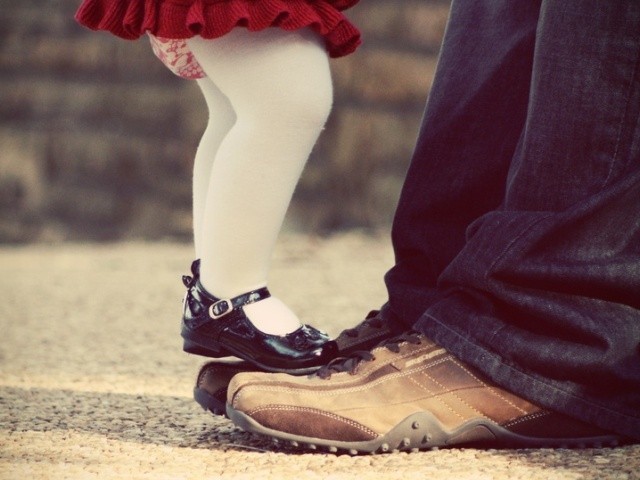 It wasn't him taking care of her. She was trying to comfort him. PHOTO: PINTEREST

His daughter knocked on his door; only once. It was time for work and her school. He got up, stretching here and there, listening as individual muscles came out of slumber. After he was ready, he headed to the kitchen and opened the fridge. Each item appeared to be dripping. The electricity had been out throughout the night. He reached for the night’s leftovers and packed their lunch, first for her, and then for himself.

She came to the kitchen shortly after. She was well-aware of her father’s strategies and how she ended up getting more of the leftovers. However she used to silently weigh each box when her father was busy elsewhere, and put one inside her school bag. Her dad scolded her daily for giving him the heavier box, ‘but the boxes look the same,’ she used to say. And he just shook his head and always reminded himself to put a sign on one of the boxes, but he would forget. He was 59-years-old now.

After dropping her to school, he continued towards his workplace. He parked under the Qainchi Bridge, right next to the water pump. He changed his clothes, covered his mouth with a handkerchief, got his broom, and started to work. When he cleaned his designated streets, he always had his left hand folded behind him. He made sure not a mote of dust remained on the road, and though, now as age had begun to catch up on him, it was hard for him to bend his back to get a good horizontal sweep, yet he still tried until the faded colour of the road regained some shine again.

Some of the dust sometimes rose and scattered itself on the oncoming traffic, and as they passed him by, he heard the heartbeat of the road again. It was a very fast, but extremely tired beat. And he wondered whether something so relentless could ever be exhausted? He didn’t know.

He looked again at the cars, the bikes and the buses. And the passengers; people passed him by, always in a hurry. He had heard from a local saint that the road revealed people. And he was a witness to this daily. The way they waited at the traffic signal, and how after each accident or a close shave, he saw the capacity for people to abuse, hit and punish but also to forgive. He never knew what to make of people.

Over time, he had seen them move not only forward, but also upwards. Those who had been driving a bike very soon had a car. They wore new, ironed clothes, and their eyes held a new shine. But there were only some who moved upwards. A lot of people just stayed where they were; with the same number of creases on their clothes and identical expressions, their coloured clothes giving up their colours. And they stood, as always, on the same rung of the social ladder.

And so he looked back at his ride, his cycle, which had been with him for the last seven years, and before that, another cycle of the same brand. And at times when the traffic died down, and the road sighed and whispered, he responded with his own grief, and wondered which rung of the ladder he stood on, and whether he had been left behind by the world, every day.

Was it his fate to clean the same two streets for the last two decades? Initially he had wanted people to notice and acknowledge the daily work that he did, for a random compliment on the spotless road, but with time, his desire for praise and recognition waned. He was especially upset about the lack of conversations. They never occurred without a purpose, now. Each conversation he overheard or had with someone felt like a bargain; words coming forth only to extract information, favour or praise and disappearing as soon as the need was met.

He thought about the time when conversations held anxiety, concern, fear and vulnerability. And it was considered a strength to unload this box of feelings in front of a friend who would then help in picking away at the box. Silently, constantly.

He never took these thoughts or concerns home to his daughter. He made sure he dumped them. There was a huge dumpster close to the water pump, and he made it a rule to pass it before heading back. Though, the dumpster was always brimming with trash, his thoughts easily slid between the wastes, and his mind heaved a sigh which only the road heard. Sometimes, though, his thoughts automatically transferred into the eyes of people who passed him by, mostly children, because they looked at him longer than anyone else, and with a greater respect and understanding than anyone else.

When he reached home, his daughter was already sitting at the table. Like always. She walked back home with her friends who lived in the neighbourhood, though he was yet to meet them. She was full of stories from the school, the amount of fun she had with her friends, the questions she had asked her teachers, how happy her teachers were with her and what her friends gossiped at times on the way back. It always gave him immense pleasure to hear how much she enjoyed being at school. As soon as she finished, she asked him to share his day’s happenings.

And just to ensure that his day was also eventful so she would not feel uncomfortable sharing her own excitement, he made up conversations and characters that he had never heard or seen. He loved seeing her curiosity as he told her about the variety of people who stopped each day to compliment him for his work, who sometimes asked the strangest questions and revealed odd and funny facts about themselves. And when she laughed, he laughed with her, because the sincerity of her laughter and interest made him want to believe in his own tales.

When his stories began to lose the plot, and when the characters became one-dimensional, she helped him continue these stories, by suggesting twists to the plot and adding depth to his characters. She was the co-author of his tales and she was the reader, the only one he wanted. And this story-telling between a father and daughter, built on imagination but supported by love, was what sustained their lives. It’s what he looked forward to every evening at that table.

Months passed with this storytelling ritual growing in strength and his stories growing more complex with twists and turns. But one morning when he dropped her to school and was just about to cycle away, he met one of her school teachers. She had approached him,

“Can you come inside the school to speak about your daughter?”

Once they were inside and the school bell had rung, she invited him to the staff room.

“Has your daughter not given you our notes? We have attempted to reach out to you several times, but we have never heard back from you.”

“I’m sorry, she never told me about this. What happened?”

“Quite a few things. To start with, she always walks back home alone, and refuses to go with the other girls in her neighbourhood. In classes, she doesn’t speak a single word with anyone nor does she ask any questions, though her written work is decent. Her behaviour is too passive.”

He thought he had not heard each sentence correctly, so he asked her to kindly repeat what she had said. As she repeated and talked about his daughter’s introversion, he cut her off and asked about her friends whom she mentioned on a regular basis,

“We have no students with those names.”

Then he asked about other facts that she had told him about the school, and again it met a dead end. He smiled.

As he walked away after the meeting, he thought how mistaken he had been about his daughter. She never wanted him to feel what her day was like. It wasn’t him taking care of her. She was trying to comfort him.