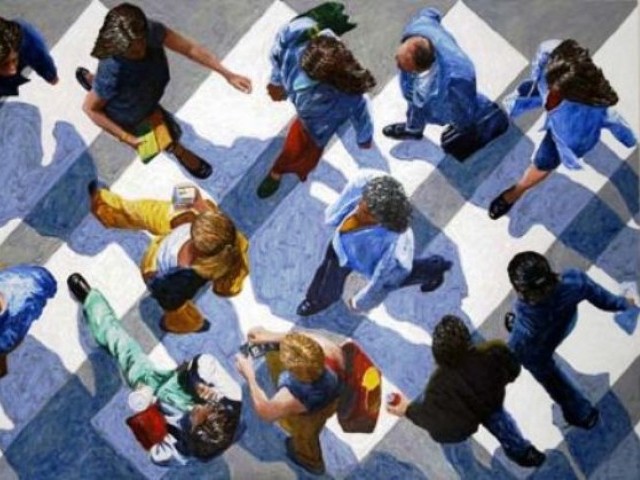 The impulse to cross a road, to ford it, is almost primeval.

Footpath walkers or street corner loafers, pedestrians to the genteel public, these pavement grinders are a contemptible lot.

One will not recourse to anathema or expletives here, for it is not the place, contenting oneself instead with whatever is uttered under the breath but one feels a sheer tyranny at the hands of these seemingly unassuming ‘bystanders’.

Do not of course mistake this for classicist spiel, for one’s issue is not say of condescension but the mere pragmatism of these people and the jeopardy (what a reversal!) that they put motorists in.

The impulse to cross a road, to ford it, is almost primeval, as if deemed at creation. Within the body of man, within his very heart, there is a stirring, a steady beat. It pulses with the urge to extend ones reach, to be monarch of all that is surveyed. Man’s prerogative is progressive, forward.

A road must be crossed, it exists to be traversed. The philosophy of man exists to overcome, a road. It is quotidian, yet noble – a human achievement.

And yet one finds dodging these feckless creatures on the highways a minefield of probability, bumper to body at any given moment.

There he stands on the side of the road, this noble son of man, looking across, and his eyes only on the other side, possibly an amour or a cache waiting for him, such the intent.

But between this daredevil and possible riches or love lies a gauntlet, with at least a ton of metal hurtling towards a given point every instance or so, the physics of this encounter not being with the pedestrian, the chips down, his luck up.

At this point, one could easily continue with allusions to rag dolls and the word ‘flung’ somewhere before but one will stop, gallows humour for some other time.

The pedestrian has taken it upon himself and, one must add, herself to run the gauntlet of our highways with devil may care bravery, love, life and limb as if a passing concern. What compels these individuals to run such risks?

Men seem to have a little more spirit in their mad dash, as gripping the sides of their coat, they sprint, heads bowed down as if trying to avoid a walkway. Women, literally saunter across the road, this flying in the face unbelievable.

Countless times has one seen, women wrapped up in their modesty, walking across, with all the time in the world, oblivious as to the purpose of a road, possibly under the assumption that by merely being the fairer sex, brake pads would be considerate.

Sometimes these dolts bear infants trailing besides them, idiocy getting the better of innocence.  Both sexes have been seen to raise plaintive hands, like in beseech to ask the dear driver to slow down, so that boar style, family members from end to end, may cross the road.

But wait, what is that in the distance? A monolith that bridges the road? What an odd construct? It rises out of the ground to briefly suspend in the air, only to come down the other side. What do you think it was made for? And what’s that? A primitive artwork of the kind that paints sections of the road black and white? What are these for? Ah, yes! Needless expenses and helping a contractor relative are at play again. What a mockery of a system we have!

In foreign lands, this brazen crossing at unmarked points for pedestrians is a penalised offense known as Jaywalking. Offenders are usually fined with warnings. Something to this effect needs to be instituted by the traffic police or at least awareness of the matter need be raised.

If like little children, pedestrians are ignorant or careless then they should be taken by the hand or the ear and helped across the road.