Pakistan’s victory at the Oval was the best Independence Day present we could get! 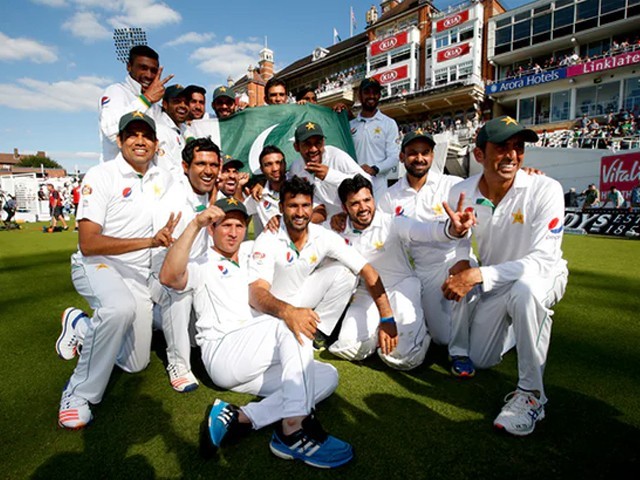 Yesterday’s Test match was a befitting conclusion to one of the most engrossing Test series played in recent times. A 2-2 draw in the Pakistan-England series seemed like an appropriate result for both teams who played their level best. It was also an incredible Independence Day present from our team to Pakistani cricket fans; it couldn’t have been timed better.

Yasir Shah was in imperious form with the ball for Pakistan, taking three wickets in just seven overs on day three.
Photo: Reuters

Misbahul Haq dedicated Pakistan’s memorable victory at the Oval yesterday to the late Hanif Mohammad, who passed away a few days ago. He was an integral part of the Pakistan cricket team that toured England in 1954. Apart from Fazal Mahmood’s unforgettable 12 wicket haul, Hanif’s direct hit from the point region that led to John McConnon’s run out, (resulting in victory) were the highlights of the match. Pakistan managed to level the series and became the second team, after Australia, to win a Test match in England on their inaugural tour.

When Pakistan was on their way to England for their Test tour, chances of victory – or even a draw – seemed like a far off dream. But, as always, Pakistan proved us wrong. Our team played exceptionally well, (barring the Old Trafford Test) which resulted in them bagging victories at Lord’s and the Oval. If it wasn’t for a few minutes of carelessness at Edgbaston, Birmingham, Pakistan would have won that Test as well. Edgbaston is an unlucky ground for Pakistan considering we’ve never won a match there. On the other hand, the Oval has proved to be the luckiest ground since it is the only venue in England where Pakistan has won more matches than England has.

There were quite a few outstanding moments from the match at the Oval. The following are a few of my favourites.

After the demoralising Edgbaston defeat, the scorecard read 1-2 (Pakistan-England). Pakistan either had to win the match or call it a draw in order to save face from a humiliating defeat.

England won the toss and elected to bat first, which Pakistan’s bowlers took advantage off since they restricted England to 328 on a batting pitch. Had our fielders not dropped catches, England’s first innings may have been restricted to an even lower score.

When our batsmen walked onto the pitch to bat, you could tell they were ready to put up a fight. Asad Shafiq’s century and a brilliant double ton by Younus Khan allowed Pakistan to lead by 214 runs, which eventually led us to victory.

Before the Oval, Younus was having a tough time at the crease which led to a lot of criticism. His dismissal rates were below average and many even suggested he should be benched, but yet again, the cool and calm Younus answered with his bat, in the form of a double century.

Our victory at the Oval wasn’t just a one man effort (which it sometimes is). Rather, it was a team effort. Our tail-enders put up a good fight, found confidence in Younus as their batting partner and steered Pakistan towards a great lead.

Another favourite moment was Yasir Shah’s exceptional performance (which was appreciated after his dismal performances at Old Trafford and Edgbaston) which restricted England’s second innings to 253 runs and paved the way for a series leveller for Pakistan. If it wasn’t for Jonny Bairstow and Moeen Ali, England wouldn’t have been able to get to that 253 as well. England’s deep batting line-up has always been an issue for Pakistan.

Moeen Ali and Jonny Bairstow at the close of play today.
Photo: AFP

Pakistan has had a great record with Test matches so far. 2010 onwards, we won six consecutive Test series where we beat Australia thrice, India twice and Sri Lanka once. This series may have been a bump in the road, but at least we managed to level it rather than lose it entirely.

What concerns me most though is our skipper’s decision.

One of the biggest questions looming over Pakistani cricket fans is whether Misbah will be retiring or continuing his stint as captain. He’s one of the greatest captains our team could have, but age will be a major factor in his decision to stay on or retire. At 42, he has led Pakistan to great victories and managed to raise our ICC Test ranking to number three (had the ranking system not been so complicated, Pakistan would have been number one right now).

Misbah has had an unfortunate past in his Test career, where he faced a four years break during his peak years. But since his return from this break in 2007, he eventually became an integral part of the Pakistan Test squad. He, along with Younus Khan, carry the burden of Pakistan’s batting line-up on their shoulders. Photo: Cricket365

Other positives to take from the series were our new coach, Mickey Arthur’s, coaching skills, which will be tested further during the ODI and T20 matches. The induction of Sohail Khan and Sami Aslam also proved to be beneficial for our team, their individual contributions were tremendous.

But what let me down the most was Mohammad Hafeez’s performance. Neither his batting, nor his fielding was up to par. Various TV anchors argued whether dropping Hafeez was the correct thing to do or not, but I personally feel it was.

Another disappointment was Mohammad Amir. His figures were unsatisfactory and his performance wasn’t as electrifying as everyone had expected it to be. We could be at fault for this as well, considering we hyped up his return way too much. We’ll just have to wait patiently for the next matches to see whether he’s still as good as he used to be.

The Pakistan-England Test series ended on a high note, but let’s not forget Pakistan has a gruelling Test schedule.

What our selectors need to adopt is consistency in selection. They have to have the correct vision in order to pick the right player for the right format. Iftikhar Ahmed is a case in point. I feel he isn’t Test material, but he may thrive in other formats.

Selectors also need to keep Younus and Misbah’s age in mind and find suitable, consistent, and reliable replacements and induct them in the team as soon as possible.

Let’s hope Pakistan performs well in the upcoming Test series to bag the number one position in ICC’s Test rankings.