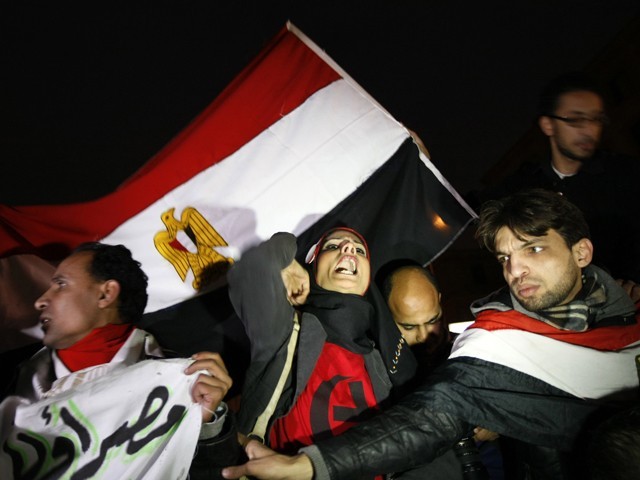 The gesture made by the Egyptian Muslims shows a ceding of the self to a greater cause.

Just before Christmas last year, I passed a group of children arranging themselves in two straight lines outside the big church in F-8, Islamabad. They had a special program planned and were waiting to welcome their guests with flowers. I caught a glimpse of laughter and nervous excitement and nearly smiled, before seeing the police van, ambulance and fire engine parked on the curb. Then there was a sudden stab of panic and I wished I could stop to usher them all inside.

“Please, God, let them be safe,” was all I could think on the way home.

Is it ironic to invoke God for protection of the God-fearing, against the God-fearing? What a strange time it is for children to be growing up in, when celebrating Christmas is a high-risk activity. In a badly fractured country where one is continually forced to pick sides, there is no telling who may become a victim of a sacred statement. Indeed, for a while it seemed as if this generation would never really know the meaning of co-existence.

Learning from Muslims in Egypt

Last Thursday, on January 6, 2011 however, something happened that restored my faith in humans and their capacity for nuanced understanding, at the individual and collective level. On January 1, a brutal religiously motivated attack left 21 dead in Alexandria, after which, thousands of Muslims all over Egypt offered themselves as ‘human shields’ outside churches on Thursday, the eve of Coptic Christmas, to protect their fellow citizens from any kind of external threat. It was a powerful, beautiful demonstration of tolerance, solidarity and good sense.

For some, the current state of affairs in Pakistan evokes nothing but anger. In the scuffle occurring on the streets and talk show sets, everyone is talking too fast to bother about understanding and reconciling with the minority Christian community. People are being shot for the side that they are picking in the politico-religious debate about Aasia Bibi and there is no time to look to the past for context or to the future for a way forward. It is too important for individual opinions to be heard and accepted as right – the short term and the self are too overwhelming.

Respect for the minority community

The gesture made by the Egyptian Muslims shows a ceding of the self to a greater, more far-sighted cause. It demonstrates humility in terms of respect accorded to the minority community, consciousness of a shared past, and a proactive willingness to build a shared future. At this particular point in time, we would do well to learn from them, before prejudice sinks deeper and begins to take the form of even uglier hate-crimes.

The children’s Christmas program passed without incident, or we may have found it in a dreadful corner of a newspaper. Perhaps we have God to thank for it this time – but unless the lines of dialogue and communication are opened, we are blindly consigning ourselves to an uncertain future.