After Taseer: Time to change direction 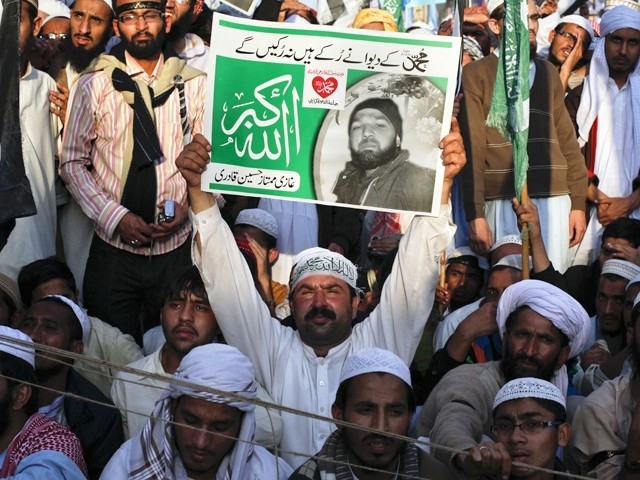 While the law recognises Qadri as a murderer, the streets treat him like a hero.

For many, the start of a new year marked the beginning of fresh hope that things would finally change in Pakistan. After all, December had seen a dramatic decrease in the number of suicide bombings in the country and the politicians had finally started arguing over public policy as opposed to security.

This new found optimism, however, came to an abrupt halt when Malik Mumtaz Qadri emptied the magazine of his brutally murdering Governor Punjab Salmaan Taseer, and leaving the ideology of Pakistan hanging by a thread.

What has followed since is a nation split in opinion over whether the action was murder or not. If common sense is to prevail, a common man taking up arms against another and bringing about physical injury, to the extent of death, is a straight murder case and against the laws of this country.

However, since the deceased was allegedly involved in a blasphemy case, many in Pakistan harbour the opinion that Qadri’s actions were justified and he should not only be relieved of his punishment but also be given a hero’s status. This particular clash of opinion has raised a very important question for Pakistan to ponder over. What is the road ahead?

Aftermath of the murder

The moderates within the country have taken up the incident to bolster their bid for the amendment of Pakistan’s very controversial blasphemy law, a stance which has led to an angry, and somewhat violent, reaction from Pakistan’s majority masses.

Minorities are quiet altogether so as to avoid the wrath of local mobs celebrating on the streets after the supposed death of an aide to a blasphemer. What we see is a nation in tatters. Different groups of people belonging to different social classes all going against each other in what has become a violent free for all.

There are those who claim that the happenings within the country, the death of Salmaan Taseer included, are part of a bigger conspiracy to deface Pakistan and devalue its people while another section believes that losses in war are expected and that such incidents aren’t a reflection of Pakistan’s social values. This out-pour of random violence does not define the motives of Pakistan as a nation.

While none of us will ever really know for sure why a minister was killed, the reaction of the nation to this incident has left a lot to be desired.  There are those amongst our political masses, such as Sherry Rehman, who have vocally condemned the barbaric nature of the crime, however  all religious parties have gone on to declare the actions of Mumtaz Qadri honorable labeling him a religious icon; a stance widely supported on the streets of Pakistan.

What has followed are huge crowds of people gathering around the courts of Pakistan where Qadri is to appear, celebrating and dancing, bestowing the culprit with gifts and fighting amongst themselves just to get a touch of his clothes. While the law recognises Qadri as a murderer, the streets (with the backing of our clerical leaders) have elevated him to the some sort of a divine man at whose feet people fall in search of blessings.

The majority has spoken

As a bystander to this uncalled for euphoria that has gripped the nation over a murder, I cannot help but question the stance believed and advocated by many of us, a stance which wholeheartedly conceives Pakistan to be a tolerant society. The death of Salmaan Taseer has succeeded to highlight that a significant majority of this country still harbors barbaric values and is intolerant towards the wishes and rights of others who disagree with them; that a major portion of Pakistan’s political and social bodies, educated and uneducated, are willing to take up arms against any who oppose them without a hint of hesitation.

Such outpour of sentiment has led to most minority factions to opt out of paying tribute to the fallen Minister because it puts them in direct conflict with the supposed rightist wing.

Insult to the minority cause

As a minority, I see the death of Salman Taseer as an insult to the minority cause in Pakistan. The man was killed for his stance on minority rights, brutally at that. The incident only cements the popular opinion amongst many of us that we’re considered ‘non-Pakistani’ in our own country. The widespread celebration and (lack of) condemnation supports the argument that the general public isn’t willing to budge from its stance on minorities. The height of intolerance is that they’re willing to react violently if changes are proposed (much less made).

An even more dangerous aspect to this whole scenario is the lack of acceptance of fault by our self labeled moderate classes. While the majority keeps on handing violent punishments and voicing intolerant opinions against its religious minorities, our affluent moderates maintain the stance that the actions of ‘one’ mad man doesn’t define a country.  Such ignorance to what is obvious only makes our country’s plight direr.

As a Pakistani in love with Pakistan but disillusioned by its people, I have to believe in finding change that has been very elusive so far. The road ahead would be to seek acceptance of our short comings; to admit to everything that we lack and to stop accusing other forces over actions which are under our own control. The road ahead would seek social and political condemnation and dismemberment of factions which preach and exercise sectarian hate and actively hand out head money over social assassinations; to have checks and balances over what is taught and preached in schools and religious centers. Only then can we expect the state of our society to change and for unjustly praised and barbaric assassinations to stop.

Pakistan has come a long way since 1947 and unfortunately most of it has been downhill. Nationalism isn’t about putting a cloak over all that’s wrong with our country or by choosing to ignore our shortcomings altogether and going on to preach fanciful ideas about what’s really not there.  Rather, it’s about accepting our own faults and putting them right.  After all, acceptance of fault is the first step to change and change is what is necessary.

A computer systems engineer who graduated from Ghulam Ishaq Khan Institute. His interests include politics, blues music and football. He [email protected]

The inadequacies of 'Financial Fair Play'

The lonely death of the protest song

Our universities are exploiting us