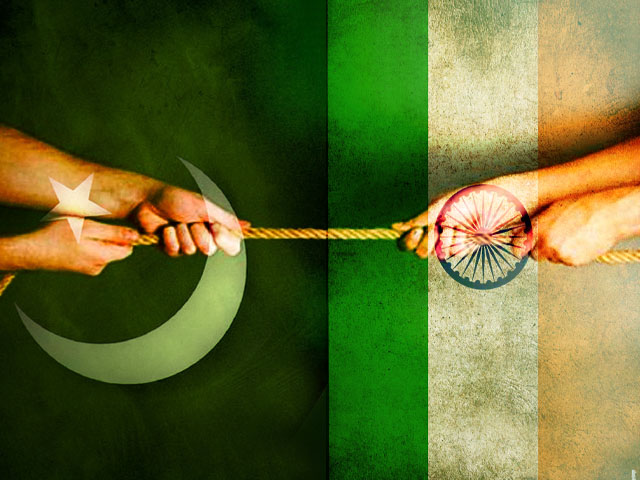 The pot and the kettle are calling each other black. The truth is that they’re both black – and neither of them is willing to accept it; just like India and Pakistan. New Delhi holds Pakistan responsible for spreading terrorism in its territory and Islamabad claims vice versa.

India is not willing to accept its faults in Jammu and Kashmir and alleges that the Islamic Republic is solely responsible for the trouble in the valley. Pakistan, on the other hand, says that the cry for freedom in Kashmir should not be equated with terrorism; the Islamic republic itself is a victim of terrorism and is as keen to root out this menace as India is.

The meeting of the South Asian Association of Regional Cooperation (SAARC) in Islamabad became a battleground for both nations, thereby denigrating the multilateral grouping that was, ironically, created to hone harmony and mutual cooperation among the South Asian nations. We hardly know what transpired in the two day conclaves in Islamabad. The media in both the nations is full of stories regarding the spat between Rajnath Singh, India’s home minister, and his Pakistani counterpart, ignoring the larger discussion that took place amongst the eight countries on the issue affecting the subcontinent.

As soon as he landed in Islamabad, the Indian home minister’s body language, along with the stiffness with which he presented himself shows just how juvenile Indian leaders can be while representing their country. There was smile on his face, there was no desire to connect with the host; the tense visage appeared as if it was a war-like situation. The entire visit ­to Islamabad– from entry to exit – he appeared to be calibrating moves as though he was enacting a drama and making sure that no step deviates from the written script lest the core audience of his theatrics get angry.

Singh’s demeanour can be explained by the fact that he belongs to the Bharatiya Janata Party (BJP) – a party that is very critical of talks with Pakistan and is known as an anti-Muslim grouping. Therefore it’s obvious that they, and therefore he, are more invested in the interests of the Hindu majority. For him to talk peace with Pakistan would have been a betrayal of his core voters. Singh was representing his hard core constituents – not India, when he led the team in the SAARC meet.

The Pakistani leadership also played to the gallery in their interactions with the visiting Indian leader. It seemed as though the Interior Minister, Chaudhry Nisar, too, acted in accordance to a predetermined script, keeping in mind Pakistan’s vulnerabilities vis-à-vis Kashmir.

When you approach a neighbour with such a narrow political prism and a pre-set frame of mind, the result will never be positive. There was no harm for both parties to accept that Kashmir is a matter of concern for both countries and needs to be resolved. Why do they both not acknowledge how redundant it is to constantly bounce the blame off one another instead of coming to terms with their own errors? Especially when there is more at stake than just one’s ego and pride. The tragedy is that, in this game of parochial politics and one-upmanship, the victims are the people themselves – of both, India and Pakistan.

Almost three generations have gone by and the two neighbours adamantly refuse to learn from history.

It’s not just Kashmir – the whole subcontinent is suffering as a result of this India-Pakistan animosity. South Asia has become a prisoner of conflict between India and Pakistan. To a large extent even Afghanistan is a victim of this tussle. For seven decades, the two half-brothers have held the evolution of the region as a viable economic and political entity hostage.

India shares the larger blame for being a negative force in the region. New Delhi refuses to grow emotionally; it is the same now as it was back in 1947. In fact, the situation is more volatile now than ever before; the distrust shared between the two nations has magnified beyond all limits.

This animosity has only bred terrorism, radicalism and fundamentalism in the subcontinent. Today, Pakistan is badly within the grip of all these evils. The monster that it nurtured as a state policy is out of control and become a threat to the larger society. India has also become a far more radicalised society now than it was seven decades ago. Hindu majoritarianism is India’s biggest threat today and, if allowed to proceed unchecked, the very idea of India is in great danger. The narrow nationalism is breeding a generation which shirks reasoning, hates rational argument, detests multiculturalism and feel shy of secularism.

At a time when regional barriers are breaking down in other parts of the world, South Asia is witnessing the emergence of even more physical and economic barriers despite the region sharing the same history and culture. This is anachronistic and completely out of sync with the evolving world. English daily, Hindustan Times, states that,

“South Asia regrettably remains the least integrated region in the world; an area that has 16.5% of the world’s population accounts for just 2% of the world trade. Economists point out that its intra-regional trade is less than 6% of its total trade and accounts for 2% of the region’s GDP.”

At a time when Asia is becoming the economic and political hub of global attention, the regional wrangling in South Asia limits the potential of such a vibrant territory. India is quite ambitious in its need to play leader in South Asia and emerge as an important political and economic player on a global platform. Unfortunately, its parochial vision in dealing with its western neighbour (vis-à-vis South Asia) limits its clout. It questions its potential to emerge as a serious geopolitical player.

India needs to demonstrate greater farsightedness in its dealing with Pakistan if it wants to be the leader of South Asia. Pakistan’s constraints are its low economic and political growth, and geopolitical wisdom informs that New Delhi needs a paradigm shift in its policy towards its western neighbour vis-à-vis other South Asian neighbours.

Kashmir is a challenge to the Indian democracy and its multiculturalism and religious tolerance. Without talking to Pakistan you cannot resolve the Kashmir issue. Therefore, engaging with stakeholders is the best policy forward. Pakistan also needs to show greater wisdom and flexibility in dealing with New Delhi. Many of its economic woes will go if it fosters lasting camaraderie with its eastern neighbour.