After Taseer: The birth of a liberal movement 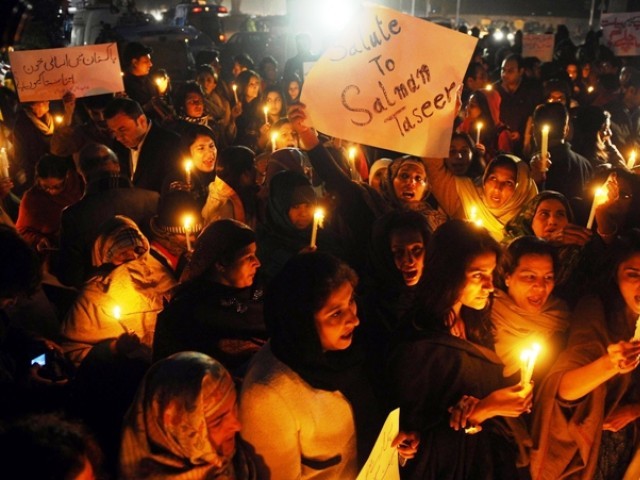 After Salmaan Taseer’s assassination, a clear line of distinction was drawn between the liberals and conservatives of Pakistan. This assassination will change the course of Pakistan’s history, and this is not an exaggeration. The outspoken Governor had flaws, but hypocrisy was not one of them. He made a promise to the minorities of Pakistan and fought for it till his last breath.

Whether his demand was legitimate according to the constitution of Pakistan or the Islamic law is beyond the scope of this article. Taseer has become a symbol for the liberals and Mumtaz Qadri for the rightists. The rightists had already declared their agenda while a new liberal movement was triggered.

The rightists want to see Pakistan as a theocratic state. The general impression the world over is that this will happen in the near future. However, there is a significant majority in Pakistan that does not subscribe to this idea. Even Pakistanis do not realize this because the liberals were a cowardly lot, until the assassination. Nobody noticed the liberal population because they have learned to remain silent and let the rightists, who have resorted to force, dominate. The reality is different, and is about to become more different. The liberals have seen firsthand what will happen to them if they try to express their feelings openly and they have decided to react.

Mumtaz Qadri was hailed a hero by the rightist groups. A segment of the Pakistani public celebrated the assassination and justified it on religious grounds. Then something unexpected happened. For the first time, there was a wave of offense from the liberal front. Instead of silently listening to the other side, the liberals took to the streets in protest, organised vigils and wrote extensively and openly, conveying their feelings towards the killing. A liberal movement was born.

A society where reasoning doesn’t have a role to play is destined to cripple with time. To bring about a true rightist revolution, popularity is essential. For instance, Turkey was transformed into a secular state from a conservative one by Kemal Ataturk. The transition was successful back then, but the conservative parties are on the rise once again. The only difference is that Ankara has grown ideologically and has learned to shape itself through reasoning and dialogue. The rightist leadership is trying to squeeze Ataturk’s secular legacy through the parliament instead of the guns. Clearly, the strategy is more successful. The movement by Turkey’s ruling Islamist-rooted party is such that even the Turkish army, considered the guardian of Ataturk’s legacy, is unable to control it.

A movement from the liberals was inevitable – all it needed was fuel. The volcano erupted with the assassination and the cornered liberals were pushed off the edge.