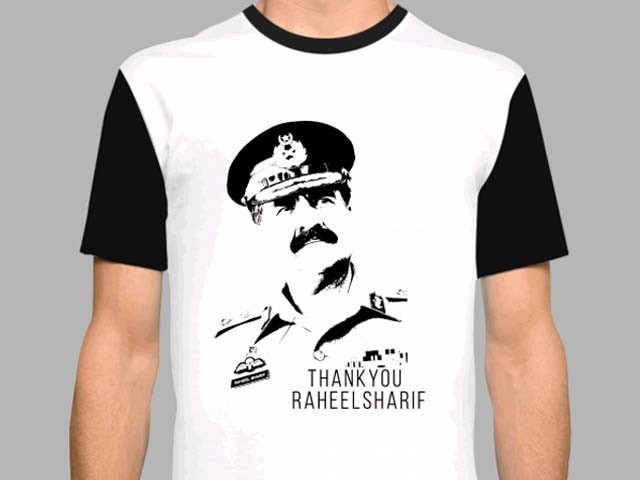 There are now T-shirts out there with that man Raheel’s picture on them. God, this is too much! I am the PM not he! PHOTO: THE WAREHOUSE

I have a serious complaint to make. You must know… but of course you do… that there are now T-shirts out there with that man Raheel’s picture on them.

God, this is too much!

Why have you allowed this to happen??

Please God, remember that I am still weak although I don’t look it, because I have just had a very big operation and although many people don’t believe it (they say I went to my London apartment in Mayfair… how delicious that sounds… just to hide when that stupid Panama information leaked out but you know I didn’t, it was just lucky timing), if anyone needs proof, I can show them where they cut my chest open and did things to my heart like how it was done before Shab-e-Mairaj, and no I’m not trying to go that route, I leave that to Mr Improper Khan, and to that Tahirul Dharni who is back again, and that quack na- Liaquat.

Look, I try as hard as that Raheel man but I can’t help it if I don’t have a smart uniform and if my public image creating bunch is not as good as his ISPR… but T-shirts! What about me, God, where’s my T-shirt? That’s my electorate out there that will be wearing his shirt! We made all those trains and roads and bridges and I just said goodbye to the IMF so impressively.

Did nobody read or hear what IMF’s Harald Thumb, sorry Finger, said about Pakistan’s economy doing well? Finger said (really, these goras have the strangest names) he was satisfied, that we have lots of construction activity and a good private sector credit growth, and more investment because of the Chinese corridor. I want to mention other good things he said too, but the bijli has just gone so I can’t read this list. I will read it and tell you when I get home because the bijli never goes in my house, and in Shahbaz’s house, and the houses of my colleagues and friends. But of course you know all that, God. You know everything.

See what we have to deal with?

If I was like that Raheel man and his colleagues, I would settle everything with a gun but we don’t settle things that way, we settle for not settling them at all. Anyway, why use guns when you can use money? And cunnactions?

Guns are so passé. Ha. I learnt that word from Tehmina. Maybe she used it in one of her books. They say her last one about silly things in sorrow times or something like that was awful, so maybe one of her other books? Anyway, she told me that word and I memorised it. Passé. I like that word. It means ‘purani baat’(old news).

Like Zardari sahib, yaar woh passé ho gaye hain (Man he’s become so passé). Hehe. Or like recently when someone asked me about the Panama foolishness as I stood at the podium, I waved my hand (which has dimples on the knuckles, seriously, they’re so cute) and said carelessly: That’s so passé.

Let’s talk about the PCEC instead, the Pak-Chinese corridor thing, one of my many achievements.

That was so definitive, and I tried dropping the mike after that like Obama did but my bodyguard, who’s always trying to get on camera, caught it before it hit the floor, the idiot.

And now August 14th is coming up and I have a speech to deliver, a nice one that begins with ‘meray aziz hum watnon,’ (my fellow citizens) but I have to think of what to say after that. I can’t talk much about Kashmir except promise a resolution and say Kashmir will come to Pakistan, whoop, whoop, although really they don’t want to be part of Pakistan (don’t say ‘who would?’) as much as they don’t want to be part of India. Also now that Singh fellow and our Chaudhry had those words at the SAARC meeting and Singh stormed out. If he’d stayed and tried some of our biryani he would have said,

‘Take Kashmir, just give me this recipe’, but he left without having lunch.

There’s all these factories closing down because they don’t have enough cunnactions (bijli wallay) so I can’t talk about industries, and if I say anything about the militants and terrorists someone or the other will get upset and there will be dishoom dishoom (bang bang) and I don’t mean the movie. Really I would just like to say,

‘Meray aziz hum watnon, I WANT A T-SHIRT TOO!’

After all I’m just as pretty as that Raheel man is, more than he is, I have dimples, and not just on my knuckles I also have a big one on my chin, he has none, although he may have some but not where we can see them. As for mine, my mother used to do meray dimple ka sadqa and distribute nihari all over the muhallah; I wonder what his mother did? But Shahbaz tells me I can’t say that either. Boo. Really, it looks to me as if now I can’t do or say half the things I used to be able to, I keep falling over that Raheel man. You’d think he was ruling the country not I, hain ji?

Oh well. There’s still time to think about my speech. After all, life is so unexpected. Who could have said just a few days ago for example that a plain old Pakistani would make such a difference to the American elections lead up as that Khizr Khan and his wife? I mean other than anything else, that Trump knows very little if he thinks us Pakistanis don’t allow our women to speak. Lo ji! No one can get that Asma Jehangir to shut up, although recently she did say that the,

‘Panama Papers leak should not be used to introduce a ‘parallel system’ in the country,’ a useful thing to say, if only she had not added that she was one of my fiercest critics.

She needn’t have said that. And then there’s my daughter who talks incessantly in tweets as women should; and that Mazari lady who’s no Tweety bird but she can talk too.

So, God, please get me a T-shirt too, meray dimple ki qasam, and please also tell me what to say in my Independence Day speech. Should I mention that the army is getting too up itself, but that no one understands why that should just not happen, that really it comes under my government’s command and not the other way around? Shahbaz says I shouldn’t and I want to win the election, almost as much as I want that T-shirt.

So thank you, God, I’ll wait for your advice. 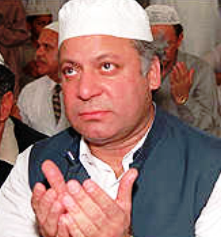 Note: This piece is a work of satire.