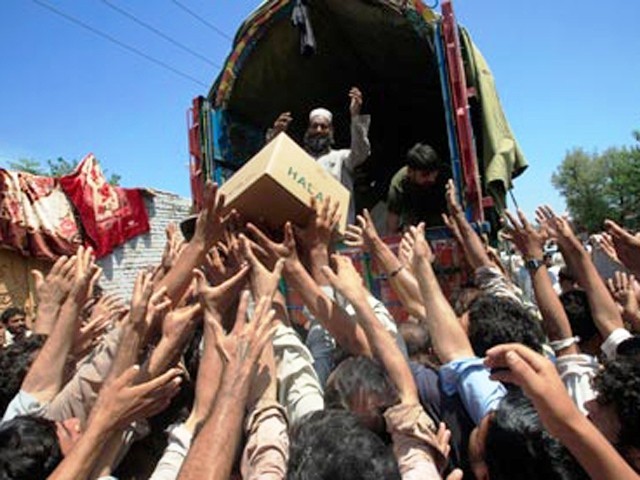 What will happen if the majority is faced with starvation? Is a blood-soaked revolution around the corner?

On a recent visit to a market in Gilgit, I witnessed two men beating up a vendor. When I inquired about the cause of the fight, I was told it was a result of bitter haggling over the price of a jacket.

The two men had offered Rs100 for a jacket while the vendor insisted that he couldn’t give it for less than Rs230. The mere difference of Rs130 triggered a verbal debate, which then culminated in violence.

While many may find this shocking, I thought the incident wasn’t unusual. We have come across similar cases of a much more serious nature, and have remained quiet.

I remember the incident in Karachi when a mob set on fire thieves who were caught red-handed. And who can forget the time when the two brothers were lynched as a crowd watched silently – an incident that shook the entire country.

However, the background of this particular incident that I had witnessed can be linked to our country’s economic crisis, for which I hold the government directly responsible.

As the ‘drama’ continued, the promises of the leaders of Pakistan Peoples Party flashed across my mind. “Roti, kapra and makaan” was the slogan that wooed people to vote the party to power.

Unfortunately, today the masses are on a fast track of losing the little ‘Roti, kapra and makaan’ that they actually possessed one after the other as the price hike remains constant.

The ‘gift’ the masses received on the New Year was a price ‘bomb’ that would have undoubtedly multiplied poverty if it had not been withdrawn. The poor are now unable to purchase used clothes even; ‘roti, kapra and makaan’ now sound like luxuries that only a small number of people will be able enjoy.

While standing as a spectator in the market, I realised that negotiations and bargaining don’t seem to be the main concern anymore as starvation has eroded our conscience.

So, the question arises, what will happen if the majority is faced with starvation? Is a blood-soaked revolution around the corner?