Why has non-violent India become so violent? 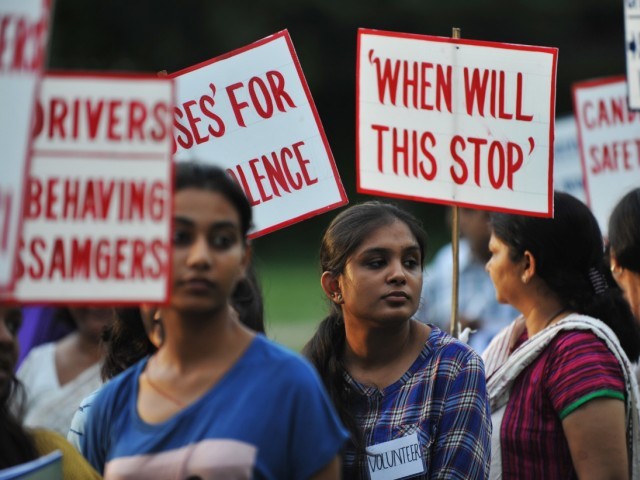 Indian activists protest against violence and crimes against women in Siliguri. PHOTO: AFP

India carries somewhat of a reputation globally as the home of spirituality and a champion of non-violence. The combined legacies of Emperor Ashoka, Gautam Buddha, Mahatma Gandhi, and many other renowned gurus and sages have left an imprint on the way India seeks to carry itself on the world stage and also to an extent how the rest of the world perceives it.

Many seekers of wisdom and inner peace make their way to India, hoping to find a path to spirituality and enlightenment. Some succeed in finding what they were looking for, while others return with disappointment, disillusionment, and often a severe Delhi belly.

On the diplomatic front, India has traditionally espoused non-violence. At the United Nations, India most often advocates the use of peaceful means to solve disputes around the world. The country has not initiated any wars, even in a tense neighbourhood and in the face of some serious provocation. Historically, it has hardly ever sought to invade other territories in order to expand outwards. In fact, India has borne the brunt of massive invasions throughout the course of history. Many argue that this pacifist mindset allowed invaders to conquer it with extreme brutality and firmly establish themselves within its borders.

Even India’s road to independence from colonial rule was paved with the asphalt of non-violence. Sure there were elements that fought the might of the British Empire with fire, it was ultimately the peaceful mass movements like non-cooperation, Satyagraha, and civil disobedience that captured the world’s attention. Of course, Britain’s post-war decline contributed to its inability to hold on to its colonial possessions, but the headlines and history books will always cite the non-violent rebellion as a landmark.

Under this overarching image of peace and an aversion to violent ways, lies the contradiction of rampant everyday violence within society. One would expect a country that has given the world “ahimsa” and yoga to also be at peace with itself. Unfortunately that is not always the case.

While post-partition India has largely escaped mass slaughters, ethnic violence, or random violent crime of the scale seen in many other parts of the world, it still grapples with crime, insurgencies and communal unrest on an ongoing basis. These are undoubtedly serious issues for the country and need to be tackled at multiple levels, using multiple levers and are therefore not the dimension of violence that we seek to explore today.

The focus is on the high degree of low intensity inter-personal violence experienced in Indian society. So while internationally India talks and acts peace, it is ironic that its citizens often do not extend each other the same courtesy. The use of violence to resolve an issue is never too distant from most spheres of everyday life.

A great example of this is witnessed on India’s roads. An accident is not followed by the involved parties sharing insurance information and getting in touch the cops. Both sides alight from their respective vehicles and start yelling at each other, and often this verbal altercation turns into a full-fledged brawl to settle the issue. Might, or the perception of it, eventually decides which party wins damages.

It’s not just accidents that result in physical confrontation. Not yielding to the other driver, overtaking someone, or even giving an admonishing glance to an erring driver can result in some serious fighting.

Violence is also used commonly to settle differences. Fights often break out between patrons at roadside dhabas. Neighbours often quarrel and even fight over the volume of music played during social functions. Land disputes and business disagreements often end up in a vicious cycle of violence. Consenting couples, getting cozy in public places are beaten up by the self appointed guardians of morality.

Political protests often turn violent with severe damage to public property. Buses are burnt and buildings are vandalised, often at the slightest provocation. If a bus driver hits a pedestrian, no one waits to see what punishment the law will give him. He will be dragged out and given a major thrashing. When justice is perceived as uncertain, the mob mentality takes over and justice is meted out by the mob, on the spot.

Women and children, the most vulnerable sections of society, are often at the receiving end. In a society where might is right, the male child will always be preferred, at the cost of the female child, and this results in the further distortion of the socio-economic environment.

Salman Khurshid, India’s ex-Foreign Minister spoke strongly about maintaining peace at any cost across the borders, even in the face of provocation, during his tenure. However, the same gentleman had no hesitation in threatening his critics with serious consequences if they dared to set foot in his constituency.

All in all, the recourse to violence in everyday personal life is all too pervasive in India and the long-standing culture of “ahimsa” seems to have been ignored by its people. Why has this happened? There are three broad reasons for this.

Pressures and hardship in the struggle for daily survival

Life in India is not easy for the common man. Resources are scarce and everyday there is a struggle to get the basics. One has to contend with lines for filling water, power outages, crowded public transportation, broken infrastructure and inadequate public services. Employment opportunities are still limited, and one is constantly under pressure to compete.

In the face of all this adversity, it is very easy to loose one’s cool and explode with violent fury to let out one’s frustrations at the smallest pretext. It is easy to follow “dharma” or “ahimsa” in sprawling ashrams, serene mountains, the broad avenues of South Block in Lutyens’ Delhi, or even the abundant landscapes of Scandinavia, but harder to adhere to them in the pressure cooker of the daily challenges of life in India.

Lack of faith in the system

In India, the system often does not work. You can stand in line for hours, but at the end there is no surety that you will get the service you had lined up for, be it seats on a bus or getting to talk to a government clerk, or even crossing a traffic light in an orderly fashion. In such an environment, everybody is constantly on edge and jockeying for the slightest advantage, which leads to confrontation and conflict.

No fear of consequences

The delivery of justice in India is very tenuous. Inefficient policing combined with an over-burdened judiciary makes it easy for people to take matters in their own hands and get away with it. The writ of the state is absent in large swathes of the country and that makes it very easy for someone who has some semblance of strength, to impose their will on a weaker adversary. The state is unable or unwilling to exercise its power to protect, and bullies can go about bullying with impunity and not worry about getting arrested or punished.

India must address all these factors to ensure that it preserves its beautiful tradition of spirituality and ahimsa and enables its people to walk on the peaceful path towards enlightenment, prosperity, and progress.