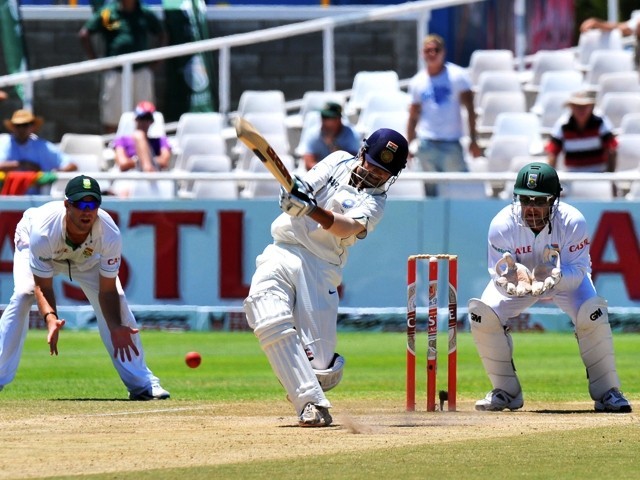 Had either of the captains acted aggressively in the third match, a result would have been a possibility. PHOTO: AFP

If India had won, lost or even drawn the series there would have been no change in the ICC Test Ranking. It would remain on top and South Africa would be number two.

However, since India has never won a series in Australia, England or South Africa, the team could not truly call itself the ‘best Test side’ in the world. Hence, this series in South Africa was the unofficial Test Championship for the best test side.

The series lived up to the expectations with some exhilarating cricket being played by both sides. It will be remembered for Sachin Tendulkar scoring his 50th Test century the most, while there were other milestones achieved as well. Almost 15 years after he began his test career, Jaque Kallis scored his first double century in Test cricket and also became the second person on the list of most Test centuries scored, after Tendulkar. He will most likely remain there as the next man in line, Ricky Ponting, probably played his last test at Melbourne Cricket Ground two weeks ago. There were also some great spells of bowling especially by the South African duo of Dale Steyn and Morne Morkel.

The first Test match of the series ended as predicted. Taking advantage of the lively pitch, Steyn and Morkel blew away the much hyped Indian batting lineup to set up a big win for South Africa.

In the second test, India returned the favor. With Zaheer Khan returning to lead the attack, the South African batting line up suffered this time to leave the series tied one all with one match to play.

The third match swung from one side to another but a monumental effort by an injured Kallis on the fourth day left India to make almost 340 runs on the last day. All four results were a possibility but in the end it was a draw. India went at a snail’s pace to score just 166 runs but lost only three wickets to ensure a draw and hence ended the series leveled.

This can be treated as an achievement for India for on all their previous trips they have always lost. Meanwhile, South Africa’s wretched run at home continued. They have not won a Test series at home for more than two years now.

Had either of the captains acted aggressively in the third match, a result would have been a possibility. But both the captains opted for defense-first as an approach. This is something that has crept into the modern captain. Although this decade started with the Australian juggernauts setting a clear agenda for Test cricket with an aggressive approach and willingness to risk losing while going for the win, but after the giant fell due to the retirement of some key players, no other team has opted for this approach and hence we end up with more drawn Tests.

This series ended up in a stalemate and we still do not have a clear number one team in the world.