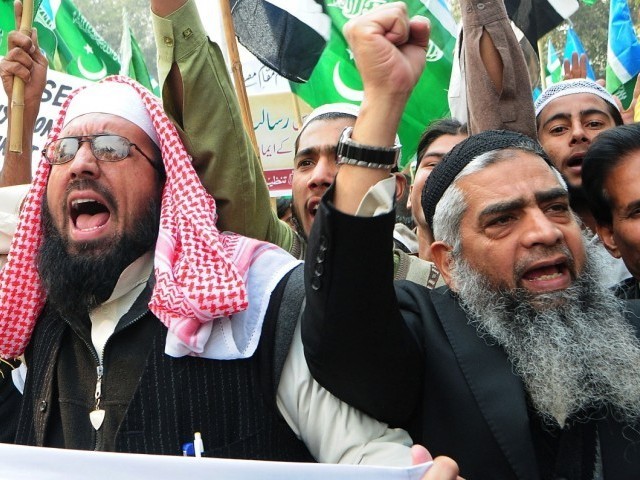 How different is Qadri from a suicide bomber who murders innocent bystanders by blowing himself up?

Governor Salmaan Taseer’s murder at the hands of his own bodyguard has certainly rocked the proverbial Pakistani boat. Just four days into a new year – which the astrologers on the television told us would be a good one for Pakistan – a police guard turned his gun on the governor, riddling him with 26 bullets. The assassin was led away, smiling ear to ear at his accomplishment and leaving a trail of utter madness in his wake.

Pakistan has had its share of turbulent times, and through the years we’ve found surprising ways of coping with them. We deny involvement, blame ‘invisible hands’ and eventually move on to the next news story that’s breaks on TV with unfortunate animations and impudent musical scores.

The situation this time has resulted in a divide between ultra-religious hardliners and the self-proclaimed modern and free-thinking public. With large and influential religious groups condoning and even applauding the assassin for his deed, the shocked and confused free-thinking public is left questioning their notions of right and wrong.

The thing to be worried about, of course, is the implication of this assassination. An argument can certainly be made that simply speaking against a harsh sentence imposed by the Constitution (under section 295-C) does not make one wajibul qatl. Even the Sahaba were known to disagree with Prophet Muhammad (pbuh) at times without being declared so. Would they, too, be murdered today for having separate opinions? Besides, the laws we are talking about here are certainly man-made, with no basis in the Holy Quran or Sunnah.

The point of this writing, however, is to call attention to the implications of vigilante action. Praise is being heaped upon the assassin for gunning down the governor, and the justification for murder is that what Qadri did was congruent with the public sentiment. In the eyes of many, what Mr Taseer did -question the validity of a man-made law – was a greater evil than what the assassin did – murder.

The question, therefore, is this: Does public sentiment outweigh Islamic and constitutional law as well as basic human rights? Can we justify murder, or rather any action, because the public ‘wanted it?’ Why is homosexuality looked down upon then? Or prostitution? The public, or at least a majority, clearly wants it – if we can justify murder in this way, why not these? Where is the line drawn?

How different is Qadri from a suicide bomber, then, who murders innocent bystanders by blowing himself up? But Salmaan Taseer was not innocent, you say. Then perhaps the suicide bombings in Israel or the satanic West are justifiable, because they too are ‘enemies of Islam’ simply because we say so. What about suicide bombings in Karachi or Peshawar? Where does our passive acceptance and meek justification of mass murder end?

We, that call ourselves lovers of peace and preachers of a religion as pristine as Islam, are nothing but a crowd of disorderly bigots who find no greater joy than in finding fault with others. After all, if a crowd can beat two kids to death and get away with it, certainly a righteous protector of Islam can murder a wayward governor. Am I right?

A business student, freelance writer and web developer who's also Research Director for AIESEC in Karachi and Vice President of the Rotaract Club of IoBM.