Does the National Action Plan not apply to Pakistani Ahmadis? 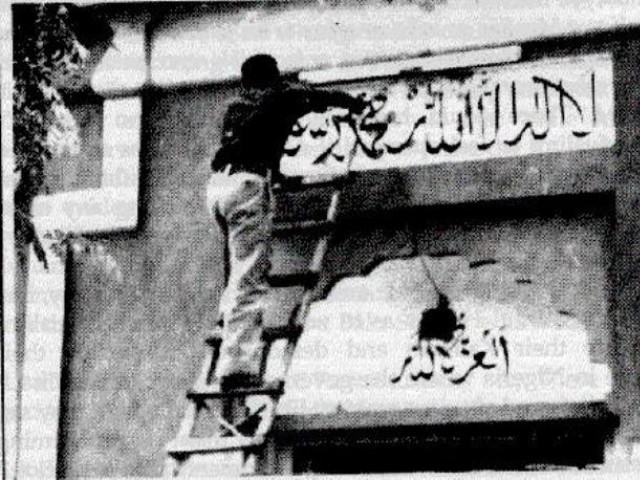 The Shahada being erased from an Ahmadi place of worship by Pakistani police. PHOTO: WIKIPEDIA

A recent report by the Hudson Institute paints a damning portrait of Pakistan as a country where its Ahmadi community is arrested for propagating their faith, has its places of worship destroyed over allegations of blasphemy, has its businesses and products boycotted, and its deceased’s’ graves desecrated with impunity.

This is a Pakistan where police officers are frequently complicit to violence against Ahmadis, the school curriculum panders to prejudice, and it feels like every few weeks new names are added to the list of Ahmadis murdered at the hands of misguided psychopaths who are brainwashed and influenced by Pakistan’s irresponsible, vast and well-oiled media machinery.

The media – electronic and print – has long been complicit in the criminalisation and the erasure of the Ahmadi community. Even though Pakistan has its share of liberal and mainstream media, which sometimes breaks its silence and editorialises against the injustices faced by Ahmadis, it is the Urdu-language media that dominates and reaches the critical masses of Pakistan.

A simple Google search of editorial archives comparing the vernacular English media with Urdu publications confirms what most of us have accepted as fact: Urdu media leads, in leaps and bounds, when it comes to slandering the Ahmadi population and broadcasting the false propaganda which often is the motivation for violence.

For instance, an op-ed in a leading Urdu daily reads,

The piece concludes with a call to arms noting that,

Another popular Urdu publication leads with a bold and provocative headline that alleges:

“Qadianis have conspired to break up Pakistan through support of anti-Islam movements”.

And, as of last week, Urdu media has conquered another unfortunate first with the printing of anti-Ahmadi adverts calling for charitable donations to assist in the mission to eradicate the Ahmadi population.

Broadcast media is no less evil.

Over the years comments by televangelists like Aamir Liaquat have led to supporters blindly following their favourite commentators. The result is violence, and the murder of Ahmadis in the name of Islam, jihad, and some other deluded reasons conjured up by deluded minds to justify the taking of an innocent human life.

What is striking is that we have no shortage of prima facie and empirical evidence to confirm that Pakistani media has created a hell-on-earth atmosphere for the country’s four million Ahmadis. Today’s Pakistan is no better or worse than the Pakistan of the 50s when riots first surged against Ahmadis, or the Pakistan of the 70s when we amended the constitution in a most deplorable way completely eradicating any chances of peaceful coexistence.

In today’s Pakistan, the media is complicit in all attacks against Ahmadis – attacks that range from low-level assaults and name-calling to the more sinister death threats and coldblooded murder. Assaults that the media has not only encouraged but, in a most macabre fashion, has made eerily palatable and acceptable for mass consumption.

As all my fellow journalists will attest to, the only currency our profession accepts is that of unbiased objectivity. And as journalists, we see daily the way in which human nature is hard-wired to respond to negativity more than positivity. In fact, research indicates that it takes approximately five positive impressions to overcome one negative one. Because the media fraternity has immense amounts of power to control, build, or dismantle impressions and stereotypes, it is not only an ethical obligation but also a professional one that we journalists steer clear of the pejorative, and emotionally loaded labels that only serve to stir up the easily frenzied and mouldable masses.

Anti-Ahmadi editorials and adverts such as the one that appeared last week in a local newspaper tarnishes the reputation of and strips away the credibility that is inherent to a media organisation whose very purpose is to empower, represent, and fairly report on populations in their communities.

It wasn’t too long ago when the American press would run lost and found ads for runaway slaves. Malcolm X was one of the few to have spoken out against the dire consequences for both the psyches and lived experiences of black people who were targeted and turned into scapegoats by the mainstream media during those times.

“This is the press, an irresponsible press,” said Malcolm X.

The overburdened and marginalised Ahmadis of Pakistan are left to pick up the pieces in the wake of brutality and neglect by media folk – specifically, the media folk who recklessly enjoy positions of power, trust and influence.

What is especially striking is the nonchalance of the Press Council of Pakistan (PCP) to take action. It leaves one confused as to why we ever bother to make policy and law in the first place. Take the National Action Plan (NAP) as an example. Even though it was recently enacted specifically to criminalise the proliferation of hate material, there are yet to be criminal charges against anyone running a publication peddling anti-Ahmadi hate.

In the 1970s psychologists developed a series of experiments to demonstrate how emphasising differences between groups leads to mistrust and hostility. One study even found that wearing different coloured shirts was enough for groups to begin displaying signs of mistrust.

In other words, the constant assault on Ahmadis in the mainstream media has conditioned and primed mainstream Pakistani society to know only fear of the ‘other’.

Today, Pakistan is burdened with religious prejudice. By and large, we are a country comprised of a mostly misinformed, poorly educated citizenry that loves to out-Muslims one after another.

While not exactly an earth-shattering revelation, nonetheless, this should chill any God-fearing Pakistani to the bone. It should also offend the conscience of every Pakistani.

The fight for your Ahmadi neighbour’s right to life, liberty and security is nothing short of a fight for justice for any and all other Pakistani citizens.

Indeed, it is inseparable from the struggle for democracy itself.