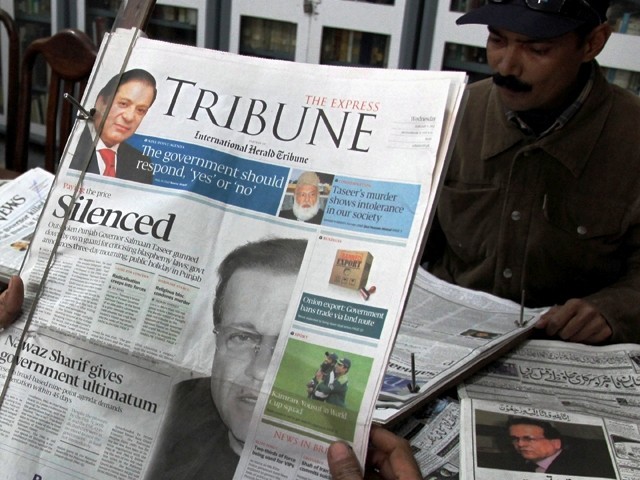 Bloggers and readers of The Express Tribune express their views. PHOTO: EPA

Governor Punjab Salmaan Taseer was assasinated by his own guard, a member of the Elite Force, on January 4, 2011 in Islamabad.

The assassin, Malik Mumtaz Qadri surrendered himself after shooting the governor with 26 bullets. Qadri said that he killed Taseer because the PPP leader had termed the blasphemy law a kaala kanoon (black law) and supported Aasia Bibi, a Christian woman sentenced to death under the law.

The Express Tribune was inundated with a flood of outrage and grief from bloggers and readers.

Welcome to ‘Pakillistan,’ where we kill indiscriminately, anywhere, any place, any time, any way, when it comes to dissent. We kill people as it is a divine duty of ours.  We are the solely guided and only righteous Muslims that the Almighty ever created on this planet. We profess that we are the true Muslimeen. We don’t care that the Almighty calls Himself, Al Rehman and Al Raheem. We do not have the words compassion or mercy in our dictionary.

I felt sad because a human life was lost, a life that was doing something to create tolerance and the change Pakistan desperately needs. In this country very rarely do you come across politicians who fearlessly stand up for something they strongly believe in and put their own lives at risk.  And to think we don’t value such people – shame on us! Sad also, because I felt deeply for the governor’s family – losing someone suddenly and brutally changes you forever.

The 26 bullets received by the governor fired from the gun of his 26-year-old Elite Force guard Mumtaz Qadri were not controlled by foreign conspirators – they seldom are. It’s not the Taliban, al Qaeda or CIA harming our social fabric. It’s the clogged-psyche mullahs ruling over the minds of susceptible semi-literates. The copious pseudo-religious SMSs and the slum mosque mullahs’ free to air sermons taking over naïve minds are all home-made venoms inciting such acts in the name of ‘rescuing Islam.’

The cleric has become a defining force in our society and no one is allowed to question his credentials or his personal basis for assessment. With the backing of God, there word is fast becoming an unchallengeable aspect in our society. Without an educational base to filter out the extremist ideology and thought there is a growing acceptance to extremism and radical thought.

As a Pakistani, belonging to a democratic system, it is our right to voice our opinions and have our voices heard. I believe in freedom of speech, and I respect the courage of someone speaking up for what they believe in. I am at the same time realistic and agree that we are very far from reaching such a utopian democratic state.

Salmaan Taseer’s assassination is a major turning point for the Islamic world and the fact that many elements within it are possibly pleased by his death, is shameful. The manner in which he died reminds us of Indira Gandhi’s untimely assassination. However, the only difference here is that Indira Gandhi was launching a bigoted attack on the Sikh religion but Mr Taseer was only trying to protect the civil liberties of those from a religion other than his own.

The history of Pakistan is replete with contradictions. Not onlyshould Ziaul Haq  be held responsible for introducing these black laws, but the successors of the Quaid-i-Azam are to be blamed for sowing the seeds of hatred, discrimination and destruction. We are reaping, what was sown more than half a century ago. The adoption of the Objective Resolution by the Constituent Assembly in 1949 was the first step towards medievalism. It took away the rights of minorities to be equal citizens of Pakistan like Muslims.

That the killer was somehow ‘motivated’ by his love for the Holy Prophet (pbuh) in committing this murder leaves one’s head hanging in shame and disgust. The people of Pakistan need to be woken up from the state of mass psychosis that afflicts the land of the pure. Where are the religious scholars who will explain to the assassin that it was a lie that he was living?

Some conspiracy theorists claim this to be a move by the government itself, to avert the forthcoming political situation, after an aggressive break up with its coalition partners. If there is any truth to such theories, the assassin, Malik Mumtaz Qadri, might very well have been used as a pawn. The government must prove these speculations wrong by trying Qadri in a transparent manner.

Although I completely disagree with the victim’s approach towards the blasphemy laws, I condemn the governor’s assassination. If every person has the right to pass and carryout a judgement, why do we have courts, judges or even laws to begin with? The irony of the situation is that you are trying to be a supporter of a religion by doing exactly what’s disliked in the very religion.