The eternal night in the valley of light 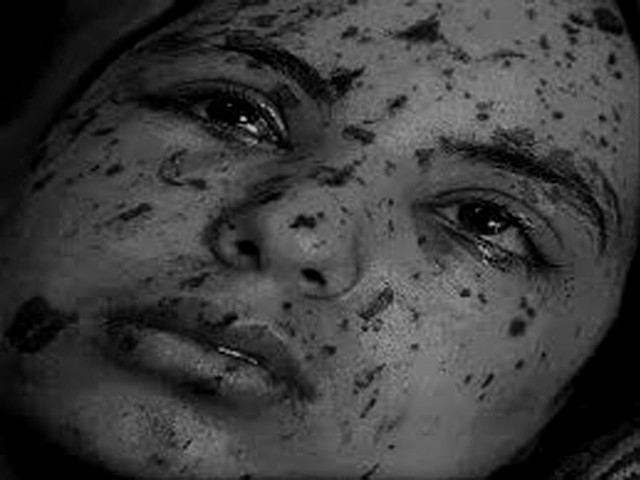 Sometimes I would wake up in the middle of the night and could feel someone standing in the corner of my room. I was afraid of opening my eyes to find a Djinn or Khokh standing right there, staring at me, blankly. Eyes closed, I would crawl my hands on the wall, looking for the switch and turn the light on. I would then carefully scan all the corners of the room to make sure no one was around, staring at me through the darkness.

But now things have changed.

Sometimes – and that is very frequent now – I wake up in the middle of the night and can feel someone standing in the corner, hiding with a gun – a police man or an army man – and staring at me sternly. I do not open my eyes. I don’t want to open them.

I can’t open my eyes.

My eye-lids get strained, wishing to be let open but I am afraid of unravelling the gashed eye that can see no more. I don’t crawl my hands on the wall to switch the light on, for I know that that can’t chase my fears away. I try hard to drift back into a deep sleep but, instead, I find myself falling into a dark bottomless pit every time. Now, that man with a gun never leaves that corner in my fears. Maybe he really stands there.

I miss the fluffy teddy bear I bought for myself on Eid. I miss it not because I have lost it, but because its pink colour reminded me of cotton candy. Now I can’t recall what the colour pink looks like. I no longer wish for cotton-candy.

I was afraid of the darkness, always. Whenever I had to fetch something from another room in the evenings, my father or mother – whosoever was with me then – would call my name continuously to assure me that they were with me in the darkness. Their voices, acting as a light, chased my fears away. I would quickly switch on the light in the room, paying attention to the voice coming from another room from either of my parents, and quickly grab whatever they had asked for and run back to them, panting.

But then things changed.

They no longer send me to another room in the evening to fetch anything, or during the day for that matter. And lately, I have stopped discriminating between day and night. Not by choice though. You see, I have been robbed of that privilege. Now every time there is a silence around me, I feel myself trapped in that dark room, unsuccessfully struggling to find the switch. I feel the gun-wielding-man’s stare penetrating the darkness and choking me in my own fear, and in the absence of my parents’ calls that could light up the darkness, I howl in fear. Then, abruptly, my mother holds me tight and assures me of her presence. Her voice is the only light in my life now.

Everything has changed now.

My room is the first one to welcome the rising sun. The sun’s first rays coyly make their way through the window panes, piercing my eye-lids, gently warming them. Normally, that would wake me up. I would not open my eyes all at once, no. I would squint first, then close them again and finally welcome the morning sunshine, in all its glory, into my eyes. My mother would tell me that I would be a king one day, for I always welcomed the first rays of the sun. Those beams of the sun were a hope, a prophecy, an omen and a promise.

I wake up, now, not really conscious of what time it is. There is no sunshine piercing through my eyes, gently indicating the start of the day. The meaning of time is completely lost in my life now. The only hint I have of the day or night is that complete silence means night and hustle-bustle means day. But of late, the silence does not end. It is as if I am only awake during the night. And when I wake up in complete silence, absorbed in fear and darkness, I pray within my heart that it is day so that the corners of my room are not occupied.

There are still some days in which I can feel the warmth of the sunlight on my skin – I can hear the birds chirping outside my window – making me long to open my eyes and see the sunlight bringing everything to life in my room: my toys on the shelf, my photo-frame when I was six, another photo-frame where my mother holds me in her lap in the kitchen of our old home, my fluffy teddy bear, the remote controlled car, my chair and table, the notepad I have hidden in the drawer, scribbles on it that no one but I understand, and the mirror that embraces all the word in itself.

I can see nothing now, except the darkness. The first ray of sunshine no longer means light to me, it means a lost hope, an unfulfilled promise, and the symbol of a king who lost his battle.

This short story is in light of the atrocities being committed in Kashmir. It is a tribute to Nasir, the five-year-old Kashmiri boy who was blinded in the left eye when Indian forces inserted a needle and filled his eyes with sand. He was waiting for his father in an alley. But before his father could take him, Indian forces had already blinded his left eye.

It is a tribute to the over 185 people, mostly youth and children, whose eyes have been damaged by pellets that Indian forces use on the protesters to quell them. Dozens of those injured have lost their eye-sight completely or partially.

The author is a freelance Journalist and an aspiring short-story writer based in Kashmir. His stories have been published in BBC, The Caravan, Express Tribune, Tribune Labs, Kindle Magazine and few local publications. He tweets as @Qadri_Inzamam (twitter.com/Qadri_Inzamam)