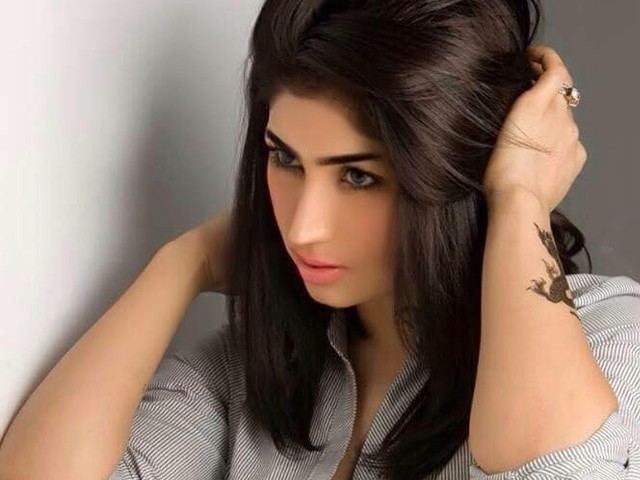 I am consistently asked why I am taking this issue so personally. This is personal. Qandeel’s death is an attack and an insult to all Pakistani women. PHOTO: FACEBOOK

They call her a prostitute, a sex object, a joke and other degrading insults in an attempt to discredit her. They assume that because they deem her to be all of the above, she cannot at the same time be empowering women and/or herself. A fatal flaw is, thus, exposed in their argument in that she is struck down for what women (and men) across the world celebrate her for: her courage, tenacity and fire to be whoever she chose to be in a society that (literally) stifles freedom—especially freedom of expression.

As I reflect upon this week, many voices leave me heavily conflicted. I cannot begin to comprehend one deafening view that has overpowered the narrative surrounding Qandeel Baloch’s death: misguided male privilege ruling freely on her “feminist” status.

An essential part of the feminist movement that most in Pakistan are unaware of and what Qandeel embodied is sex-positive feminism.

I call, you, males privileged because you are lucky to be born a man in Pakistan. You can walk around in markets in any attire you please, roam the streets without being touched and cat-called at, speak freely on social media platforms without fear of physical attack based on your body and appearance.

You do not recognise that these “small” freedoms are in fact privileges, as you have been born, entitled with them. Alas, the woman, the bearer of the entire male population’s (about 100 million people) honour: she must not speak too loudly, she must not dress too immodestly, she must act with care and due caution. She is a stranger to these freedoms—they are a luxury for her. It is a good day for a woman in Pakistan, if she can walk the streets without being touched or gawked at. Unfortunately, nearly all in Pakistan have forgotten to remember this basic disparity of freedoms plagues the nation.

You, men, are privileged because you can breathe, dress and walk freely but most importantly the entire nations’ honour does not rest upon your shoulders—you have shirked that onto us. Why must I carry this hefty burden without consent? Why is my entire life contingent upon your honour? My honour is my own, and you threaten it daily by reducing me to just a physical object. Your burden is not my weight to carry, nor was it Qandeel’s.

I wake up to men debating Qandeel’s feminist status rather than speaking out to say that she should not have been the bearer of her brother’s or for that matter their own honour (I am making the assumption that a large proportion of them have at least seen one of her videos). You compromised your own honour by following her pages, by mocking her existence.

Those who do not understand the feminist movement do not have the authority or right to decide whether or not Qandeel was a feminist. What her death has made very clear is that even the most educated in Pakistan have a very myopic understanding of feminism.

The feminist movement is not limited to women protesting on streets with placards, fighting to alleviate the plight of other oppressed women. To shed some light on one aspect of the movement, sex-positive feminism centres on the idea that sexual freedom is an essential component of a woman’s freedom. In this vein, Qandeel was a feminist in her own right, expressing herself freely. The irony is that the very people that blamed her for being sexual take no issue in trading her sexual videos, essentially sexualising her in their own contexts.

On a broader level, if socially or culturally understood, the feminist movement seeks to eradicate the treatment that affords discrimination to the “female” gender binary. The social meaning of gender, according to one school of thought is created by the sexual objectification of women, whereby women are viewed and treated as objects for satisfying men’s desires. Society, thus, creates a hierarchy where women are dominated through gender (which is, undoubtedly, the case in Pakistan). And who can argue that Qandeel was not attacked based on her gender, based on her curves, based on her lips and her body?

Many have said she deserved the attacks for putting up seductive pictures on social media in a country where she should have known the outcome, but I fail to understand how we have absorbed the role of god’s moral police, to judge her actions. Whatever her motivations were, (assuming you do not understand the true aims of the feminist movement) can any of us truly deny that a village girl, posting as she did, putting a maulvi to shame on social media, was extremely brave and daring? It takes courage to, in the face of such a bigoted, biased and hating population, act as you please. And she did—she defied the norm.

I am consistently asked why I am taking this issue so personally. This is personal. Qandeel’s death is an attack and an insult to all Pakistani women. Whatever the status quo or culture may be, why should we be too afraid to express ourselves? No matter how outrageous the entire male population thinks our expression is (deconstruct my expression logically). Do not reduce me to my body, my motivations or my honour. Those are my own. Do not mock me in my death. And do not, place your honour on my shoulders—I don’t want it. 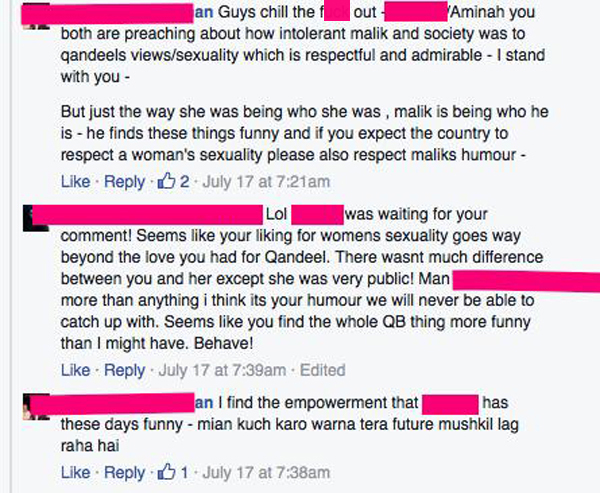