The ‘revolutions’ of PML-N and MQM 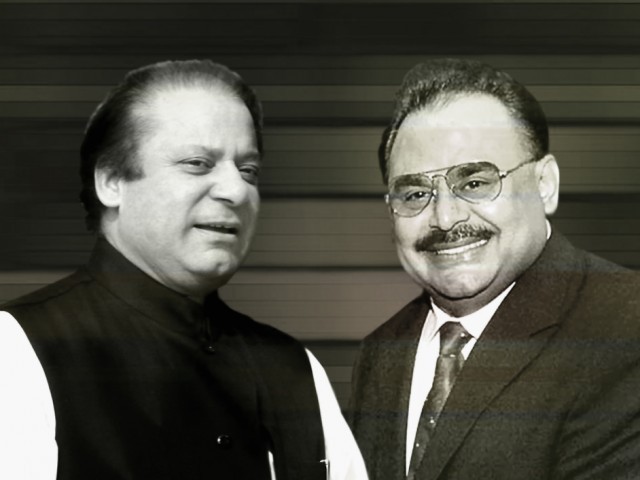 Both parties have the perfect formula to continue the status quo and make absolutely no changes to the political system.

You know your country’s politics is in the dumps when two of the most dictatorial political parties start talking about revolution and then start pointing fingers at each other.

I mean – seriously! The audacity with which the Muttahida Qaumi Movement (MQM) and the Pakistan Muslim League-Nawaz (PML-N) talk about revolution is simply amazing. And, it’s not as if they are small political parties. The PML-N prides itself as being a national party whereas the MQM is working its way up to becoming one or at least making claims of becoming one.

The fact is, the PML-N’s internal party structure revolves around one person and at best the way the political party is run can be called dynastic. The Sharif family treats the party as part of their business empire.

In comparison, the MQM has had the same leader for the last two decades and their executive committee has been more or less the same people who started out initially.

Now based on this, any neutral observer would know that both of these parties have the perfect formula to continue the status quo and make absolutely no changes to the political system. Given that, it is just wrong when these parties talk about launching a revolution.

My first question is how?

Given their party structures, that have remained the same for decades, how do these guys plan to start a revolution? Even if they did try starting one, wouldn’t that inherently include revamping their own party structures, to be more democratic and accountable? From where I stand, I think if they haven’t done anything like that within their parties for two decades, it’s highly unlikely they are going to do it anytime soon.

What exactly is this revolution?

Secondly, when these guys talk about the revolution, they can apparently bring about, what exactly is it? I mean they can talk about it all they want, but what is their definition of a revolution?

At any given point in time, has anyone of them spelled out exactly what their proposed revolution would include? As in what would be the road map of such a revolution and its contents?

Again, I haven’t heard or seen anything concrete from both sides in the last few months or even years.

So given that these guys have no plan and no road map for their rhetorical revolution, why are they repeating the same beat over and over again? Why do they keep assuming the people of Pakistan are dumb?

My only request to both of them would be to, continue doing whatever they wish to do as I honestly don’t care, but can they kindly stop using the word ‘revolution’ for perpetuating their own brand of bullshit?

Please understand that saying ‘revolution’ five times in a speech does not mean you are leading one. It just means that you like the word too much and are using it as a cover for your crap.

Finally, remember that even the Pakistan People’s Party (PPP) claims that they revolutionised the system, since they have been in power. And the revolution they claim to have brought about pretty much includes them being in power and staying there for as long as they can.

So, if that’s the revolution the MQM and the PML-N are talking about, then thanks but no thanks; we are already paying the price for the PPP revolution. But if they genuinely have a plan, then lay it on us. We will listen. But for the love of God, stop using the word ‘revolution’ in vain.