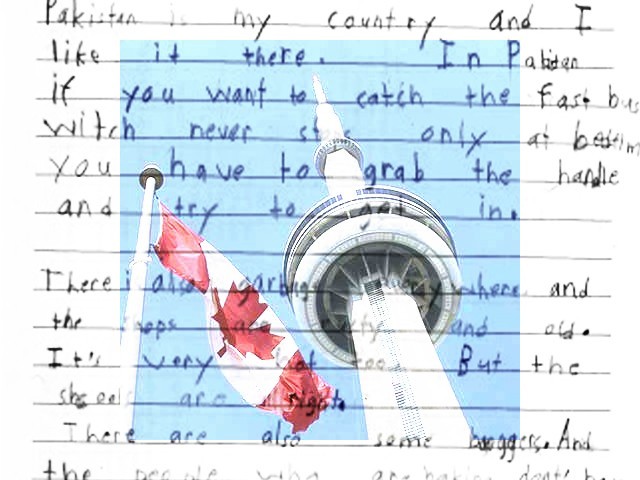 My child’s desire is a better Pakistan, and I failed to contribute anything towards this goal.

These words have been haunting me for the last couple of hours, written by an ostensibly vivacious six-year-old. They speak of the intense trauma that he is currently experiencing when relating to his homeland. A child’s innocence enables him/her to create impressions that perhaps lays bare the lines of fault and pretence which envelops our vastly deceptive lives.

Children often have the uncanny ability to see through the façades which we erect on impoverished realities of life, and since their hearts are yet to be tainted by the vices of this harsh world, their words reflect a painful but accurate portrayal of their emotions.

Such has been the thoughts of my son, who sat for his first grade Highest Level of Achievement Test (HLAT) at a local Edmonton Public School. The HLAT is an Edmonton Public Schools assessment given each year (from first grade to ninth grade) in order to measure a student’s growth in writing. His teacher asked them to write on a topic that was close to their heart and about which they knew a lot. My son, a new immigrant to Canada, chose the topic “Pakistan.”

It was an important day for him. He was a keen writer and I knew he would be able to pull off any topic that was thrown his way. But I had never considered the possibility that he may have to choose one of his own. The subject that he himself selected told me a great deal about how he already felt. But, it was the ending that left me (and all who read his writing) utterly speechless.

I wondered what was going through his little mind as he penned the end, how wistful he would have been comparing the two worlds that exist for him, and how his tiny heart would have wished for things to be better in Pakistan. It pained me to understand what his memories of his homeland had been and how he had been trying to figure out the stark contrasts between the place he loved and the place he was living in.

After the exam we walked through the lush green Edmonton neighbourhood. He raced ahead playing tag with fluttering butterflies. I felt a huge burden on my conscience. I ruefully glanced around and soaked in all the visible differences between the two worlds that I could, and contemplated whether Pakistan would, or could, become better.

The sheer negligence of our homeland by the hands of its own people has led to a volatile pessimism in our younger generation which is constantly rising in the absence of any concrete measures to nurture their passion and streamline it to fuel the country’s progress.

We, the people of Pakistan, display extreme narcissism that prevents us from being held accountable for our actions. This lack of accountability has hurt us the most. The rulers and ruled, both, share the blame, for our allegiance was never with the country but rather with our own selfish aspirations – the exceptions being a few handful. But the most heartrending repercussion of our deeds is the disillusionment in our children.

My child’s desire is a better Pakistan, and I failed to contribute anything towards this goal. Instead of believing in my country, I chose to give up on it when my child hasn’t. If he can go on clinging to a hope of good times, I should be the one to take up the task. Our inherent instinct to flee from challenges is what causes our problems to grow into incorrigible menaces. I had given up any idealism or hope for my country and ran away for my child’s future.

But, as it turned out, he was more Pakistani than me.

Today I felt ashamed of my stance. But, rather than shrugging it off nonchalantly, I have decided to embrace it and accept my failure. Tomorrow I will explain to him that Pakistan will become better only if we, the people, work with all our zeal. It will be better if you and me work for it selflessly.

As a mother, I would do all I can to make this wish come true – for we are because of Pakistan, and we will always be Pakistani. No matter where we might wander, our heart will remain there forever.

Nations do not turn around overnight and years of wrong cannot be undone quickly. It takes time and involves sacrifices but change always begins by changing your own heart. I hope as a nation of very egoistic individuals we embrace that first step and change ourselves – the rest will follow.

The author resides in Canada and is passionate about writing.

Why are our children brain washed to become “followers” instead of “thinkers”?

I am Pakistani, just like you. Except we’re not the same

I learned true parenting from a foster mother