Cricket: Most memorable moments of 2010 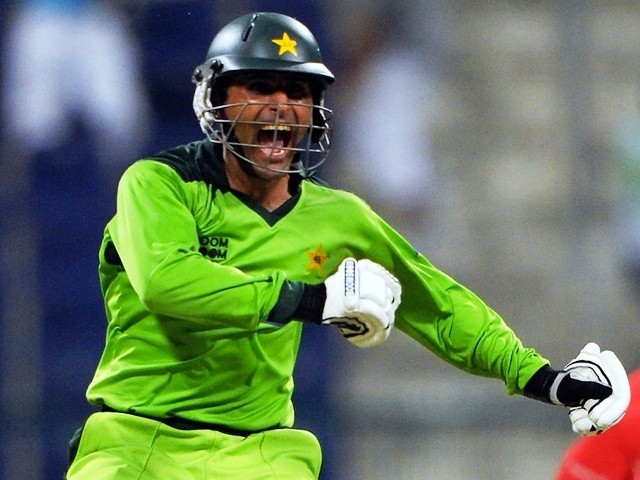 The way Razzaq single handedly took the game away from South Africa was quite unbelievable.

When you think of a year gone by, one surely thinks of the good, the bad, and the ugly. And, for a Pakistan cricket fan there were plenty of ugly cricket moments during 2010, which many have claimed has been the worst year ever in Pakistan cricket.

For now, let’s forget about the bad and the ugly, and let’s just concentrate on the good. The good that we have witnessed on the cricket field.

There have been plenty of moments to cherish in the year gone by, and here are my personal Top 10 performances from 2010.

Pakistan has never been short of quality pacers and they have always been known for the young fast bowlers they unleash on the world. This one though was an exception. At 32, no one really expected what Tanvir Ahmed showcased on his test debut against South Africa in Abu Dhabi. Six wickets in an innings is a significant achievement; on a dead wicket it’s an even bigger one. But to achieve that on debut, including wickets in your first and second overs in Test cricket, and to get scalps of Graeme Smith, Jacques Kallis, and Hashim Amla in your first outing is something that Tanvir Ahmed will always be remembered for.

There are two performances that can qualify under this title, but one of them deserves a much higher rank on my list. When Jacques Kallis flicked Jaidev Unadkat to the fine leg boundary, he reached the score of 200 for the first time ever in his Test career. The way AB DeVilliers, his partner at the crease, and the rest of the South African team in the dressing room celebrated showed what the feat meant to Kallis and to the team. It was a huge rabbit that had been disturbing Kallis’ back, and it’s finally off it. The significance of the feat lies in the fact that Kallis had played over 140 Test matches, batted over 240 times, scored over 11,000 runs, and hit 37 centuries in a career spanning 15 years before he hit his first double century!

The only triple century in test cricket in 2010 was scored by Chris Gayle. And what a triple century it was! Gayle single handedly demolished Sri Lanka in a brutal innings of 333. His innings came off only 437 deliveries and included 34 boundaries and 9 sixes. Gayle has played a number of whirlwind knocks in all formats of the game, but this innings is surely one of his most memorable ones in my book.

7. When you can’t beat them, join them

With his ability to take wickets slightly on the wane, Harbhajan Singh became quite vocal about the dead pitches being prepared for Test matches. Once he realised that his rants were falling on deaf ears, Bhajji decided that it might be best to stop complaining about the lack of wickets, and start making the most of the dead pitches by scoring some runs. He first notched up a 69 in the 1st innings of the 1st Test against New Zealand. He followed that up with 115 in the next innings – his first ever Test hundred. To make sure that the ton was not regarded as a fluke, Bhajji returned in the 2nd Test with another century – this time an unbeaten 111. It’s widely considered that batsmen peak at the age of 30 and Harbhajan Singh has done exactly that.

Hatricks are always memorable and fun to watch in cricket. There weren’t many this year, but the one that will probably remain in my mind is Peter Siddle’s hatrick on the first day of the Ashes series that is currently going on. Returning to test cricket after a back injury, Siddle had a lot to prove. And he managed to do it by snaring a well set Alistair Cook, Matt Prior, and Stuart Broad in successive deliveries to set up the series in the most emphatic fashion. It was truly the best way to kick off an Ashes series.

This one is a nightmare for Pakistani fans, but when looking at it purely from a cricket fan’s point of view, Michael Hussey’s unbeaten 60 in the semi final of the World T20 against Pakistan is the best ever T20 innings in my books. Since the days of Wasim and Waqar, I have never seen anyone take a game away from a team the way Hussey took the game away from Pakistan. His 60 took a mere 24 deliveries and when he came to the crease Australia still required 87 runs to win in 7.3 overs with half the team back in the pavilion. It looked impossible even when 47 runs were required of the final 3 overs, and even when 18 were required of the final over. For Hussey that day, impossible was nothing.

When England won the 4th Test against Australia at the MCG in the ongoing Ashes series, they also retained the Ashes and did what no other English team had done in 24 years – win the Ashes on Australian soil. The celebrations at the end of that Test will be etched in my mind for a long time to come – the way the England team celebrated just shows how much the victory means to them. And we can all admit that there is that extra pleasure that we all derive out of watching Australia lose.

No one could have imagined in their wildest dreams that Pakistan would beat Australia in a Test match, let alone bowl them out for 88. Pakistan did both, and how?! It was one of the sweetest ever Test victories for Pakistan in the 2nd Test against Australia at Leeds.

It took Pakistan 15 years to beat Australia in a Test match, which made the victory even sweeter. The batsmen made all of us sweat and they made it more difficult than it was, but when it ended it felt really good. If Pakistan’s batsmen had done better during the year, Australia’s 88 would have been the lowest test total in 2010.

When a 200 would be scored in an ODI was something that everyone wondered. Sanath Jayasuriya was widely regarded as the man who would do it first, while many thought that if anyone could do it, it was Adam Gilchrist. Many thought Virender Sehwag would be the one to achieve the feat. I used to hope no one ever gets there so that Saeed Anwar’s record remains intact; secretly I used to dream of Shahid Afridi doing it.

But, I can safely say that if there was anyone who deserved to achieve the feat first and who deserved to break Saeed Anwar’s record, it is Sachin Tendulkar. Sachin holds most of the batting records there are in ODI cricket and Test cricket, and the first ever 200 in ODI cricket is also his! Even though it came of only 147 deliveries, it wasn’t an all out slog fest, but rather a classical innings from the game’s greatest ever batsman. It came in the 2nd ODI against South Africa in Gwalior and fittingly, it was the last ODI Sachin played in 2010.

This one, I will never forget.

Pakistan are generally extremely bad at chasing a total. When the total is as high as 286, they are even worse. No one really expects Pakistan to chase a low total, let alone one as high as 286. And then when Shahid Afridi got out leaving the team at 136-5 in 29 overs, most people would turned their TVs off considering that the 286 is now an impossible task. Very few people believed that Abdul Razzaq walked out to the crease in the 30th over and hit an unbeaten 109 off 72 deliveries with 10 sixes and 7 boundaries to take Pakistan to a one wicket victory with one ball to spare over South Africa in Abu Dhabi! It was that type of innings that you don’t get to watch ever. It was that type of innings that you can never forget. In my books, it was the best ever ODI innings played in a chase, not only this year, but in ODI history.

The way Razzaq single handedly took the game away from South Africa was quite unbelievable. I said above that I had not seen someone take a game away like Hussey did since the days of Wasim and Waqar. Well for me, Razzaq’s feat was a notch above what Wasim and Waqar used to do as well.

Many Pakistanis will say that 2010 was a cricket year they would like to forget; despite that, I believe that there were many positives that can be taken out of the year for Pakistan cricket and cricket in general. It was a memorable year in more ways than one, and Pakistan ended 2010 on a victorious note with their largest ever win in a T20 game.

Here’s hoping to a better 2011 with many more victories for Pakistan, and many more memorable cricket performances all around the world.

Earlier the author of this blog was incorrectly stated as Umair Kazi instead of Umair Qazi.