Tea and biscuits for the hated 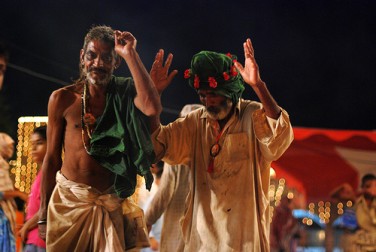 The Lancaster's feature reveals that poor people in a "failed state" know about American pop culture.

It seems like every day there’s a new steaming pile of nonsense published in the mainstream media about the Muslim world. For a geographically disparate grouping of countries that’s so incredibly important geo-politically it certainly isn’t easy to find informed comment and analysis, certainly not in the papers that constitute regular reading for many people in the West. If people are still beating the ‘clash of civilisations’ drum and decrying that ‘they hate our feedom’ then we know we have a problem.

Take National Geographic, a magazine that claims to have been “inspiring people to care about the planet since 1888.” If the feature about Pakistan it’s running this month, written by John Lancaster, is anything to go by then the inspiration is going to lead to more misinformed pity, orientalist ‘Other’-ism and fear-mongering. This might help people to ‘care’ but it does nothing to improve the greater scheme of things.

Lancaster was the Washington Post’s South Asia correspondent from 2000-2006 and was based in Delhi. I find it difficult to fathom how a man who spent so long embedded in one of South Asia’s greatest cities could so spectacularly fail to understand the situation on the ground in any kind of complex cultural context. I haven’t even been to Pakistan but his latest piece for National Geographic is so obviously horrible that it makes my nostrils bleed with the stench of it.

I was unable to get past the opening page’s introductory abstract before vomiting in my mouth a little bit:

The Taliban would not be amused. On a sunny winter afternoon in Lahore, the local culturati have turned out in force for the annual show at the National College of Arts. In the main courtyard young men and women mingle easily, smoking and sipping from cans of Red Bull. Some of the men sport ponytails, and one has a pierced eyebrow. [NatGeo Page 1]

And it doesn’t get any better from there. Lancaster leads us into a web of juxtapositions all reliant on one single premise: that Pakistan is a weird conservative Muslim country that’s really poor and has lots of terrorism but OMG they also like normal Western-type stuff sometimes! Some of their men wear ponytails! One dude even had a pierced eyebrow! Maybe later they’ll all get together and have an early 90s party, wear flannel and watch Home Alone!

Even when Lancaster gets investigative, actually talks to people and describes specifics it fails to get any better. For example, to illustrate the sore thumb nature of Aitchison college, Lancaster chooses to provide us with the following:

The Aitchisonians, thoroughly versed in Amer­ican pop culture, chatter at dinner about the relative hotness of J-Lo and Salma Hayek. Both they and their teachers are infused with a strong sense of Muslim identity and, at times, grievance, especially toward the United States. “We all thought you were a spy,” one of the teachers told me after I spent time teaching at the school in 2009, “We hate Americans.” [Page 4]

Wow, isn’t that a curious paradox! Those crazy natives can talk about American pop culture on one hand but hate on America on the other! Why is it, that in the age of the internet and global media, it’s still considered legitimate journalism to point out that people in other countries know about American pop idols? What is that meant to illustrate exactly? And why is their interest in American pop culture supposed to be mutually exclusive to their opposition to US foreign policy?

But it gets worse. Watch Lancaster clumsily segue from a paragraph about women who dance for men in dingy clubs to Sufis:

“The wildest dancing I saw in Lahore was not in a theater but in a place of worship.” [Page 4]

Or be amazed by how Muslims surprisingly respect Jesus. We’re supposed to have the prior expectation that Muslims all hate Christians and want to kill us, remember?

“A white-bearded man gripped my arm. “We like Jesus!” he declared in English. “Jesus is a prophet too!” [Page 5]

Later, Lancaster spends an entire page telling us about how dangerous madrassas are supposed to be and then surprises us with how hospitably he was received at the one that he visited:

I didn’t expect to get past the gate, so I was surprised when, after a phone call or two, we were invited to return later that day to meet the nazim, or chief administrator. “It is in the tradition of the Prophet to be hospitable,” said Mau­lana Imdad Ullah, greeting us in a small ante­room over tea and lemon biscuits. [Page 6]

You expect to be beheaded on videotape to the shouts of “Allahu Akbar!” and instead you’re served tea and lemon biscuits. Wonders must truly never cease for John Lancaster.

To wrap up the piece, Lancaster provides further shocking news, that Pakistan suffers from income disparity where some people are, like, really rich… in a poor country! [Page 7] Never mind that this occurs in practically every single developing nation the world over, the sheer injustice of it all is still supposed to surprise us.

And just when you think that maybe it’s over, maybe Lancaster has gone through every single possible cliche in the book and has finally run out, maybe he will be forced to contribute something new to the broad field of writing about Pakistan, the piece ends with the most common traveller’s cliche of all:

I hadn’t been there long when an elderly woman walked up to me and extended a cardboard box. “You must have a sweet,” she insisted. “It is being offered in the saint’s name.” I was touched by this gesture to a stranger, which reassured me that somehow Bulleh Shah’s teachings had not been forgotten—and might yet prove more enduring than the Taliban’s. The taste of the woman’s offer­ing lingered for a long time. [Page 8]

Excuse me while I dry retch some more. I forgot that in order to write a successful travel piece about a developing country you need to mention that the locals are surprisingly friendly and hospitable and will even offer you things, in spite of their despotic government/conservative religion/terorrism/poverty/crime.  You need to illustrate this with an example of a local, preferably someone old and very poor who doesn’t speak good English, who offers you a small meaningless token despite being a stranger. Cue the collective: “awwwwww!”

So Lancaster lived in Egypt and Delhi for years, was a bureau chief for one of the biggest papers in the US, and the best he can come up with for his National Geographic feature (!) is that Sufis dance, Jesus is a Prophet in Islam and that poor people in a “failed state” know about American pop culture while simultaneously hating on its foreign policy and offering him sweets. This could’ve been written by a student backpacker.

But the most dangerous thing about this sort of reporting is not the lazy nature of it, not the sad state of affairs that many of the world’s top publications still find themselves in and not the insult to our intelligence that it delivers. The danger lies in what it says about the reading public. We, as the loosely termed West, the educated elite that read National Geographic and The Washington Post, are supposed to see Pakistan as a country of poverty-stricken, ignorant and illiterate terrorists who ‘hate our freedoms’ with a vengeance and will nuke us at the very first opportunity. We are then supposed to be surprised by how friendly people in Pakistan actually are, how much they know about our way of life and in how much danger these relatively friendly, sort of liberal people are from some boogeyman (in this case the Taliban). Cue audience bemusement when US pop culture and foreign policy is erroneously conflated and we discover that people can simultaneously love J-Lo but hate US support for Israel. We are meant to be overcome with pity, curiosity and bemusement for the next 23 minutes, then we go to Starbucks, forget all about it and read an identical piece a week later and think exactly the same things.

The fact that the sheer orientalism, paternalism and outright ignorance embedded in this piece represent the status quo for Western readers everywhere scares me. It scares me a lot. These readers will go on to vote for governments that can go nuts with foreign policy towards countries like Pakistan as long as it’s positioned in a way that plays into their consitutents’ ignorance. If we don’t have good quality reporting about places like Pakistan, how can people become informed about a place they might never be able to visit? Clearly, National Geographic inspires with little more than the same token surface reporting that’s been written for decades and hasn’t change much since the days of Kipling and Flaubert.