Is China justified in rejecting the UN tribunal award on its claims over the South China Sea? 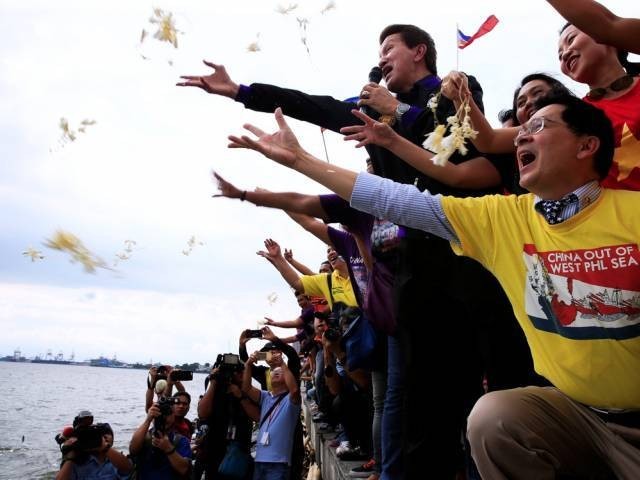 Protesters throws flowers while chanting anti-Chinese slogans during a rally by different activist groups over the South China Sea disputes, along a bay in metro Manila, Philippines July 12, 2016. PHOTO: REUTERS

The United Nation’s appointed ‘Permanent Court of Arbitration’ has rejected China’s claims over the South China Sea, as well as the Islands within it.

In a landmark judgment, delivered on Tuesday, the arbitration court found that China had no historical rights over the waters of the South China Sea and had violated the Philippines sovereign rights in its exclusive economic zone by,

3. Failing to prevent Chinese fishermen from fishing in the zone.

The tribunal had also claimed that fishermen from the Philippines (like those from China) had traditional fishing rights at Scarborough Shoal, and that China had interfered with these rights in restricting access. It was further concluded that Chinese law enforcement vessels had unlawfully created a serious risk of collision when they physically obstructed Philippine vessels.

The Hague tribunal also condemned China’s land reclamation projects and its construction of seven artificial islands in the Spratly Islands. They concluded that it had caused “severe harm to the coral reef environment and violated its obligation to preserve and protect fragile ecosystems and the habitat of depleted, threatened, or endangered species”. The judgment is a great victory for the Philippines as the tribunal has upheld the sanctity of international law.

On the other hand, the judgment will come as a serious setback for China; Vietnam can now approach the tribunal regarding China’s claim over the Paracel island under the nine-dash line as, both, Paracel and Spartly Islands have always been a part of China – dating as far back as the Ming dynasty. Incidentally, China refused to participate in the hearings conducted by the tribunal.

China, as expected, has declared the award as invalid with no binding force. The judgment assumes significance, as the court has protected the rights of small countries over the claims of a big economic superpower like China.

In fact, experts feel that, as an emerging global power, China should have acted more responsibly and should have negotiated a settlement with the Philippines, instead of bulldozing its small neighbour. It is hoped that the international tribunal’s ruling will force Beijing to act with sobriety and look for a settlement that is acceptable to all the claimants. This can be done by creating a favourable environment which requires scaling back military expansion in the disputed islands.

Many countries in the region are worried that China will react to the decision by accelerating its efforts to assert control over the South China Sea, which includes vital trade routes and fishing waters as well as potential oil and mineral deposits.

We are living in troubled times with conflicts engulfing the Middle East, Afghanistan, Somalia, Sudan, Nigeria, the recent terrorist attacks in Bangladesh, and also in other parts of the world. However, the South East Asian countries have so far remained relatively peaceful. But, with the aggressive design of the People’s Republic of China in developing the disputed Islands in South China Sea, a potential conflict is slowly brewing in the region.

The bone of contention has been two main islands – Paracel and Spartly Islands, a maritime region believed to hold a wealth of untapped oil and gas reserves, claimed by China as these islands, shoals, and atolls belonged to them from the early Ming dynasty. Hence, this has been contested by their neighbours. While Taiwan and Vietnam have also staked claims over Parcel Islands, the Spratly Islands have been claimed by Brunei, Malaysia and the Philippines. Earlier China had a spat with Japan over islands in the East China Sea. China has also not been willing to settle its border dispute with India.

The problem started in 1995, when China took control of the disputed Mischief Reef, constructing octagonal huts to serve as shelters for fishermen in spite of protests from the Philippines. In 1997, Philippines sent naval ships to prevent Chinese boats from approaching Scarborough Shoal, eliciting a strong protest from China. Philippines, on the other hand, have claimed Spartly islands and Scarborough Shoal because of its close proximity to Vietnam and the Philippines. Malaysia and Brunei also lay claim to territory in the South China Sea as it falls within their economic exclusion zones, as defined by the United Nations Convention on the Law of the Sea (UNCLOS). China has, lately, turned several rocks and reefs into military bases and other facilities causing growing tension with Vietnam and Philippines.

The US has asked China not to develop the disputed areas due to tensions with Vietnam, Taiwan, Malaysia and Philippines. It also maintained that China can’t take away the right to free navigation in the disputed territories. It sent naval frigates in October 2015 within 12 nautical miles of a Chinese artificial island. Earlier this year in January, the US Navy destroyer again sailed within 12 nautical miles of a disputed island in the Parcel chain of the South China Sea. As a result, China has accused the US of seeking maritime hegemony and for its blatant violation of entering the disputed territory in the garb of freedom of navigation.

The Philippines also made efforts to settle the differences peacefully with China, but as China was not willing to let go of its claims, the Philippines referred the matter to the Permanent Court of Arbitration in The Hague. China refused to accept the jurisdiction of the Permanent Court of Arbitration on the grounds that the arbitration did not have any locus standi to meddle; satellite images also show the military build-up on the islands.

It is hoped that China will continue to engage with all the four countries involved in the dispute in finding a peaceful resolution in the matter. The new President of Philippines, Rodrigo Duterte, has already shown his willingness to settle the dispute through negotiations. China should seize this opportunity and go for a negotiated settlement with the Philippines and other countries.

If China continues to proceed with aggression, it will only end up antagonising several stakeholders in South East Asia. Moreover, at a time when China is on the cusp of becoming an economic power, it should show magnanimity, sobriety and try to settle disputes in a spirit of accommodation so that it gains international respect. The US, on its part, should not escalate the issue by sending naval frigates to the disputed waters.