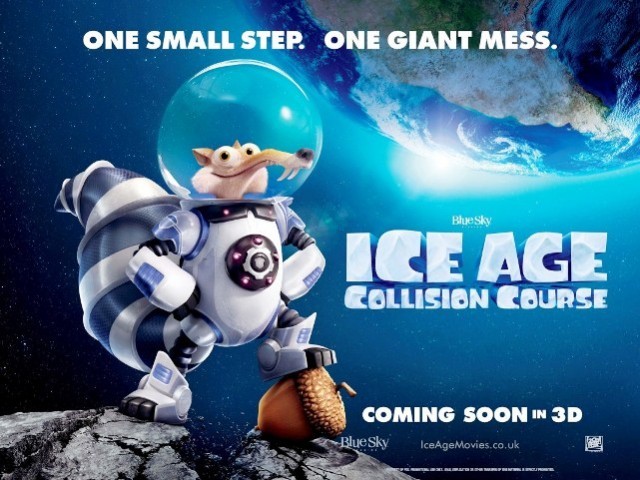 Somewhere close to the end of Ice Age: Collision Course, while struggling to avert the cataclysm that an incoming killer asteroid is about to bring, Woolly mammoth Manny laments,

It’s a sentiment likely to be shared by a majority subjected to this insultingly lazy fifth instalment of the animated series based on primeval creatures.

Roughly 13 years on since the first Ice Age was released, there’s no polite way to put it than to say the franchise, like the prehistoric characters inhabiting it, should have long been extinct.

But we have still got Scrat, the squirrel-rat mash up with Wile E Coyote style eccentricities, whose acorn antics I personally could watch for hours.

Well once again an Ice Age film kicks-off with this favourite hyperactive rodent of ours, who in his attempt to hide the elusive nut, ends up in a flying saucer, accidentally launching it into outer space and setting off a chain of events that send an asteroid hurtling towards our planet.

On earth, the rest of the primal gang including the original trio Manny (Ray Romano), Sid (John Leguizamo) and Diego (Denis Leary) are having personal problems of their own, but off course all these petty matters are rendered pointless when they have to team-up to avert the meteor apocalypse heading their way.

With a plot which is terribly contrived and characters that are nauseatingly charmless, you guys, within no time, would find yourself on Team Meteor.

There is only so much of burping, sneezing and farting that one can endure under the guise of slapstick comedy and watching these gags pulled off by performers with charisma equal to that of our beloved President Mamnoon Hussain, the movie quickly becomes an act of patience-testing.

The franchise started off with three main protagonists in Ice Age 1, this edition now has almost 10. So no matter how hard the writers tried to cram all of them in, with a running time of 94 minutes, we the audience end up caring for none of them.

Adding new characters over the course of the previous four movies has overloaded the proceedings. There is so much going on, with hardly any time left to scratch the important themes beneath the surface.

I find it really hard to believe that with a narrative this overly complicated including all the clichéd and underwhelming subplots, the movie was primarily directed at kids. Because the humour wasn’t funny at all – not for children, not for adults, not even for dogs! So who the hell were the filmmakers targeting?

The biggest (and perhaps the only) improvement on the first instalment is the high quality animation, which is somewhat a given considering the 15-year gap between the films.

The Ice Age fares are so utterly drab and interchangeable that if the studio reissued an old one under a new title, it’s quite possible that no one would notice.