The only country ‘sponsoring terrorism’ is the United States of America 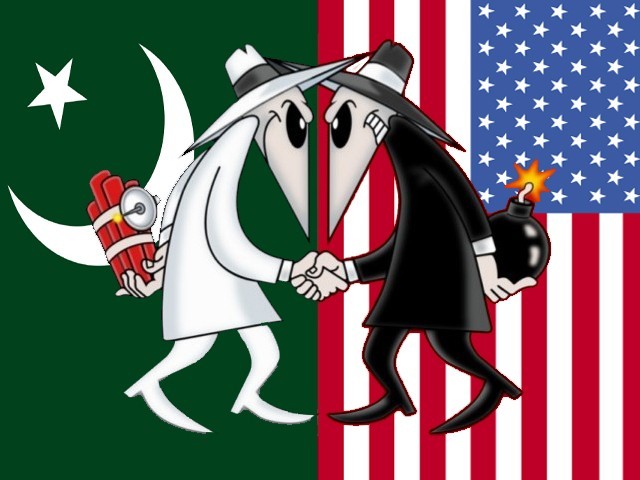 So, if America acts hypocritically in the name of ‘national security’, why does it not allow other countries do the same?

News is meant to be serious and, apparently, so are the legal proceedings attended by lawmakers. Unfortunately, in our country, parliamentary proceedings are exceedingly boring but funny; not because of the content but because of the kind of characters who inhabit our parliament. A great example is Shah Sahib’s sadness at the murder of Junaid Jamshed which sparked a round of hilarious memes.

What tickles my funny bone even more is when lawmakers abroad have long discussions about something absolutely absurd or condemning actions which their country is itself involved in. A recent example of this happened last week when the US House Foreign Affairs Committee held a Joint Subcommittee hearing titled ‘Pakistan: Friend or Foe in the Fight Against Terrorism?’.

The committee consisted of numerous American foreign policy hawks whose main concern was the role played by Pakistan in the fight against terrorism. Chief participant was Zalmay Khalilzad who had his heyday during Bush Junior’s administration when he held important posts including ambassadorial assignments to Afghanistan, Iraq and the United Nations. Important to note is that he was made Ambassador to countries that Bush invaded following 9/11 and was handed honorary ambassadorial positions prior to the invasions. (One needs to read through his resumé to comprehend his clout during those years).

The hearing called up Zalmay Khalilzad, ‘sensational’ journalist Bill Roggio and other officials who lamented Pakistan’s alleged duplicity in its dealings with America in the War on Terror. There was excessive clamour over Pakistan’s links to terrorists and its using them to ‘endanger the national security of the US.’

To sum up the proceedings, there was a growing consensus that Pakistan needs to be removed from the list of US allies and should be branded a ‘terrorist’ or ‘a terrorism sponsoring nation’. Needless to say, they called for the cessation of all military and other aid to Pakistan as long as it continued to make a “chump” out of America. To quote Congressman Matt Salmon, Chairman of the Asia and Pacific Subcommittee of House Foreign Affairs Committee,

“They are making chumps out of us. They see us we are being so stupid. It seems like paying the mafia.”

Being called the mafia, by the biggest mafioso in the modern world is just hilarious. Since when did the US care about duplicity and ‘double-think’ in foreign policy? Historically, duplicity and hypocrisy are their most standard foreign policy SOPs. A few simple examples should be sufficient to highlight this.

Support for ‘democracy and freedom’ in the world especially committing troops to bring democracy to countries such as Iraq, while openly supporting, colluding and allying itself with the most repressive monarchies and regimes in the world such as Saudi Arabia, Qatar, Bahrain, Hosni Mubarak’s Egypt and Israel. Funding Nicaraguan Contra guerrillas through the sale of arms to a hostile Iran (aka as the Iran-Contra Affair), while already funding an anti-Iran Saddam Hussein.

Last, but not the least, fighting ‘terrorism’ around world while aiding terrorists in Libya and Syria through its ‘training and equipping program’ to remove an ‘unfavourable dictator’ from the region.

How does America actually justify these actions and their underlying strategies? The most commonly used reason is of course ‘national security’. So, if America acts hypocritically in the name of ‘national security’, why does it not allow other countries do the same? What gives America ‘the moral high ground’ that it so often claims to have when attacking other countries pre-emptively?

The obvious answer is power and its imperial clout. When countries carry out war crimes in US national interest for example the flagrant use of chemical weapons by Saddam’s Iraq against Iran, it is not a crime per se but as soon as Saddam is on the other side of the fence, Iraq is invaded for the same WMDs.

The ‘terrorists’ that America claims Pakistan supports were all created for the US-backed war against the Soviets in Afghanistan. The US establishment and notable politicians have acknowledged this fact openly in recent times. The American support for terrorists and creating terrorists is almost legendary from Osama bin Laden to ISIS. Listen to Putin, if you don’t believe me:

The committee proceedings also claimed Pakistan was providing a safe haven for terrorists. This was based mostly on the information provided by the Afghan government. Wow! The foremost exporter of illegal arms, drugs and religious mercenaries, which has used our country as their own backyard turns around and calls us the sponsor of terrorism. Who brought this terrorism into our ranks in the first place, I wonder? If the American government hates terrorism and terrorist sponsoring countries, it should stop being one itself.

That said, I don’t think we should absolve ourselves of a lot of what is levied against us. Pakistan did help create the bolstering ranks of mujahideen, which later morphed into the Taliban. We did provide unabated access to our madrassas, allowing them to be twisted into religious-mercenary producing factories. We are still not clamping down on our ‘banned organisations’ despite our proclaimed  No Action Plan (NAP), who can be seen collecting funds from a public too dumb to differentiate between them and actual religious missionaries.

Why are the rangers posted outside mosques ignoring them is anyone’s guess.

Pakistan does need to revisit its ‘security strategies’. It also needs to get rid of all those banned organisations, which are detrimental to its citizens. Pakistan needs constructive criticism – but from its own people. Just not from the ones who catalysed the creation of this muck in the first place.