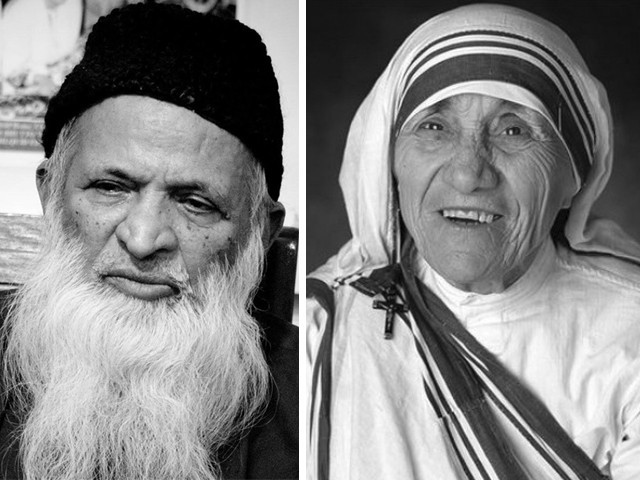 Mother Teresa was never ostracised nor attacked for her strong Roman Catholic beliefs, Edhi on the other hand has been accused of being an ‘infidel’ and an ‘atheist’ for his beliefs, or lack thereof.

Abdul Sattar Edhi was a great man. He was one of the greatest men Pakistan – and perhaps even the whole world ­– would probably witness in our lifetime. For, in a country ridden with much despondency, Edhi’s existence served as a beacon of hope for those who bore first hand witnesses to injustice and inequality.

His founding of the Edhi Foundation – a momentous philanthropic organisation dedicated to serving the poor and the destitute in the country for over six decades – provided light where there was incessant darkness.

He saved lives, time and time again, lives that weren’t supposed to matter. He forgave the unforgiving, loved the unwanted, cared for the sick and the dying, and salvaged them from the demise that would have been their fate. And while he is no longer with us, his simplicity, selfless and exceptionally giving nature will forever be commemorated, and hopefully even emulated, in many years to come.

Some called him a saint, a rather apposite title, while others often dubbed him as ‘Pakistan’s Mother Teresa,’ which in my personal opinion is not as favourable. As a matter of fact, to say that Edhi is ‘Pakistan’s Mother Teresa’ deeply undermines his individuality and importance; it actually serves as a sole point of comparison, when the two individuals shouldn’t even have to be compared in the first place.

I realise the reason why they are often associated together is due to the similar humanitarian work they have done over the course of their lifetimes, but there is something quite demeaning having to dub someone or someone’s work with the name or title of another person, diminishing both that person’s work and worth. Although Edhi and Mother Teresa were known as prominent philanthropists, dedicated to saving and bettering the lives of the poor and needy, we also need to remind ourselves that they did not lead similar lives, nor did they have similar experiences.

Mother Teresa was far more privileged than Edhi – she was an Albanian woman who had gone to India through an Irish order to become a missionary; in the process she started to help the poor and dedicated her work to improving lives. Although she was known as a rather controversial figure, I say ‘privileged’ because unlike Edhi, she never received death threats; she never had to witness her ambulances being attacked or blown up by religious extremists; she never had to face harsh criticisms for saving the lives of children that were unwanted/conceived out of wedlock, or young pregnant girls who were not married, but had suffered rape, incest, or the mistake of falling in love and falling pregnant.

More so, Mother Teresa was never ostracised nor attacked for her strong Roman Catholic beliefs, Edhi on the other hand, has been accused of being an ‘infidel’ and an ‘atheist’ for his beliefs, or lack thereof. Even his wife, Bilquis has said that there have been many a time he has been called an infidel simply because he did not say his prayers. Those same mullahs have even gone as far as to say that Edhi will not enter heaven, to which his humble response was,

“I will not go to paradise where these types of people go, I will go to heaven where the poor and miserable people live.”

It’s important we recognise that Edhi’s legacy is his own, without having to compare his charity work to the likes of Mother Teresa, or anyone else for that matter. He started his work on his own terms, through his own means and struggles. He and his work should never be compared to anyone, regardless of how great or similar their work has also been. Otherwise, it undermines him – resorting him to nothing more than just a shadow of the person he is constantly being compared to.

His name was Abdul Sattar Edhi, and he was a simple man with a heart of gold. He was not Pakistan’s Mother or Father Teresa, for he was his own person, most worthy of a work he started from scratch out of his love and dedication for the poor and the needy. I will never resort someone who was as great and wonderful as him, and his name, to simply being a shadow of someone else. And I feel deeply humbled to have witnessed such a magnificent being in my lifetime. He was a man most worthy of all the noble peace prizes in the world. And, it’s time, we acknowledged that.

May he rest in power, and may we use him as an example to constantly strive to better ourselves, and those around us.