Theresa May and the Cutthroat Conservatives 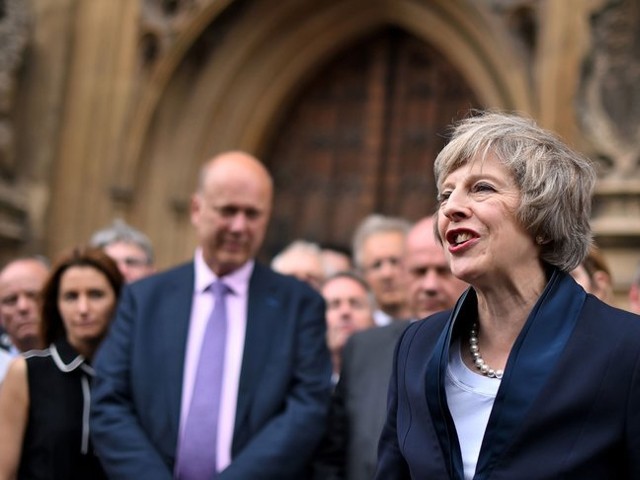 Theresa May spoke outside the Houses of Parliament on Monday. PHOTO: AP

“Brexit means Brexit, and we’re going to make a success of it,”

Theresa May said on Monday, when she became the new leader of the Conservative Party — and therefore Britain’s new prime minister. It was the one discordant note in an otherwise clear, wide-ranging speech.

So Brexit means Brexit. But what does that mean? In the June 23rd referendum on Britain’s membership in the European Union, 52% of voters expressed a desire to leave, having been given precious few details of what exactly that entailed or how it might be achieved. Some 48% voted not to leave at all. Negotiating a deal that satisfies both groups — or even just a healthy minority — is a herculean task for the new government.

Moreover, Britain’s exit from the European Union will now be overseen by someone who advocated staying inside it, albeit tepidly. Ms May’s reassuring sound bite about her commitment to Brexit was aimed at her own colleagues, many of whom are virulent euroskeptics.

The greatest threat she faces comes from them. The only possible alternative government would be led by the Labour Party, which has been hopelessly divided over its future since the election of a left-wing outsider as leader last year.

That kind of disarray would be impossible among the Conservatives. They are democratic Darwinists: Any wounded creature, or even one who no longer smells like a winner, is swiftly and mercilessly dispatched. That ruthlessness brings with it a remarkable ability to regenerate. Once the bloodshed is over, the party swiftly regroups and gets back to the thing it cares most about: being in charge.

So David Cameron was ditched, a mere 13 months after winning the party’s first overall majority since 1992. A leadership contest scheduled to last until September was over within days after successive candidates backstabbed one another or bailed out. The Conservative Party, like Silicon Valley, believes in failing fast.

Now that the corpses of her opponents’ careers have been cleared from the stage, Theresa May reigns supreme without needing to win a vote in either her party or the country. She survived six years as home secretary, overseeing Britain’s security services, borders and police forces. She now begins the equally (or maybe even more) perilous task of selecting a new cabinet to balance the competing interests in the cutthroat Conservative Party.

Ms May will inevitably be compared with Margaret Thatcher, the Conservatives’ last female leader. But a better reference point might be Germany’s Angela Merkel: hard-working, pragmatic, sober to the point of dullness. The endless references to Ms May’s shoes — she has a taste for leopard print and kitten heels — are only partly attributable to sexism. They also reflect that she has few other personal quirks.

A vicar’s daughter who has been married for 36 years, she appeals to the Conservatives’ middle-class, traditionally minded base. But in a speech on July 11th she mentioned subjects not usually championed by the right: police racism, high energy bills, the gender pay gap, the way financially secure older homeowners have prospered at the expense of the young.

In 2002, when she was the party’s chairwoman, Ms May warned her colleagues that they were seen as “the nasty party.” She now plans to chase the votes of working-class white voters and ethnic minorities who are socially conservative but have a historic dislike of the Conservatives. She has won praise from some in Britain’s black community for confronting police racism in a scorching speech in 2014, and curbing the use of stop-and-search. She voted for same-sex marriage in 2013.

There is no doubt she inherits a country with vast challenges ahead. The Conservatives won the last election by insisting they had a “long-term economic plan.” The vote to leave the European Union has seen that plan abandoned. After years of austerity, the government has given up on the goal of running a budget surplus by 2020. This is a gift to Ms May from George Osborne, the chancellor of the Exchequer and architect of austerity: It spares her from trying to make impossibly deep cuts to public services.

A greater problem is immigration, which voters now rate as their number one concern. At the Home Office, Ms May was a hard-liner on the issue, supporting a net migration cap. She now has to reconcile a rising tide of xenophobia with the reality that accepting freedom of movement is a prerequisite for access to the European single market. She also has to concern herself for the first time with the economic impact of reducing immigration, a luxury she escaped as home secretary. That might change her calculations.

On Brexit, Ms May’s best plan is to outsource the inevitably tortuous negotiations to someone whose Europe-baiting credentials cannot be doubted. She has said she plans to appoint a “minister for Brexit,” who will surely be a Leave campaigner. The appointee will also double as a sacrificial lamb if the need arises.

That might not be enough to mollify her ardently euroskeptic colleagues if she is felt to be dragging her feet over the process. The Conservatives will tolerate only so much cautious pragmatism over an issue that provokes such strong feelings among many party members. If Brexit does not mean Brexit, their long knives will be sharpened.

The author is the deputy editor of The New Statesman.