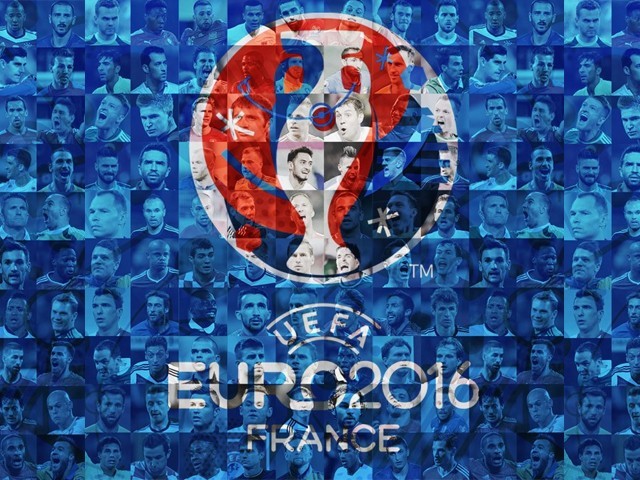 2016 has been a year of surprises in the world of football with underdogs breaking through the dominion of strong teams to claim prizes they previously never dared to dream of. PHOTO: MT.SOHU.COM

UEFA Euro 2016 signed off with numerous lasting memories. It is now time that we bid farewell to a tournament that brought a number of awe-inspiring moments and left the game with a healthy prospect.

This year has been full of surprises in the world of football with underdogs breaking through the dominion of strong teams to claim prizes they previously never dared to dream of.

Let’s look back at the tournament.

During 55 minutes of flogging through a tied score-line against Belgium, Aaron Ramsey charges down the right flank, finds Robson-Kanu, who swiftly finds the ball onto his foot and manages to stay in control. With a neat “Johan Cruyff signature move,” Robson-Kanu turns into a space in between Meunier and Denayer and slots a neat finish beyond Thibaut Courtois’s control.

The emergence of Kanu into this memorable and highly significant forward for Wales is a reflection of their promising campaign. A goal that captivates viewers around the world is certainly a moment to look back on again and again as this tournament’s best. 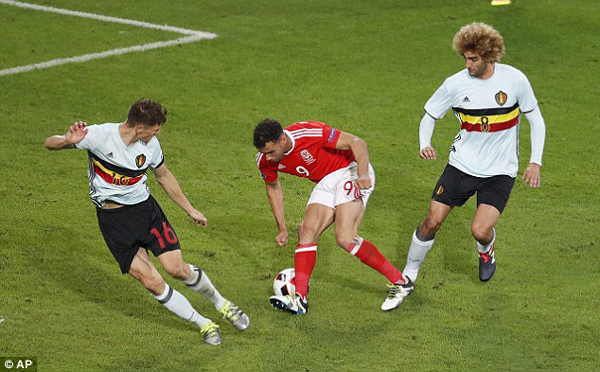 With the game against Belgium in the balance, Hal Robson-Kanu produced a moment of individual brilliance.
Photo: AP 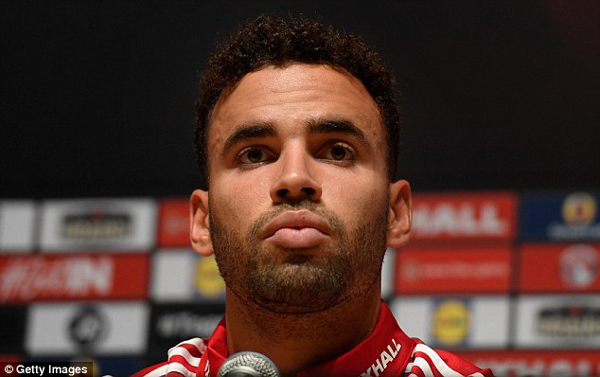 Worst moment of the tournament: Cristiano Ronaldo falling out of the finale in Paris

Portugal’s remarkable run in the tournament was mostly due to their captain Ronaldo. Saving his side from an early exit – scoring two goals against Hungary – in what was deemed another poor show from Portugal. The finale brought the limelight on Ronaldo and expectations surged only to find the 31-year-old seeing the dugout as early as it could be. This shattering moment forced the Real Madrid star to exit the game. Fans around the world assumed silence and Portugal’s chances considerably narrowed with this massive blow at the Stade de France. 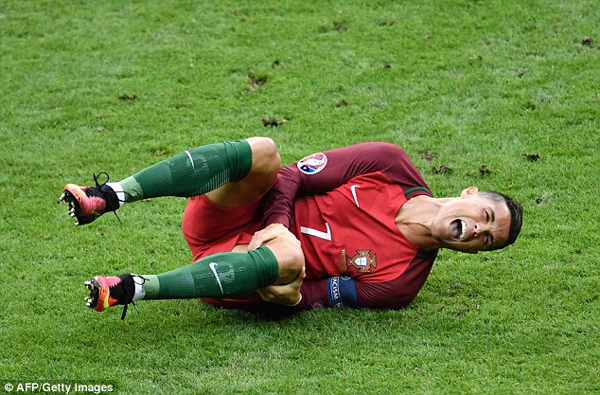 The former Manchester United man screamed in agony after the challenge from Payet that ended his night
Photo: AFP/ Getty 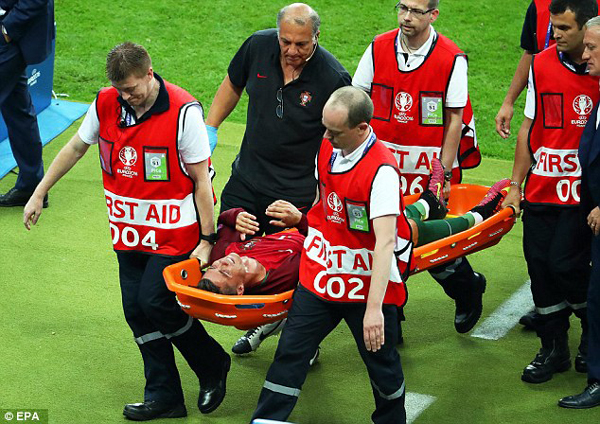 The Portugal captain was carried off on a stretcher in the 24th minute, his Euro 2016 final over
Photo: EPA

You heard it right. Of all the underdogs, Iceland had the best run. They defied all expectations, from making into the group to blowing England’s chances out of the water. With a population of only 323,002 people, there came off a number of players who stole the show a couple of times. Not only did the national side create fond memories for themselves, their superb fanfare left other spectators inspired by their enthusiasm. It is only a matter of time that we see the “Viking chant,” originally introduced by Iceland, to be sung in other iconic stadiums. 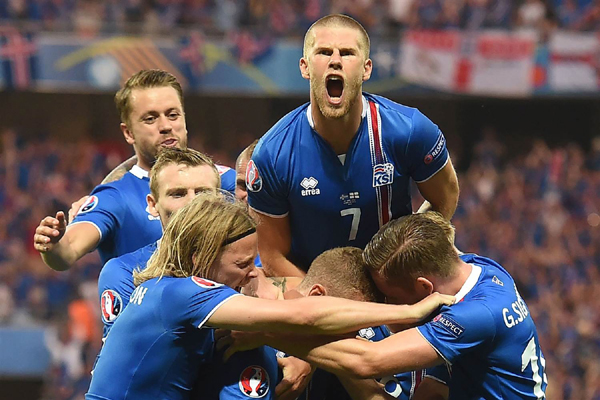 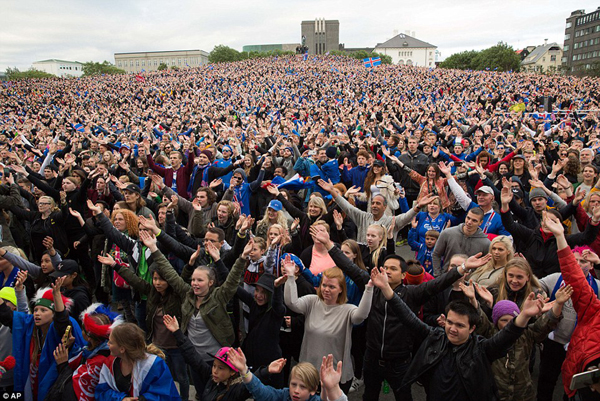 Iceland supporters celebrate a goal for their team against the odds during a public viewing in Reykjavik, Iceland.
Photo: AP 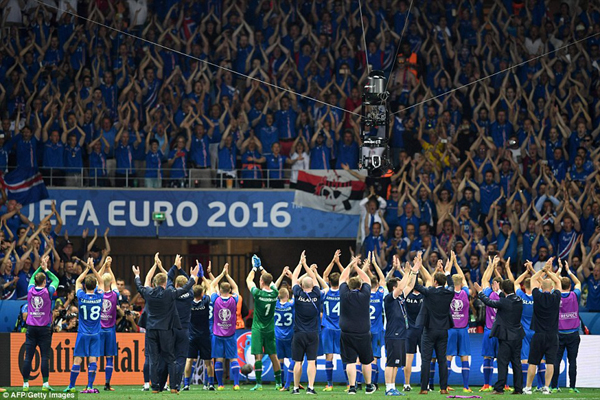 Iceland players acknowledge the crowd as they celebrate their 2-1 win over England in the Euro 2016 knockout match.
Photo: AFP / Getty Images

Most overrated player in the tournament: There’s already a rumour of his imminent £100 million move

Paul Pogba may not yet be taken off for an inconsistent performance, but he should have been whisked away for not making an impact when it was needed. Indeed, Pogba has grown into a unique talent and it’s a dream to have him in your team. 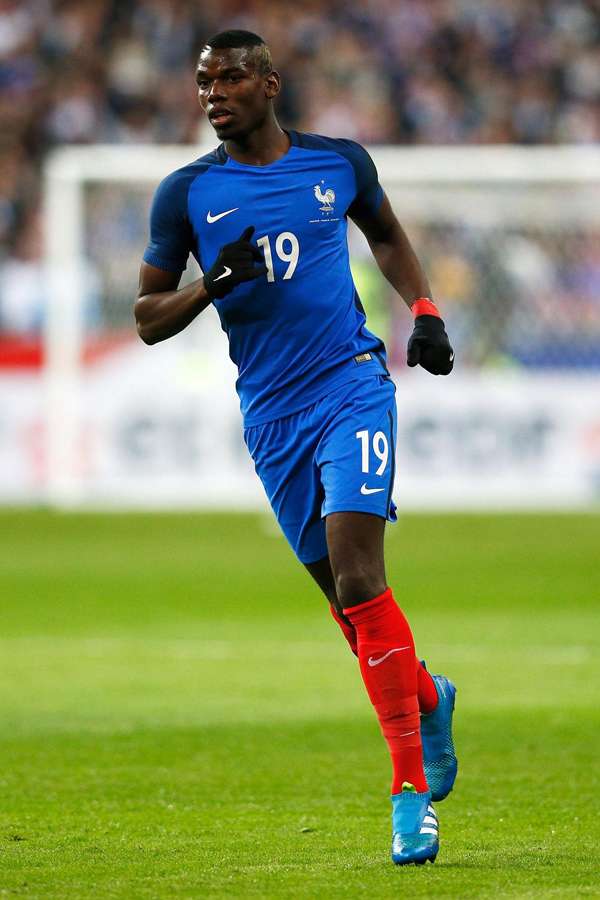 But after failing to make an impact on the field, where it actually matters, many popular pundits have regarded him as an extremely overrated player. In spite of this, he has been heavily linked with his former side, Manchester United, who are willing to break the transfer record this summer.

Perhaps the man of the match of the finale, after Pepe, Rui Patrício cannot be ignored for his services to the team. He is not the greatest of goalkeepers, yet he stood firm each time he was needed for his country. Patrício has left a permanent mark with a remarkable performance in the toughest games. He was half the reason why Portugal denied France a chance every time they charged forward. 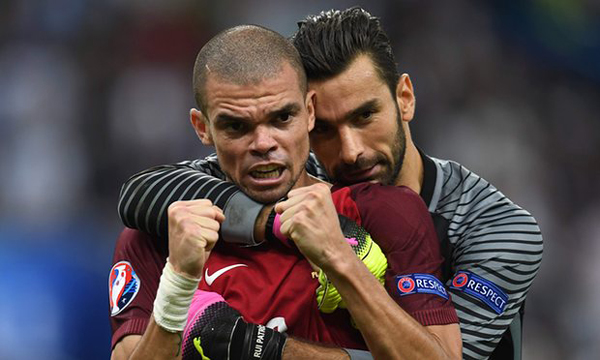 The goalkeeper Rui Patrício and defender Pepe were both outstanding for Portugal in the Euro 2016 final against France.
Photo: Patrik Stollarz / AFP/ Getty Images

Shock moment: England’s embarrassing defeat at the hands of Iceland

Iceland, of all names, wrote history when they overturned the table on the side, fancied as dark horses for the tournament. England was on the receiving end of this humiliation. Goals from Ragnar Sigurðsson and Kolbeinn Sigþórsson inflicted England with their most humiliating defeat ever. 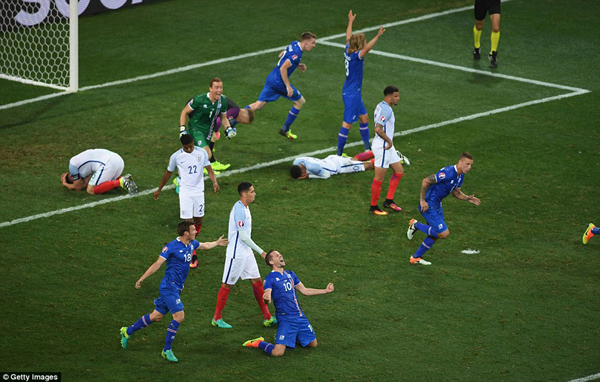 Humiliation England players collapse after losing 1-2 to Iceland and crashing out of Euro 2016 – the country’s worst defeat in its history.
Photo: Getty

England Manager Roy Hodgson decided to resign after failing to deliver the success that he promised. 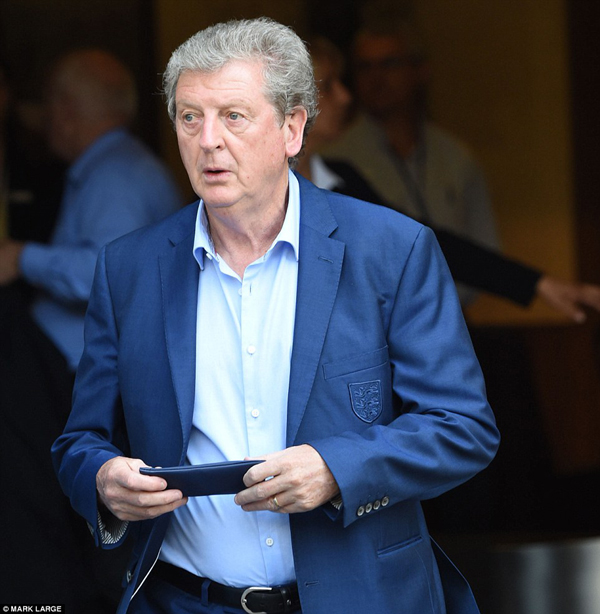 England manager Roy Hodgson who resigned minutes after his team’s dismal performance against the minnows of Iceland.
Photo: Mark Large

Match of the tournament: Portugal 3-3 Hungary

Lyon hosted the best match of the European Championship. It was a game with twists and turns throughout its course. Ronaldo came to the party and Hungary reassured their tenacity again and again. In a contest where you could not think of resting your eyes even for a tad bit, goals one after another, uplifted those who saw this nail-biter unfold. Within 19 minutes, Gera opened the scoring and provided Hungary with a key lead, only for Nani to then equalise right before half time. Right after the break, Hungary scored again, courtesy of a Dzsudzsak’s free kick that saw them back with a lead. They only managed to relish this for three odd minutes, when Ronaldo scored with a staggering back heel flick.

Dzsudzsak scored again, owing to a free-kick! But Ronaldo had the last laugh scoring his second free-kick to bring Portugal head to head with Hungary. 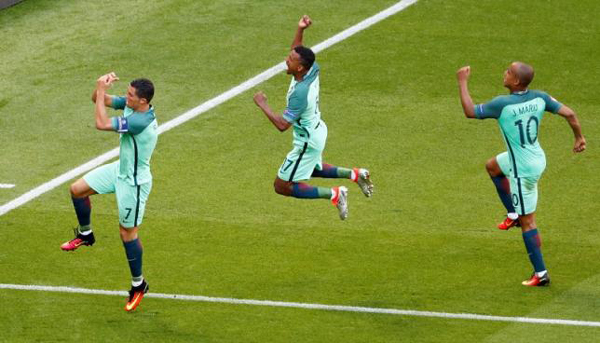 A unique thing about bicycle kicks is that they seem to leave you speechless. Switzerland versus Poland; nerves thumping heavily and each side needed to strike. It just took one decisive second by Xherdan Shaqiri to leave every single spectator gobsmacked. A cross swirling from the left flank takes a bounce right at the edge of the 18-yard box where the Stoke City superstar leaped above the ground, threw his feet in the air and kicked the ball overhead into the bottom right corner.

Shaqiri’s equaliser set the momentum for Switzerland and remained the best goal scored in France this summer. Even Shakira feels the same.

The first time in history that a couple both score goals in the Eurocup – Piqué and Shaquiri!!!

Team of the tournament: I picked my best players and formed this starting eleven.
Formation: 3-5-2

The European Championship was buzzing with names of young stars. These names were backed by expectations; some already landed lucrative contracts and some are already playing for top flight clubs. Portugal’s young talent, Renato Sanches emerged as the most promising one on the pitch. Not considerably known for scoring goals or bagging assists, Sanches changed the course of the game every time he was brought on. Naturally an attack-minded CM, he overturned the style into a more offensive one and consistently lodged a threat from the middle. This year has been a treat for him as he won the Euros and sealed a contract with German giants FC Bayern Munchen. 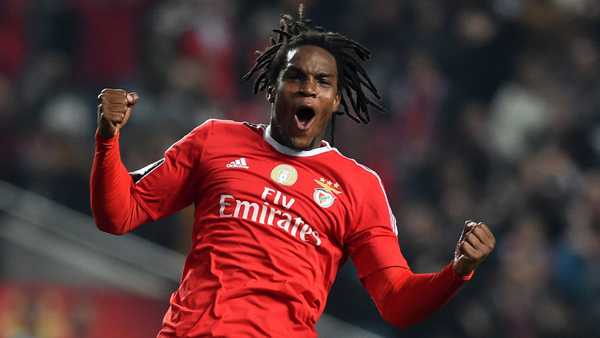 Flop of the tournament: Thomas Müller in the most unexpected portrayal of him

Who could have thought? It was rather believed if Germany led a great campaign, as they did in the past, it’ll be by courtesy of Thomas Müller and his strikes. Germany did lead a great run till the semi-finals, but Müller failed to see the ball past the line. Not once the forward came close; he emerged as a dead weed and almost a liability for the national coach. 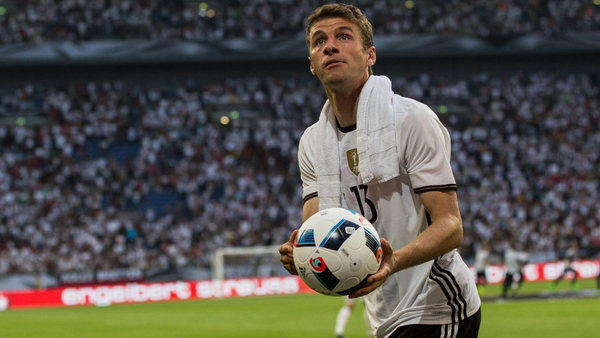 Muller found the net in the second half for Germany against Hungary.
Photo: Twitter

Player of the tournament: Antoine Griezmann

Superman, Batman, Ironman, and then there’s Griezmann. France remained the side with the most perfect team. From a world class keeper to world class forwards; the French had it all. But yet Griezmann remained their best player, scoring six goals. He was a constant threat in attack, found space, forced defenders and drew some epic saves out of world class goal keepers. It was Griezmann who ended the hopes of many teams, including World Champions Germany. The Atletico Madrid forward remains the top-scorer, thus winning the golden boot. He was also officially named the EURO 2016 Player of the Tournament by UEFA 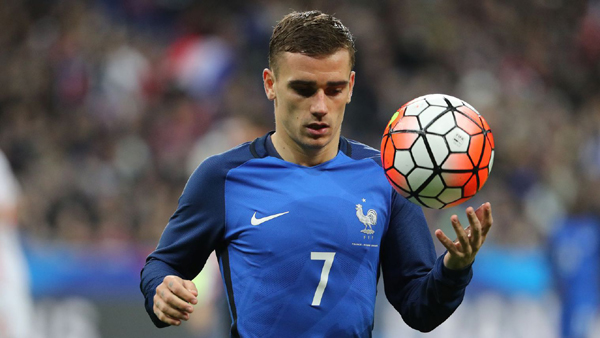