He was only a Buddhist by salutations, just like we are only Muslims by virtue of rituals 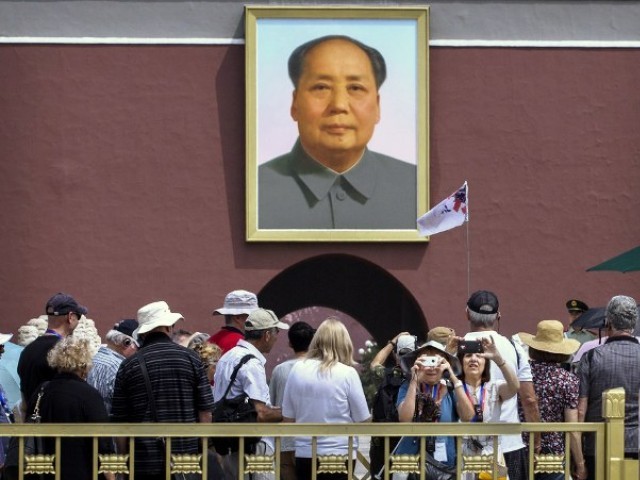 Mao is clearly the highest power in China, so much so that his unburied body is an invitation for so many visitors. PHOTO: KEVIN FRAYER

If you visit the Tiananmen Square at any given day, you’ll see hoards of people flocking around in large groups. Some can be seen led by a guide, others trying to find an inlet to the tunnels that lead to the main square, turning the entire landmark into a beehive. Besides being the womb of the People’s Republic of China where Mao proclaimed the founding of the People’s Republic in 1949, the square also houses the Chairman’s mausoleum.

On my 10 day visit to China, I found the Tiananmen Square to be the most religious of all spaces. It was religious in the most conventional sense; a place oozing with ritual, tradition and submission to a higher power – a place where Chinese visitors outnumber tourists during peak seasons. I last saw this sense of commitment and eagerness when I visited different shrines in Pakistan, but here was buried no sufi saint, no Shah Abdul Latif Bhittai, but a political leader whom the Chinese owe their ‘humanness’ to.

“We were all animals, it was Mao who made us into human beings,” is the common notion shared by the Chinese, with those, well-versed in English terming the pre-Mao version of themselves as barbarians.

Mao is clearly the highest power in China, so much so that his unburied body is an invitation for so many visitors – so many, infact, that on a weekday you’ll have to wait hours just to get a glimpse of it. I unfortunately couldn’t, much to my father’s disappointment, for he was also once one of those Karachi University students who’d keep Mao’s Red Book closer to himself than his jugular vein. He eventually bowed out of it when the progressive front of the student politics equated their ideology with hating religion – they started organising afternoon feasts just to irritate the people who were fasting in Ramazan.

Focusing too much on the ritual and too less on the soul has perhaps been our greatest folly as a nation. Or maybe it’s the selective ritualisiation of practices. Rarely do we see a ritual borrowed from our larger cultural identity being practiced with the state’s patronage, apart from the Sindhi Topi Day which, too, has become a point of debate amongst Sindhologists.

The trend of visiting Mao’s mausoleum is no less than a ritual, but you’re not bound by anyone. It is like visiting Jinnah’s mausoleum but having the respect to not make out in its backyard because you genuinely understand what the person laying there means to you and your generations to come. Sometimes you don’t need to be bribed with trees and therapeutic wine in the afterlife to vouch for common sense and to behave. Even if an authoritarian control over the media has played a pivotal role in achieving those results.

As Jung would put it “who looks outside dreams, who looks inside awakens.”

The ritualising of everything geographic and historic in China has put religion on the backburner. They’re so engrained in their mythology and the economic prosperity that resulted from Mao’s far-left – and now much relaxed – version of socialism that you’ll barely find the concept of religion as we know it.

Spread across more than 56 different ethnicities, Taoism, Confucianism and Buddhism are the three dominant belief systems – with Buddhism being the only one considered a religion per say by the Chinese people. For someone who is used to judging people by their rituals, my first interaction with a Buddhist was when a visitor greeted me by bowing down with his palms together. I was right about him being a Buddhist but he himself wasn’t really sure about it. He was only a Buddhist by salutations; so much in his life was borrowed from Confucius and Lao Tzu’s Taoism that he couldn’t tell where his heart truly belongs.

“So many habits in my lifestyle come from these three traditions that I can’t tell. And they are so in-synch with my routine and the way I and my family think that I actually don’t know their origin. I am sorry,” he apologised, as if quizzed about a general knowledge question.

Perhaps I had made him think in a way he had never thought about religion before. That baffled him as much as his take on religion baffled me. However, the real shock struck him when he came to know we have such clearly defined religious identities. From the religion, to the sect, to the style of praying, so much so that he actually broke into laughter and said, “You guys think too much.”

Maybe we really do think about matters that no longer matter. Maybe, if we were ruled for centuries as a collective (like China) and not as divided colonies, even we would have preserved our sages and saints as mainstream doctrines. Bulleh Shah, Sachal Sarmast, Shah Abdul Latif Bhittai would have made it to the textbooks and our history wouldn’t have started in 720 AD. The dancing girl of Mohenjo Daro would have been our mermaid of sorts and we would have been in a position to criticise Ashutosh Gowarikar’s rather blande and shallow take on the cradle of our civilisation. Punjabi wouldn’t have been an endangered language in a country where its speakers are in the clear majority, and Balochi would have been taught in middle schools in Balochistan instead of Arabic.

Maybe if children in schools read as much on our geographical history as they do on religion, there wouldn’t have been such a huge war on our identity. Maybe it’s time that we don’t rely on this blog and actually go read up on Confucius and Lao Tzu. For as Daniel Quinn says,

“… no one knows anything that can’t be found on a shelf in the public library.”

The author is the Life & Style Editor of The Express Tribune. He tweets as @Rafay_Mahmood

Does Pakistan needlessly love to hate on its censor board?

Six reasons why Moor raised the bar for Pakistani cinema