Will Erdogan join hands with Putin and Netanyahu to eliminate terrorism? 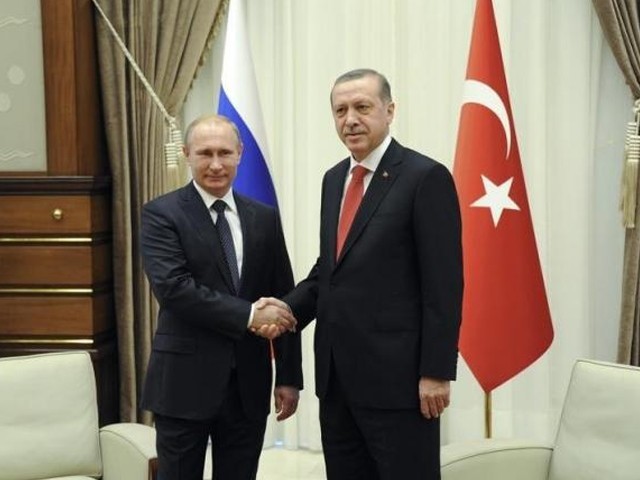 This is like living a nightmare. It seems that the world is literally coming to an unceremonious end. As the ISIS and al Qaeda rampage continues to bleed and butcher the entire globe, it appears that we, as people and citizens of the world, will have to live and breathe in fear for all times to come. Each subsequent carnage carried out by the radicalised groups and their followers taints the faith of those who simply want to live in peace, the hopes of which are fast diminishing.

I was visiting family in the starkly peaceful and surreal Toronto that stands in sharp contrast to its perpetually on-the-edge, panicky neighbour in the south, when I saw a newsflash that the June 28 Istanbul attackers were identified as extremists from Russia, Uzbekistan and Kyrgyzstan. Unlike the Boston bombers who happened to be some stray, misled, attention-seeking schizophrenics, these guys were real hardened criminals who spent years planning with a laser focused mission to destroy innocent human lives.

Turkey has lately been at odds with Russia. It was only recently after months of hiatus when the Turkish President, Recep Erdogan, reached out to Russia’s Vladimir Putin to extend an apology for shooting down a Russian Su-24 warplane over Turkey’s border with Syria in November 2015. From economic as well as strategic standpoints, Turkey made the right call to repair its damaged relationship with Moscow. Because of the Su-24 incident, Turkey’s tourism took a tormenting hit and is projected to lose billions of dollars this year alone on account of the travel embargo on Russian tourists traveling to Turkey. Turks working in Russia and corporations in that country have been asked to either leave or curtail operations because of the Su-24 incident.

Most importantly Russia is a critical factor in Turkey’s fight against ISIS. Just like the Ataturk Airport bombers, many of the radicalised nuts belong to the areas where Vladimir Putin wields influence and can play a key role in sharing intelligence with Turkey and tracking down the extremists. Russia and several independent states of the erstwhile Soviet Union are plagued with Islamic insurgency and can play a pivotal part in Turkey’s fight against ISIS. Putin and Erdogan are two headstrong men who can mutually benefit their nations in controlling a menace that is destroying regional stability and costing precious human life.

Granted that Turkey is a member of NATO and hence must look up to US leadership for resolving an issue of monstrous importance, Ankara should tap into other potential resources and partners to fight terror. Although Erdogan is not a huge fan of Israel, it appears he’s coming around to join forces with Israel in mitigating terrorist related catastrophes.

An avid admirer of Hitler’s presidential system of governance, Erdogan is not necessarily the most popular figure in Israel. However, the latest effort to normalise relations with Israel is an indication that the two countries are now ready to move past the Mavi Marmara incident.

Other than being able to send aid to Gaza and using its influence to halt Hamas attacks on Israel, Turkey can benefit tremendously by using Israel intelligence and armed forces that have, for the most part, handled insurgency in their own backyard quite effectively. Although the most recent treaty has little or nothing to do with working together against ISIS, one is sure that the prospect of such cooperation is not out of question.

It goes without saying that Erdogan may find it rather difficult to deal with the Israeli Prime Minister, Benjamin Netanyahu, since he’s a one heck of a character himself. But one is confident that Erdogan, no less of a dramatics expert himself, can strike up a balance to possibly forge a strategic alliance with Israel.

The war against extremism is a tough one. ISIS, al Qaeda and their offshoots are globally networked. To fight terror, countries will need to join hands, out think borders, religions or age-old allegiances that may have worked in the past but can’t work anymore. The scourge of extremism is a new problem, one that requires new thinking and a quick readjustment of realities.

War against terrorism cannot be fought in silos. Donald Trump’s idea of shutting America off of treaties, alliances and building walls is exactly what the world does not need to counter terrorism. Countries impacted must get together, forge a common front and hit ISIS with brutal force along with establishing intelligence sharing mechanisms. Can’t live in a cloud. Got to synergise.

What we’ve seen so far are minuscule alliances or solo efforts to go after ISIS hideouts. Clearly that strategy is not working. By forging a common front, Erdogan can provide leadership and show the world that ISIS can be blunted by superior diplomacy and a quick-on-the-feet policy. Erdogan must ditch the policy wonks for now and use his street cred to avoid any further June 28-like disasters. Reboot, readjust, plan and execute is the name of the game.