Soaked in scarlet for Eid: Today’s bystander could be tomorrow’s victim 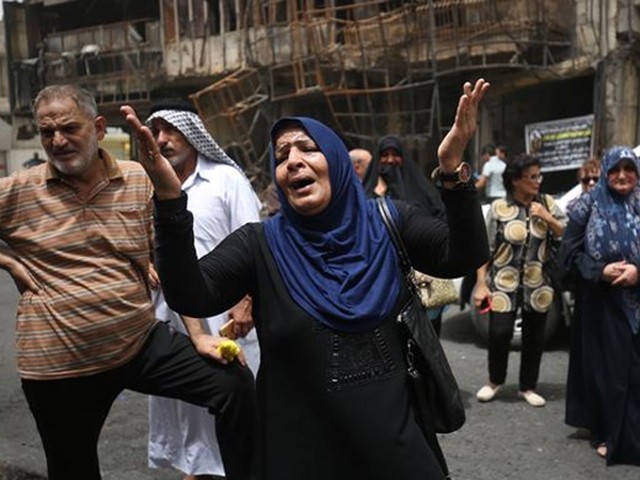 In Islamic countries, unfortunately justice and equality are the rarest of commodities even though Islam’s holy book the Holy Quran elaborates on equality and justice more than any other holy scripture. PHOTO: AFP

The last one week has seen attacks in six different cities of the world, all of which have been claimed by the so called Islamic State, and all of which have made headlines across the globe. People of various religious and denominational persuasions lost lives. They were targeted by the so-called Islamic State loyalists, inflicting carnage that knew no religion or nationality. These attacks should reinforce that IS can represent anything but an Islamic State. If there are any IS apologists even in Pakistan, then they have a lot to ponder upon in finding justifications in defence of the indefensible.

The attack at the Istanbul airport left 45 dead, mostly Turkish Muslims. Nineteen foreigners were amongst the dead too. This indiscriminate killing of humans knows no race or religion yet the thirst for blood is not quenching. 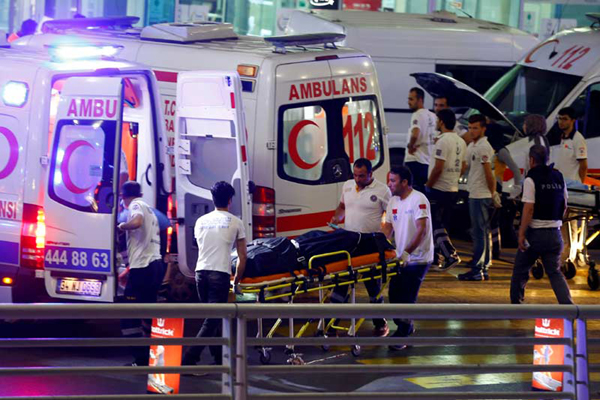 Attackers arrived at the airport in a taxi and blew themselves up after opening fire.
Photo: Reuters 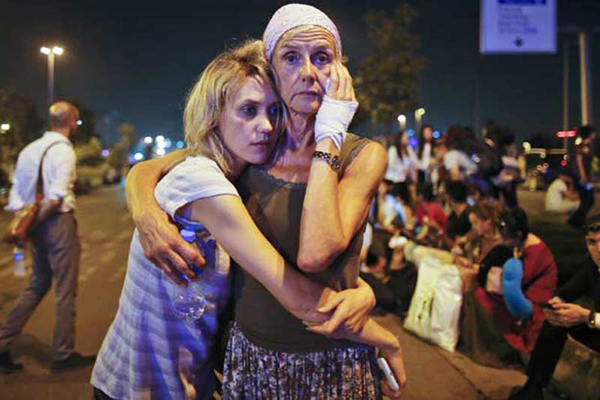 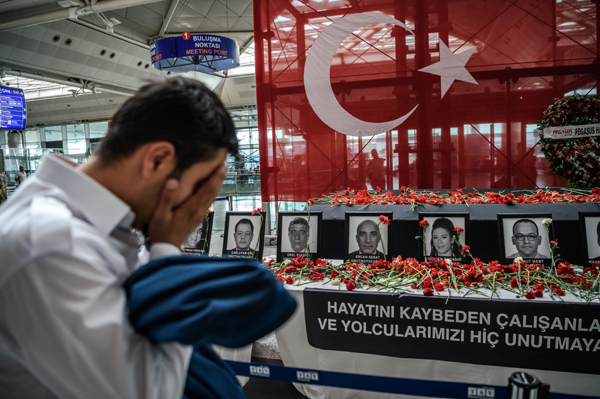 An airport employee mourns for his collegues as he looks at the pictures of killed airport.
Photo: Getty Images

The Dhaka attack on Friday was on foreigners and points to a shift from IS to the territories beyond Mideast. This attack was not executed by some bearded individuals but by clean shaved young Bangladeshis who posted pictures of the dead bodies on social media instantly. This is 21st century barbarism, all in the name of a religion that bears no resemblance with this madness or viciousness. 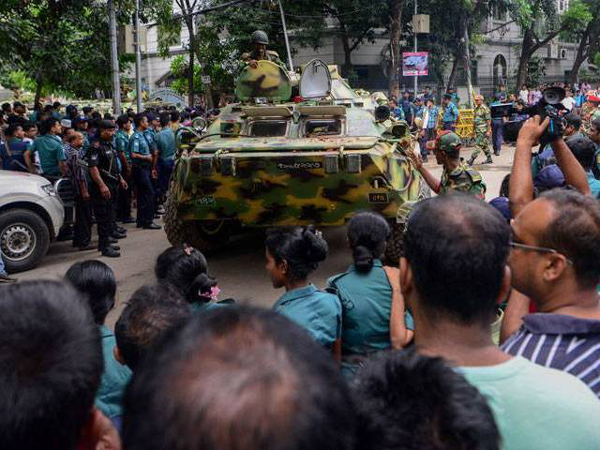 A Bangladeshi armoured military tank makes its way past journalists, onlookers and police near an upscale restaurant in Dhaka on July 2, 2016, following a bloody siege by armed attackers that began on July 1.
Photo: AFP 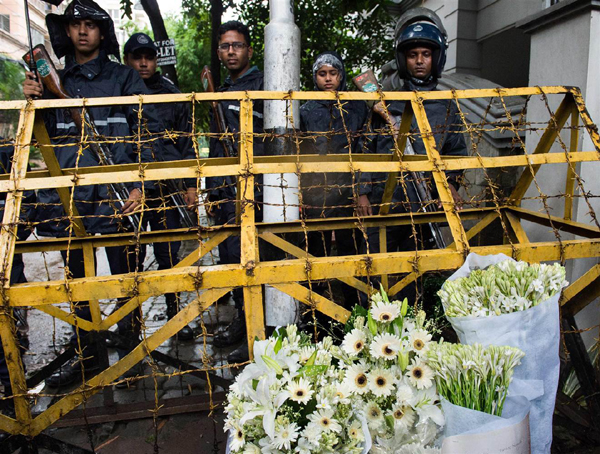 Wellwishers leave flowers on a road block leading to an upscale cafe that was the site of a bloody siege in Dhaka.
Photo: Roberto Schmidt

On Sunday’s Baghdad attack, 165 have already been confirmed dead and there the main target was Shias. The lists of victims included entire families, comprising a father and his sons and a mother with her daughters – wiping out entire families. 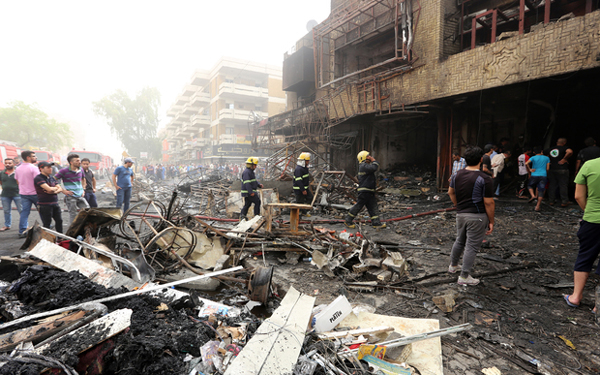 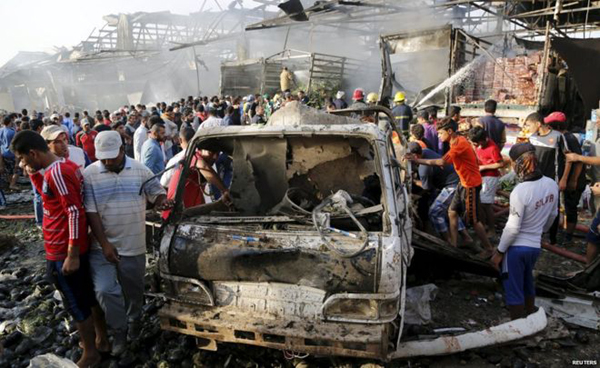 The truck bomb targeted one of the busiest markets in Baghdad.
Photo: Reuters 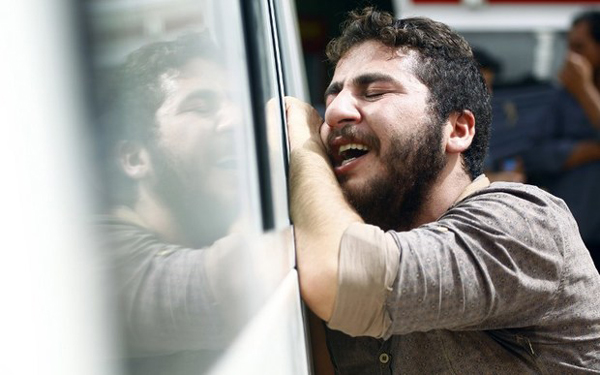 An Iraqi man mourns during the funeral procession for victims of the Karrrada bombing. Photo: AFP

Monday saw deadly suicide attacks in the Saudi cities of Medina, Jeddah and Qatif. Where on one hand these attacks fortunately inflicted a much smaller loss of life, on the other this coordinated campaign of attacks was enormously symbolic and hopefully a wakeup call for the entire Muslim world. IS in this instance were on the threshold of the two holiest sites for Muslims of all denominations. It was not very far from the burial place of the most revered personage about whom the Almighty (swt) proclaimed that he was sent as a mercy to the worlds. 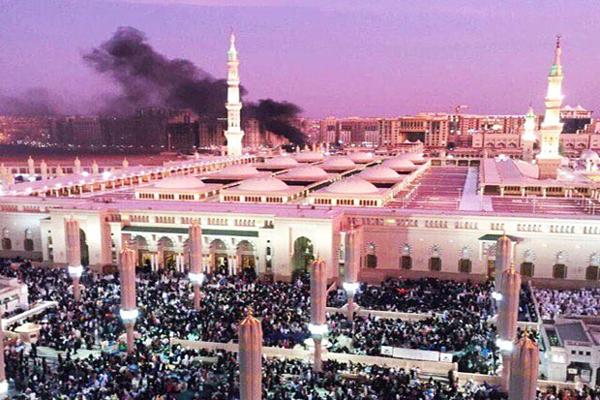 Clouds of smoke from the bomb blast in Medina, Saudi Arabia
Photo: sindonews.com

The emblematic green dome and the minarets of the Holy Prophet’s (PBUH) mosque were engulfed in smoke. What this smoke actually reflected is the despair and anguish of the entire Muslim world.

There are plenty of verses in the Holy Quran that set out principles of absolute peace and justice. Verse 107 in chapter six, Al-Anaam, of the Holy Quran should be a directive for those who believe in forcefully imposing their own will upon others. This verse explains that the duty of a prophet is confined to what is revealed to him by God; it is not his business to compel others. The verse further explains that no prophet is responsible for the actions of other people.

Keeping this verse in mind, how can a Muslim force others in the name of religion?

Pakistan hasn’t reported cases of IS involvement in the country as yet, but the mentality of quite a few people seems to be backing IS’ disturbing ideology. Killing in the name of faith is common practice in Pakistan, therefore, putting aside the probability of IS gaining a stronghold there seems far-fetched.

Evil, unless nipped in the bud, has the tendency to completely destroy societies. Treating a tumour at an early stage is more likely to bear success than attacking the cancerous cells at the metastatic stage, where it has already spread to another body organ.

Nearly every integral organ of our society is already at severe risk, if not engulfed completely, by the cancer of extremism. The solution to this menace may not be simple but, as the first and most vital step, it requires an unprecedented political resolve where the government must wholeheartedly ban all extremist organisations, keeping in view the principles of true Islamic equity and justice. This requires a collective will and complete transparency. Somebody preaching hate against anyone who is “different” should be taken to task without delay.

An attack against Ahmadis, Shias, Hindus, Christians or any other community should not be taken lightly as it is an attack on all of us, directly and indirectly. In Egalitarian societies, a racial slur leads to punitive action; therefore killings caused by xenophobia are extremely rare in such societies. It does not, however, imply that people in the West do not nurture hate in their hearts for others. It simply means that the justice system prevents such feelings from going unchecked.

In Islamic countries, unfortunately, justice and equality are the rarest of commodities, even though Islam’s holy book elaborates on equality and justice more than any other holy scripture.

In Pakistan for example, the silent majority who finds it easier to turn a blind eye when the victims are from another community, cannot be seen dissimilar to the perpetrators at many levels. Our past and present bear witness that today’s spectator could become tomorrow’s spectacle. The silent majority should do more than just sitting on the fence.

Our masses are becoming desensitised at best and haters at worst. There are several online videos where preachers of hate are openly inciting hatred against a community, but most of these hatemongers go scot-free. The result is obvious; an increasing number of young minds are being drawn towards extremism.

Social media has done more harm than good in playing into the hands of these preachers of hate. Yes, there are some decent voices out there, but one cannot deny the ever growing hatemongering through online mediums.

Pakistan knows all too well the ills of extremism, but it seriously risks facing further bloodshed at an unprecedented scale unless every hate preacher in Pakistan is taken to task. The National Action Plan has arguably been non-existent when it comes to monitoring activities of outfits rallying against certain people. Everything is at stake for the future generations of Pakistan. It is a ticking time bomb and we all know it.

He punched a Bangladeshi man and got arrested - would Pakistan have done the same for its minorties?

Allahu Akbar goes viral for all the wrong reasons

Stop celebrating Sadiq Khan’s victory, Pakistan, you have no right to celebrate