Will Andrew Luck be able to deliver the Lombardi Trophy to the city of Indianapolis? 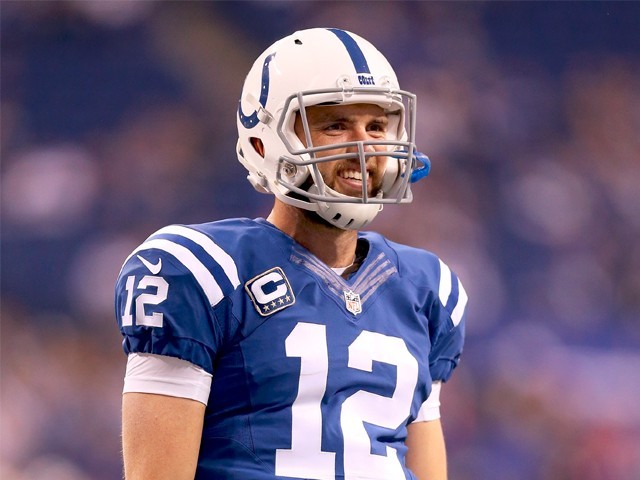 Is Luck capable enough to lead the Colts to the chosen land? PHOTO: REUTERS

One of the biggest, if not the biggest deal, in NFL history has been put to paper. Indianapolis Colts quarterback Andrew Luck has signed a gargantuan deal worth $123 million over the course of the next five years, which will help him stay put in Indianapolis until at least 2021. The bigger and more perplexing question which arises is: Is Luck capable enough to lead the Colts to the chosen land?

After being selected first overall in the 2012 draft, Andrew Luck was touted as the quintessential future of a Colts franchise that was reeling from the after effects of a first season without legendary quarterback Peyton Manning. The Colts had gone 2-14 in 2011, a season in which Manning did not play due to four neck surgeries, and scooped up Luck in the forthcoming draft. In his rookie year, Luck was always compared to his counterpart Robert Griffin III of the Washington Redskins. Although RGIII took home the ‘Rookie of the Year’ honours, Luck was not far behind.

Since his appearance on the NFL stage, Luck has done moderately well. He has taken the Colts to the playoffs each year, barring 2015, even leading them to the AFC Championship Game in 2014. He has already played in six playoff games, winning three of them, in his first four years as a Colt, something even the great Colt Peyton Manning didn’t achieve.

With all of the past history set aside, Andrew Luck has a huge responsibility on his shoulders: to deliver the Lombardi Trophy to the city of Indianapolis. He does have a good receiving core at the moment with the likes of TY Hilton and Donte Moncrief to go along with the likes of running backs like Frank Gore and Robert Turbin. The crux of all the issues are at the offensive line as there are no revered centres, nose tackles and guards, although Jim Irsay tried to lessen these issues by drafting a centre in the draft. It was this inept offensive line which was responsible for Luck’s lacerated kidneys and bruised ribs when he suffered a monumental 15 sacks in seven games causing him to miss the last part of last season.

To put into perspective with the rest of the league, the Colts only recorded 22 sacks during the entire 2015 campaign, good enough for 22nd in the league, but returned 17 interceptions for touchdowns, good for seventh best in the league. The Colts need to shore up this back line, if they are to allow Andrew Luck any chance to shine.

Another important concern for Luck and Colts are the mind boggling number of interceptions Luck has thrown in his first four years. Despite only playing seven games last year Luck threw 15 interceptions, which are a horrendously bad number of picks. He should try to take much greater care of the football and would be advised to not try and find his receivers on all occasions but should be content with handing the ball off to his tight ends.

Quarterback Andrew Luck #12 of the Indianapolis Colts runs with the ball.
Photo: Reuters

Finally, Andrew Luck’s completion percentage has been abysmal to say the least thus far in his burgeoning NFL career. It has yet to reach even the plateau of the 65% mark. Luck has been erratic, wildly inconsistent and immune to folding up when the pressure is on: in the fourth quarter with games on the line. It seems that Luck seems to close up shop when the pressure starts to increase exponentially and instead of providing a calming and soothing environment for his team, he turns out to be a deterrent for them.

The schedule for the Colts isn’t one of the most difficult; after all they play in the so-called worst division of the league. He will be tested to the core in his second match up against the Super Bowl winning vaunted defence of the Broncos in Denver as well as during matches with the Packers (at Lambeau Field), the Steelers (at home) and the Jets (at MetLife Stadium). If the defence and offense click at the right moments, I can see this team going 12-4 or even 13-3 at best.

With such high expectations and an owner not known for his patience, Andrew Luck is in muddled water to say the least. Luck has set the bar ever so high for himself that each and every single mistake he makes will be dissected to its core and the ramifications might be difficult for him swallow. The quarterback needs to pull up his socks, go out and do what he has done best, and show the world why the Colts placed their trust in him in 2012. Barring all of the above, Luck might have a rough journey ahead.