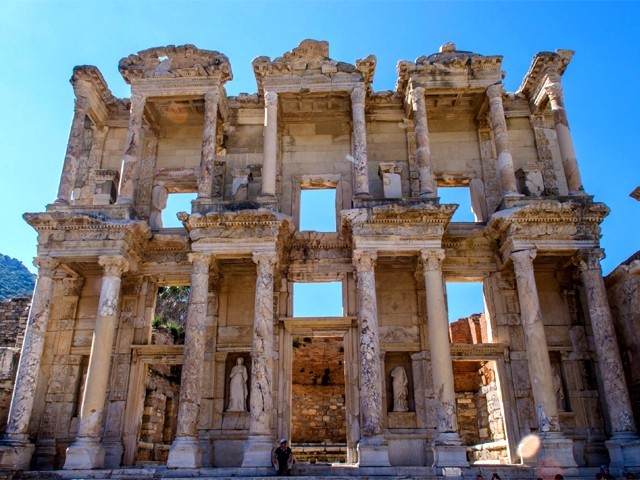 Library of Celsus - a small alley from the library’s courtyard opens up to the city’s marketplace, the commercial agora, and to the Great Theatre. Archaeologists believe that the theatre was first built in the Hellenistic Period by King of Thrace in the third century BC. During the Roman Period, it was then expanded to seat 25,000 people. PHOTO:AWAIS BIN SAEED

Rome has existed as far back as the eighth century. The Roman Empire covered most of Europe, parts of North Africa, Asia and the Middle East. During its peak, this empire rivalled existing empires. Due to the expansion the Roman Empire, new cities evolved and flourished.

The city of Ephesus was one of the major commerce centres that strengthened the Roman foothold in Asia. Ephesus existed since before the Bronze Age and had lived through the Greek, Hellenistic, Roman and Ottoman periods. But it was during the Roman period that this harbour city progressed, and ultimately became the second largest city in the empire after Rome.

Today, marble-stoned ruins of Ephesus can be found in the province of Izmir, near the city of Selçuk (present day Turkey). Its ancient heritage, combined with its location near the historical Selçuk and Kuşadası resorts, has become a busy tourist destination for all those who desire a refreshing, yet thrilling retreat. Since I was looking for just that, we flew to Izmir, rented a car and set out to explore the city.

The region holds many sites of Islamic and Christian significance. In the hilly outskirts of Ephesus is the Cave of Seven Sleepers which can be accessed through a delightful horse cart ride from the entrance of the archaeological site. Turkish tradition suggests that this is the cave that was mentioned in the story of Al-Kahf (the cave) in the Holy Quran. 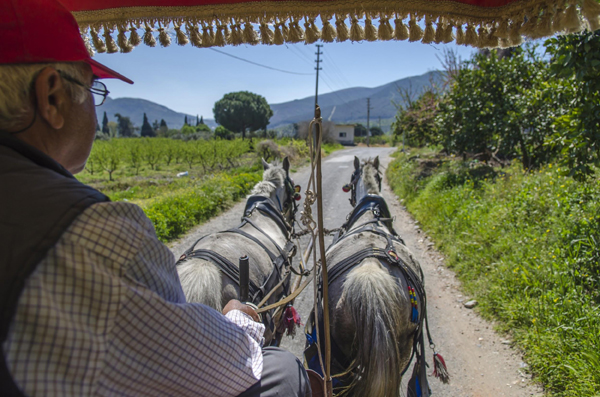 Riding to the Cave of Seven Sleepers through Turkish country-side

We were told that during the ruthless pre-Christianity reign of the Roman Emperor Decius, seven young men from the city of Ephesus accepted the call of Jesus (pbuh) and took refuge in the cave to avoid persecution. There they miraculously slept for over three centuries and woke up during the time of Emperor Theodosius II. During this time, Christianity was the most practiced religion. The young men, realising what had taken place, rushed back to the cave where they finally passed away. Although we were not allowed to go inside, locals believe that there are seven graves inside affirming their tradition. Over the years, a temple was built there, which now stands in ruins. 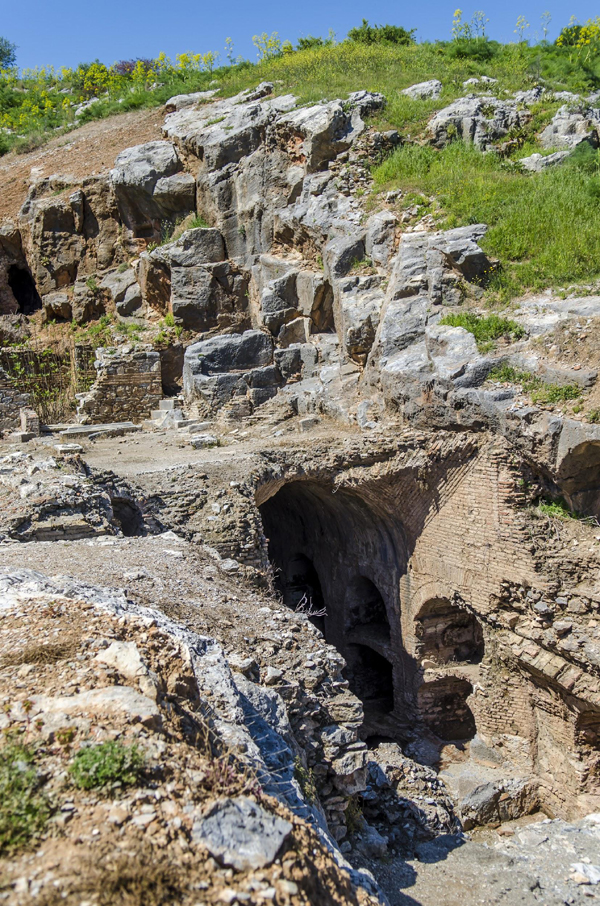 We entered Ephesus from its southern gate, which opens to Agora on one side and Odeion on the other. Both these places were primarily used for political gatherings and government meetings. 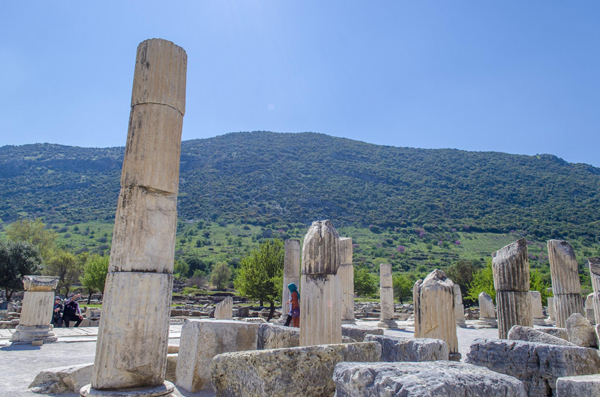 Agora at the entrance for public gatherings 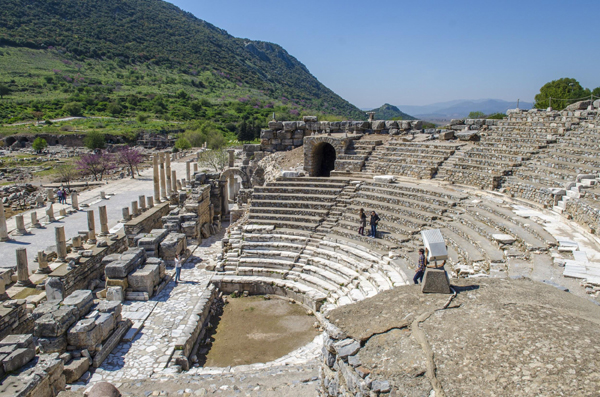 Ephesus also had a prytaneum (a commonality seen in cities with Greek origins) adjacent to the state buildings where the city’s sacred fire was kept alight as a sign of peace. 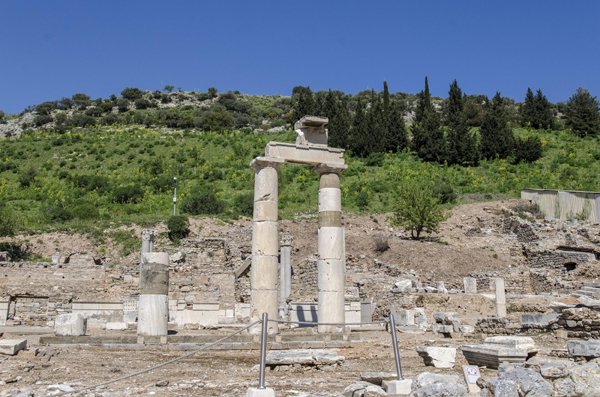 The prytaneum where the sacred fire was kept alight continuously

A few steps downhill is the Curetes Street, what may have been the city’s main boulevard. The street passes through ruins of hillside housing quarters, public baths and the Temple of Hadrian before ending at the Library of Celsus. 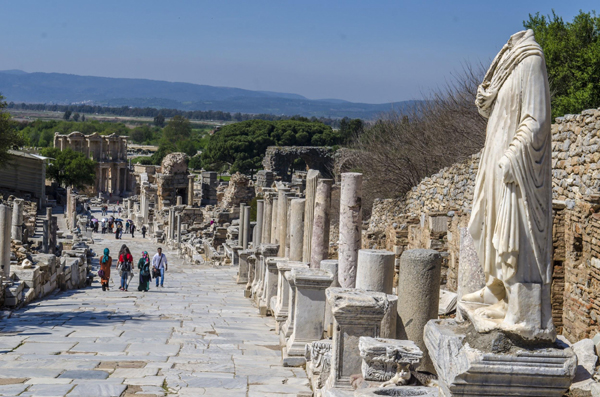 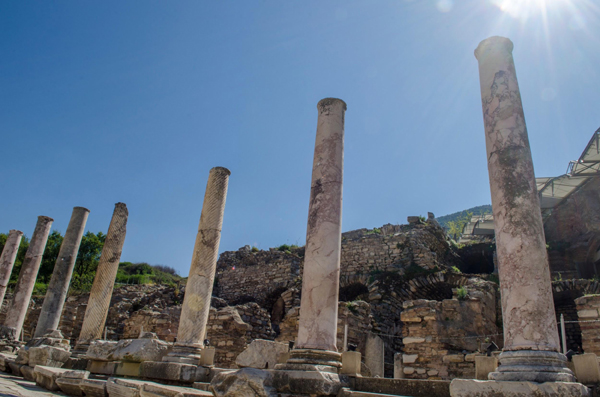 The temple dates back to early Roman period and was built to honour one of the Five Good Emperors in Roman history – Emperor Hadrian (117 – 138 AD). 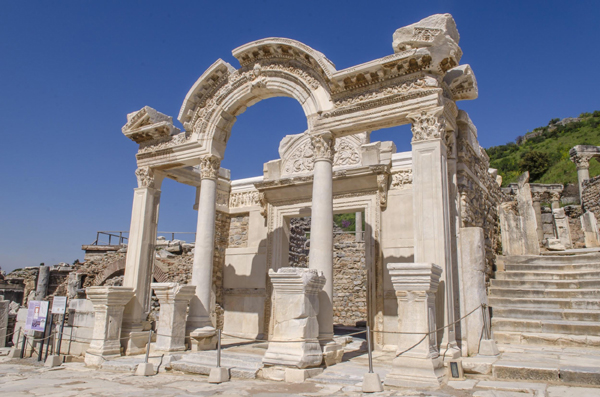 The Library of Celsus, at the end of the street, was built in 117 AD. This was initially the tomb of a Roman Governor of Asia, Celsus Polemaeanus. Later it was used to keep holy manuscripts and scrolls. At one point, the library is said to have kept over 12,000 scrolls making it the third richest library in ancient times. 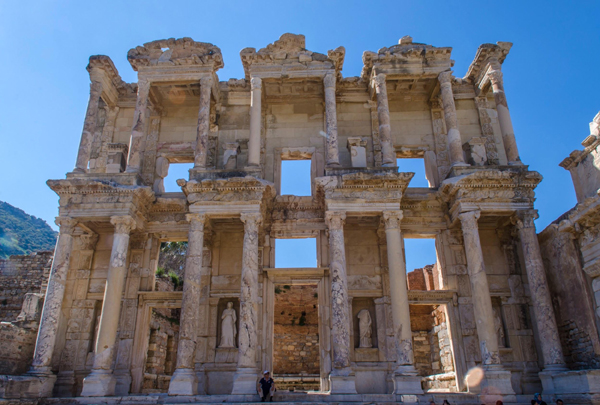 A small alley from the library’s courtyard opens up to the city’s marketplace, the commercial agora, and to the Great Theatre. Archaeologists believe that the theatre was first built in the Hellenistic Period by King of Thrace in the third century BC. During the Roman Period, it was expanded to seat 25,000 people. 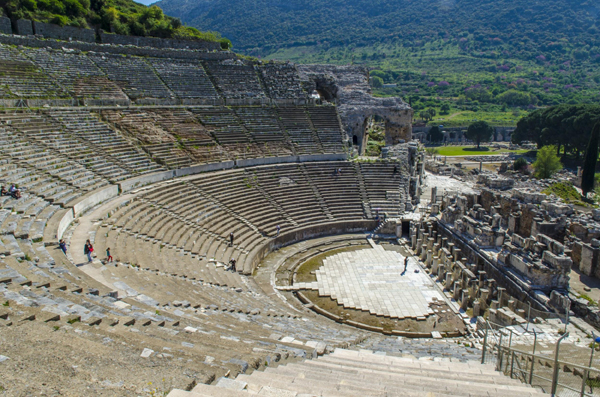 A few kilometres south of Ephesus Archaeological Site is a modest shrine known as House of Virgin Mary. According to the Christian traditions, after Jesus (PBUH) ascended to heaven, one of his disciples, St John, brought his mother, Mary to a peaceful sanctuary outside Ephesus. It is believed that this is the house where she spent her last days. The house is open to visits and is considered holy by Catholics and Muslims alike. It is advisable to dress modestly and maintain silence while visiting. 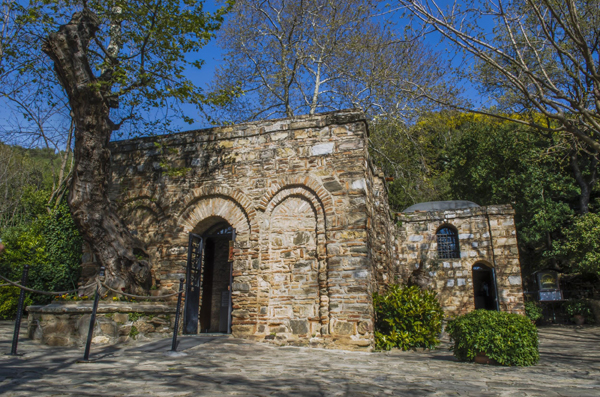 We walked around the house for some time, overwhelmed by the feeling of being at Mary’s residence. Was this really the place where she spent her last days? No one will ever know for certain. Just like many other ancient secrets, the authenticity of this claim will also remain under the curtain of time.

St John established a worship place at Ayasuluk hill, located at some distance from the House of Virgin Mary. This is where John is thought to have written his Gospel and the site became his final resting place. Five centuries later, Roman Emperor Justinian (527 – 565 AD) built a giant church here, known as the Basilica of St John, which became the second largest church in the Roman Empire. We did not find many tourists at the impressive ruins of what had once been a remarkable structure. 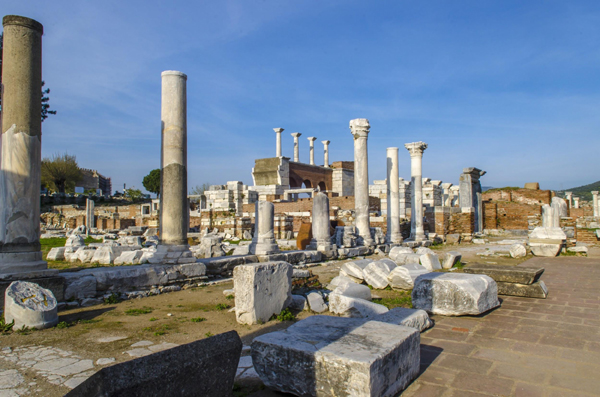 Basilica of St. John on Ayasuluk Hill in Selçuk, Turkey 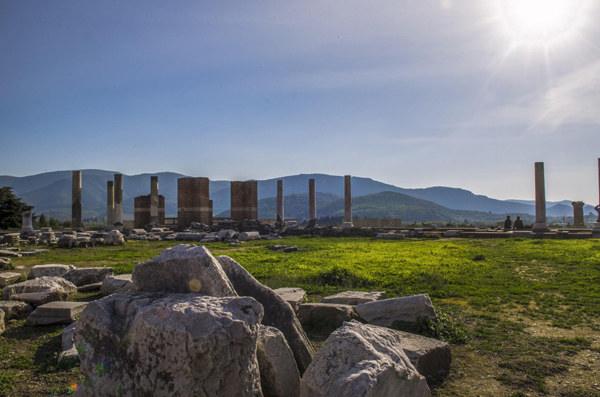 Ruins of Basilica of St. John on Ayasuluk Hill in Selçuk, Turkey

The Ayasuluk Fortress stamps its authority on top a hill. The fortress was originally built by the Byzantines, but was taken by Seljuk Turks in 1090 AD. The Byzantines took it back after seven years and retained control for next four centuries. Finally it was conquered by Seljuks after whom the settlement came to be known as Selçuk. 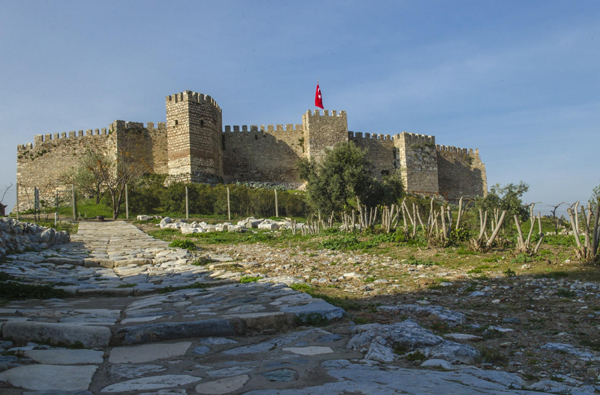 Seljuks built a mosque at the foot of Ayasuluk Hill in 1375 AD, which is known as Isa Bey Mosque, named after their ruler at the time. It was during the time when Ephesus was reduced to a small village and finally abandoned in the 16th century AD – mainly because the harbour silted up and impacted the livelihood of its inhabitants. 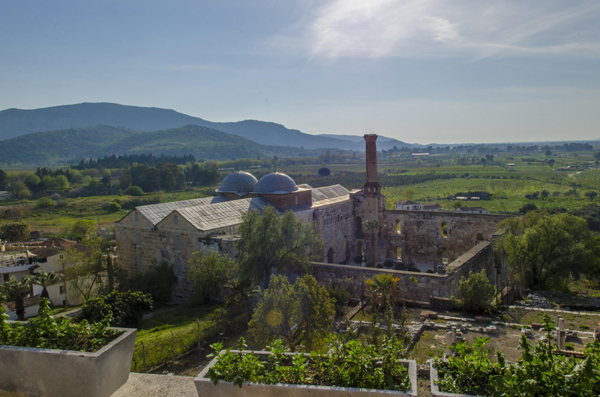 With the sun setting behind the mountains, giving rise to the shadows of an ancient world, we headed back to our hotel in Kuşadası to embrace the magical sunset over the Aegean Sea. 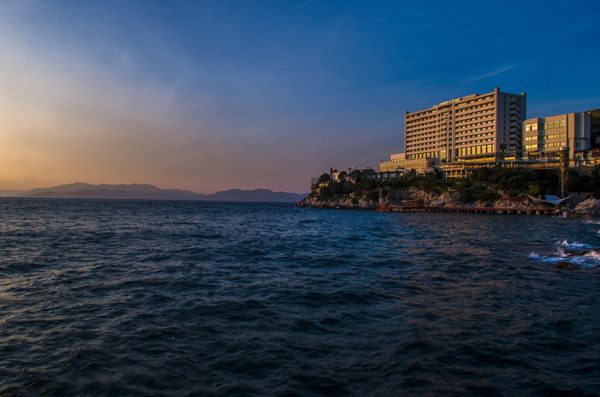 Aegean Sea at Kuşadası about 18km southwest of Ephesus 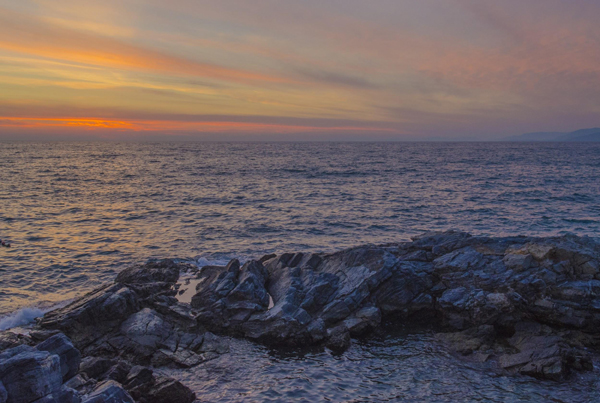 Sunset over the Aegean Sea at Kuşadası

The author is an electrical engineer by profession who likes adventure and photography. He tweets as @awaisbinsaeed (twitter.com/awaisbinsaeed) and his Facebook page is Awais B. Saeed Photography (www.facebook.com/Awais-B-Saeed-Photography-1562054650699043/)