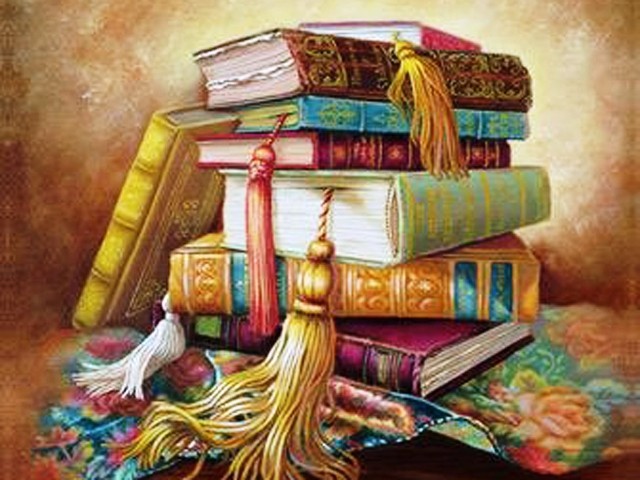 The most pressing need of our time is to rehabilitate our intellectual traditions into the mainstream.

It sometimes seems like a lost cause – our backwardness as a nation, our never ending cynicism and our victimisation at the hands of the West. What is it that fans all the violence in our societies?

Perhaps we never bother to think about that. The only instincts that are left in us are animal.

And it’s not only us. It is also the Arabs, the Central Asians, the Persians and others who are scattered across the face of the earth – all, victims of stereotypes and suffering from a chronic identity crisis. It is us, the Muslims, the peoples of the once glorious Islamic civilisation.

No matter how much we try to ignore it, the truth is that we are the victims. All modern conflicts, all the incessant violence and all the fancy and novel terminologies like fundamentalism, terrorism, radicalism etcetera trace back to us. And the blame is ours to take as well.

Do we know our problems?

Violence, radicalism, and suppression of liberty have increasingly permeated into the Islamic nations, and there is no denying of this fact.

Religious fundamentalism that emanates from our societies continues to threaten not only the liberty of our benefactor, the United States, it threatens our own liberty before that.

The threat from this religious fundamentalism is redoubled as a result of our failure to apprehend the real convict – hatred that stems from intellectual poverty. This religious extremism has grown as a result of the ‘intellectual irrelevance’ that has steadily overshadowed our nation in particular and the Muslim world in general. I believe that this is the most basic and potent threat to our society and we must make an effort to grasp this issue and address it accordingly.

The prevailing view towards international terrorism and religious fundamentalism is highly misguided, both in terms of its intellectual grounding and the resultant policy outcomes. The failure to understand modern conflicts in the right historical and intellectual context is the most inimical threat to our prosperity as a nation. I say so because this misguided attitude not only prevents us from acting to curb violence but it also restricts our ability to progress as a society.

We must understand that our problems are intellectual and not social, cultural or sociological. We hang in an intellectual limbo. Our civilisation is intellectually misplaced in time. It is like a Roman gladiator fighting in the age of nuclear weapons, and that too with his sword and shield.

Ever since the West overtook the Muslim civilization in its intellectual pursuits, the peoples of Islamic nations have not been able to catch up with the pace of the modern world. As a result of this, Muslim scholarship became irrelevant to the modern mainstream scholarship and thereafter failed to make any significant contribution to the modern world. This has given way to feelings of victimisation and weakness and this frustration now often turns into violence and hatred.

In countries like Pakistan, which is a foremost example of a largely Muslim society engulfed in violence and confusion, academics and thinkers are stuck in an archaic idiom. Our culture, literature and scholarship are cut off from modern learning, research tools and methodologies. There are no concordances, indices or other such modern tools of scholarship to study the volumes of classical studies, literature and poetry of this region – our legacy is as good as a useless relic. We try to copy MIT and stress the need for ‘IT,’ but we fail to understand that it is our legacy that has the remedy to our woes and not the ubiquitous ‘IT.’ Our naivety is laughable, as we are oblivious to the fact that the library of Harvard University has more resources on Ghalib than Lahore University of Management Sciences.

Because of this very attitude, the contribution of our society to the modern world in any intellectual field, be it science, literature or philosophy has come down to a naught. There is, in short, dearth of an intellectual framework in the Muslim world.

Until and unless the collective thinking, culture, values and the literature of our society is brought into a definitive framework, it is impossible for us to reconcile with the modern world. The most pressing need of our time, therefore, is to rehabilitate our intellectual traditions into the mainstream so that it becomes a part of the thought process of our new generations. If a prompt action in this regard is not taken, their irrelevance and confusion will keep turning into chaos and turmoil.

Consider for example the works of literature that have for centuries enlightened the Muslim civilisation. Some of the most important sources of humanism in Muslim societies are the works of Sufi poets – literature that has historically worked for the social uplifting of Muslim societies in the past. This legacy is becoming obscure with the passage of time and there is a need to rehabilitate it into the mainstream modern intellectual framework.

Intellectual legacy and the modern world

Re-reading our intellectual legacy and reconciling it with the modern world is the only way forward for Muslim societies and the only remedy to the largely held feeling of victimisation at the hands of the Western civilisation. Merely increasing our education budget is not the solution, nor is investment in IT. The solution to all our problems is a reform in our education system and more so, a reformation of our collective thinking.

We must also understand that on part of the policy makers, a failure to understand this issue exacerbates the problem rather than addressing it. Suppression inevitably fuels anger and has all the tendencies to be counterproductive. The solution therefore is an intellectual reform. Governments cannot ensure liberty and the peaceful existence of free societies unless the intellectual disparities of the social system are set straight.