Pakistan’s mullahpoly: My way or the highway 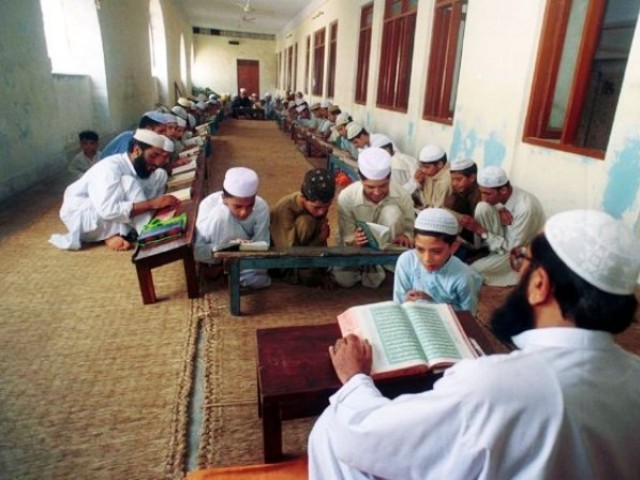 Why do we have to declare another faith null and void?

In Pakistan, it seems as though religious clerics have acquired a copyright over Islam, and are exercising this right in its full capacity, including its publication, adaptation, distribution and interpretation.

I can safely say that most of us believe that Islam is a religion for all humanity and everyone has a right to learn and practice it. However, the custodians of Islam in this country like to follow and impose their self proclaimed rule.

If “Islam Incorporated” was a company than religious fanatics would be the management. The creditors (Islamic sects) loan its goods and services; shareholders (madrassah owners) invest their capital (madarsah education) and the employees (jihadi brigade) who contribute their labour to achieve and safeguard vested interests

My concern is why does the government not allow all people to practice and preach their religion? Why do some laws declare some faiths null and void?  We all know that Islam is the fastest growing religion and can never be erased from the face of earth but we are not ready to believe in Allah who has taken sole responsibility to save the book and religion till the end.

Zulfiqar Ali Bhutto appeared on the political scene with his political slogan of:

“Islam is our religion, democracy is our politics, socialism is our economics.”

He won the elections but over the years, the notions of democracy and socialism faded into the background and Islam came to the forefront, especially when Bhutto proclaimed Friday as the weekly holiday and declared Ahmadis as non-Muslims. This was the beginning of the nightmare of religious intolerance.

The nightmare worsened during the era of Ziaul-haq who handed religion over to illiterate mullahs and tried to Islamise all aspects of civil, political and social life from schools and hospitals to government offices. In consultation with the then religious scholars, he introduced law which resulted in the undermining of women’s rights.

The introduction of blasphemy law worked as an insult to the minorities’ injuries which led to hundreds of innocent people being killed and jailed on mere allegations.

These draconian laws are still thriving in Pakistani society, and “the privileged” majority think the right to declare anyone kafir or even kill in the name of religion just because they are allowed to believe that they are the true followers.

Different brigades of bearded men wearing black, green, white, brown turbans belong to different sects and sub-sects. They are more devoted to their religious doctrine than Islam. They claim to be a brotherhood but if you talk to them separately they don’t spare a second to “prove” another sect “non-Muslim”.

Pakistan’s religious cartel has been agreed on this: the minimum common agenda is that all Ahmadis are non-Muslims and their entry into the religious market might reduce their profit share in the cake. Thus, religious conglomerates of Pakistan have engineered separate laws to bar new players and (even after declaring them non-Muslims) have banned  them from practicing their version of Islam, let alone preaching.

Pakistan is the only country where dominating religious scholars have established such a “mullahpoly” that doesn’t allow competitors to even greet each other in an Islamic way or recite kalmah. Our traditional scholars are unaware of their competitor’s guerilla marketing strategy that relies on time, energy and imagination rather than a big marketing budget.

In his opening speech to the constituent assembly, Quaid-e-Azam said:

But today’s Islamic Republic of Pakistan is an entirely different country than the one Jinnah had envisaged for us. He envisioned Pakistan as a moderate, progressive nation where minorities would be allowed to preach and practice their religion freely. Regardless of whatever logic our scholars present, they cannot justify curtailing religious freedom since that is a clear violation of Pakistan’s constitution and Jinnah’s thoughts. We are certainly living in the geographical location that Jinnah fought and struggled for, but in terms of vision and policy we are living in a chaotic mess with no improvement in future.