What comes after the Istanbul Airport attack? 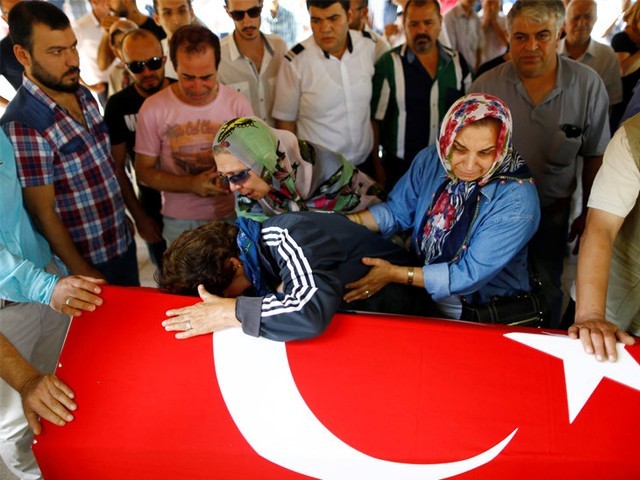 On Tuesday night, just as millions of Muslims here were breaking their Ramazan fasts, three terrorists attacked the city’s busy airport. They fired randomly at passengers with automatic weapons before blowing themselves up. They killed 41 innocent people, most of them Muslims, supposedly in the name of Islam.

This country was much more peaceful a year ago. It was only last summer that a two-year-old peace process between the government and the PKK fell apart. Meanwhile, the Islamic State, which initially benefited from Turkey’s lax control of the Syrian border, began to carry its violence inside Turkey. Islamic State suicide bombers first aimed at secular Kurds, then Western tourists and finally random people at the airport.

Since last summer, the Islamic State has been condemning Ankara as the capital of an “apostate regime” that allies itself with “Crusaders.” The group’s Turkish-language magazine proclaimed:

“O Istanbul, you have allowed disbelief in your avenues. You have filled your streets with sins, but surely you will be conquered.”

The jihadist group and Turkey have been at war since last summer, when American planes began taking off from an air base in Turkey on their missions to bomb Islamic State targets. Since January, the conflict has escalated: The Islamic State began shelling the border town of Kilis, and the Turkish Army retaliated. More recently, Turkey supported an operation by a rebel group called the Syrian Democratic Forces to wrest the town of Manbij in northern Syria from the Islamic State’s grasp. Turkey also supports Islamist rebels in Syria that oppose the Islamic State.

No wonder a Turkish intelligence report warned in early June that the Islamic State would soon seek revenge. The group can hit soft targets inside Turkey, the report added, specifically mentioning Istanbul’s airport. Sources say that thanks to this warning, security had been heightened at the airport, perhaps preventing more deaths.

Where will we go from here? The reaction from the government is sure to be severe. Raids on Islamic State cells in Turkey will most likely increase. So will airport security. Intelligence efforts will be stepped up and the border monitored more closely. But security and intelligence measures alone won’t bring an end to the bloodshed.

Turkey has become so vulnerable lately because it is polarised internally and isolated externally. This is not the result of a “global conspiracy,” as President Recep Tayyip Erdogan’s propaganda machine keeps saying. It is the result of the president’s rigid, divisive and combative policies. He has picked fights with our neighbours and tried to crush his opponents at home.

Now his government is finally taking steps to repair some of the damage. The start of reconciliation with both Israel and Russia, which came as happy news just before the airport attack, are steps in the right direction. A pledge by Prime Minister Binali Yildirim seems promising:

But Turkey’s government needs fewer enemies inside Turkey as well. That would entail a reversal of the authoritarian tactics that Mr Erdogan has pursued for five years — suffocating the press, demonising opponents, taming the judiciary and imposing religious conservatism.

The Turkish government also has to solve a strategic problem: Its “war on terror” has two conflicting objectives. It fights both the Islamic State and Kurdish militants, but the Kurds are the best force against the jihadists on the other side of the Syrian border. That not only puts Turkey sometimes at odds with its Western allies, but it also hurts Turkey’s chances of ending terrorism.

The government needs to decide with which of these two terrorist forces it can negotiate. The Islamic State is not open to reason or diplomacy; the PKK is, as Mr Erdogan’s own previous peace efforts demonstrated. Turkey can return to talks with the Kurds. This would decrease the number of PKK attacks and greatly improve security. It would also allow for a more effective effort against the Islamic State.

For their part, Turkey’s Western allies, especially the United States, would be wise to encourage such a rapprochement between Ankara and the PKK Turkey needs all the friends it can get.

Mustafa Akyol is the author of “Islam Without Extremes: A Muslim Case for Liberty.”

Is it time to celebrate democracy in Turkey?