Why is Karachi virtually paralysed every time it is ‘blessed’ with rains? 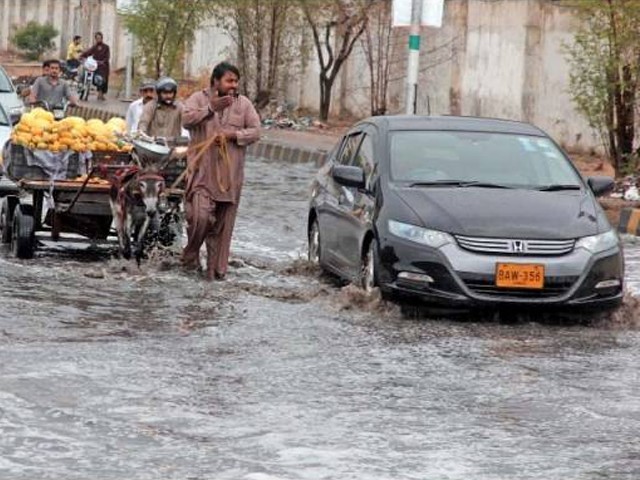 Several roads in the city flooded with rainwater as nullahs got choked. PHOTO: ATHAR KHAN/EXPRESS

Go to any major city on the planet and you’ll find that heavy rains do not affect normal life in any way. Drive from Genting Mountain to Kuala Lumpur in Malaysia in pouring rain (so heavy that you can’t see more than 10 feet ahead of you). No problem, business as usual. Roads don’t get damaged, the water doesn’t collect on the roads and in a few minutes the streets are miraculously empty of water.

No power breakdowns either. No need to buy and maintain expensive generators to produce electricity whenever it drizzles because there are no power outages. The same is the case in Britain, where it rains almost every day.

So why is Karachi virtually paralysed every time it is ‘blessed’ with rains?

I remember a time when it was declared as the cleanest city in the world (this was in 1959, during Ayub Khan’s reign). Shortly after the Peoples’ Party came to power in 1972, Karachi was designated as the dirtiest city on the planet, and it continues to be so even today.

Just think of what happened the other day, when after four days of gruelling heat (at times 40°C), Karachi received about an inch of rain (it was not more than a drizzle, really). Immediately, the electricity disappeared and our problems began. Without electricity, you can’t pump water to the overhead tank, so you had to lower buckets manually and fill them with water from the underground tank. Telephones stopped working, and you were without the internet. Servants rushed home to remove water from their homes (they wouldn’t be able to come back for a couple of days at least). It was just like living in the Stone Age.

Driving became a nightmare. The roads were flooded and you had to drive very carefully to avoid ponds and ditches which had formed. A few years ago, a lady politician had lost her children due to drowning when her car was swept into a storm water drain. There were live electric wires on the flooded roads, so you had to make sure you would step on dry ground after parking your car, to avoid being electrocuted like the four men who died that day.

And now, some facts: when the electric utility (KESC at the time) was privatised, we had hoped that now we would be free of power outages during heat waves and rains. But even though the company (now called KE) made a massive profit of Rs22 billion in the first nine months of the current year, we find it has not improved its performance at all.

And then there is the garbage everywhere. Even in Lahore, they have a solid waste management program, with garbage being recycled and where the residents are not in danger of contracting deadly diseases from stinking piles of waste. But then, Lahore is governed by people who were born there, and who care for their city. Karachi, however, is managed by outsiders, those who were born elsewhere, who have no love for the place, and whose only concern is to amass as much wealth from its taxes before they flee the country.

So, naturally, they are not at all bothered if the people of Karachi are always being tortured, even though they contribute a hefty chunk to the Sindh (non)government. In fact, some analysts have reported that as much as 85 per cent to 96 per cent of the province’s budget is recovered from Karachi. So the powers that be will never want to change the situation, they will naturally want to spend all the funds on themselves, rather than allow the city government to spend it on improving the s(t)inking megalopolis called Karachi.

The garbage will continue to remain on the streets and in the storm water drains, the roads will therefore be flooded during rains and mosquitoes will breed in the pools of dirty water which will not dry for months, unfortunate people will die of malaria, while those who looted Karachi will lead lavish lives in foreign lands without losing any sleep.

And you know what?

Karachi will always suffer as long as the locals are not given funds to manage the city. My heart bleeds for you, my beloved city!