He told his parents he was gay. They started grieving and looking for a “cure” 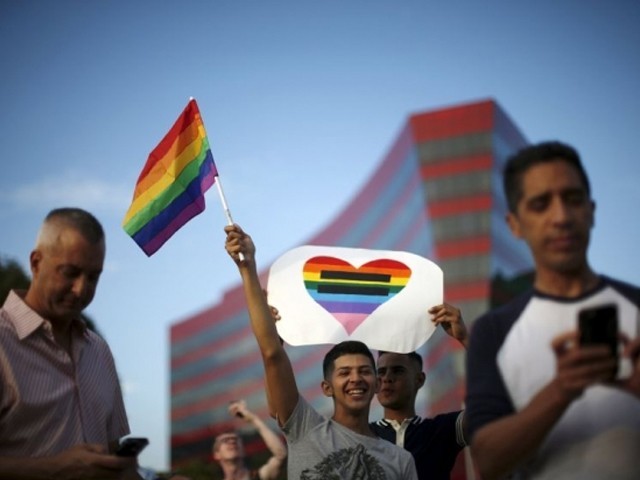 A US-based Muslim group has hit out at those seeking to criminalise homosexuality. PHOTO: REUTERS

“I fell a-weeping, and I cried,

‘Sweet youth, Tell me why, sad and sighing,

Thou dost rove These pleasant realms?

I pray thee speak me sooth What is thy name?’

Then straight the first did turn himself to me And cried,

‘He lieth, for his name is Shame,

But I am Love, and I was wont to be Alone in this fair garden,

Till he came Unasked by night;

I am true Love, I fill The hearts of boy and girl with mutual flame.’

Then sighing, said the other,

‘Have thy will, I am the love that dare not speak its name.’”

Back in 2004, I was part of an awareness campaign run by the Pakistan Association for Mental Health in Karachi, Pakistan. One of our camps was held in the Saeedabad locality of Baldia Town. We saw over 500 people over the course of the day some of whom agreed to follow up at our mental health clinic.

Among the people I saw that day was a 16-year-old boy who was accompanied by his father. The boy explained that he had never experienced physical attraction towards girls and had throughout the course of his puberty and teenage been romantically and sexually inclined towards boys. He was not disturbed by these feelings but was concerned about his parents both of whom he had confided in a few weeks ago.

His mother had reacted by going into a state he described as grieving and his father had seemed worried and kept asking him if he was sure he had never felt any sexual longings towards women.

He was curious about being able to change the way he felt and his father, though he appeared resigned from the outset, was also interested in knowing if marriage was a possible “solution”. I explained to both of them that homosexuality was something that scientific research increasingly indicated was an inborn disposition and that it was not, according to Western medicine, considered an illness or condition requiring medical intervention.

I counselled them against marriage and told them it would be emotionally disastrous for both partners. The meeting concluded with the father saying that he did not want his son to be “made fun of” and that he would prepare to “send him abroad” after he finished his Intermediate. Reluctantly, I agreed to this suggestion.

More than anything else, that experience has been on my mind since the shooting in Orlando – and I have recognised why: It was the last time I was forced to examine the attitudes towards homosexuality prevalent in the culture of my birth and upbringing. My conversation with the boy and his father had left me unsettled and I struggled to reconcile with the reality of what I was presented. I was affected also by my inability to do anything other than offer an expert opinion on what the father and son had probably already intuited.

At some point, I pushed the memory away, unable to reach any acceptance or rationalisation of the situation. Most Pakistanis — and Muslims in general — do not wish to harm LGBT individuals. Most are distressed by acts of discrimination and violence towards them. But so ingrained are the negative connotations of non-heterosexual inclinations and so normalised is our acceptance of prejudice that our first reaction to such acts in our midst is the one I had twelve years ago in Karachi; a brief disquiet followed by suppression of feelings so conflicted that one would rather not face them.

Each time we do this we feel a little less empathy. Ultimately, we reach a stage where we have conditioned ourselves to not care.

This is known as apathy.

When we are challenged we resort to deflection. Yes, the Ottomans were tolerant towards homosexuality and decriminalised it a century before the West started to do so.

Yes, many non-Muslim nations such as Russia, Uganda, Zimbabwe and Honduras are rife with LGBT persecution.

None of this, however, is helping LGBT youth growing up in Muslim communities around the world. It is not helping their inability to express their sexuality safely, it is not preventing the marriages they are forced into to “cure them” and it is not helping the mockery and harassment they endure if they dare to “come out”.

Let us be honest and very clear about this: LGBT individuals are widely frowned upon, discriminated against and, in the case of certain nations such as Iran and Saudi Arabia, executed. This is a state of affairs that is untenable and unacceptable.

What then, must we do?

I believe the answer lies in learning from successful LGBT movements in the West. While there have been variations in approach, the core of most such initiatives started with establishing the LGBT identity; an identity that comes with its own terminology and markers. Political activism is the currency of social change; it overlaps with and is aided or obstructed by other socio-cultural phenomena but is the primary vessel. To advocate an end to discrimination and discriminatory laws, the identity of LGBT individuals as an established group with its own unique identity is vital.

Since the terminology and identity markers already exist in the West, the next step would be to formulate linguistically and culturally integrative versions of these within Muslim communities. Following this, the process of political lobbying and social activism, in terms of fighting for the rights of a minority, can proceed. To be clear, the intent of identifying as a minority is not to formalise the schism between “normal” and “abnormal” sexual orientation, it is to make clear that LGBT individuals exist and that their presence and rights must be accepted.

While much of the opposition to the gay rights movement in the West came from religious institutions and religiously conservative politicians, the movement steered clear of making theological issues a central concern. This was a likely reason for the political successes; religio-political debates tend to culminate in stalemates and can stall political progress.

The Western gay rights movement focused initially on establishing a minority identity, disseminating accurate information on homosexuality, publishing gay and lesbian magazines and taking the debate into mainstream media forums. This was followed by litigation against harassment, employment discrimination and participation in politics.

So, perhaps, we know what needs to be done. And perhaps the real challenge lies within; challenging received ideas that we have accepted without scrutiny, without debate and without challenge. LGBT Muslims cannot fight this fight alone. They need our support, particularly in breaking the barriers to free speech, that perpetually stonewall the advance of sound moral reasoning throughout the Muslim world.