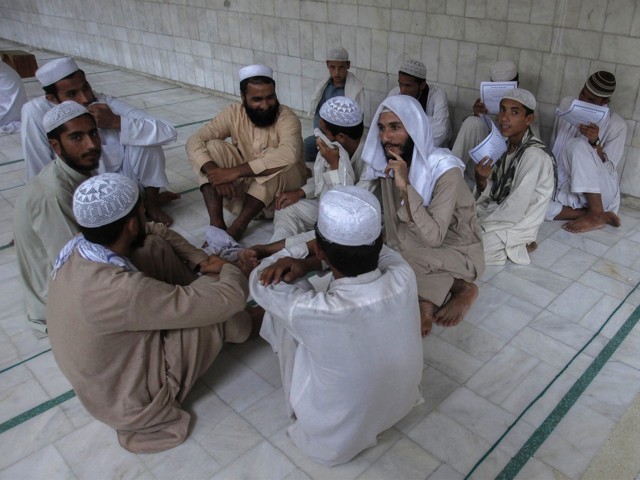 A heated debate has ensued over the allocation of PKR 300 million to Darul Uloom Haqqania by the Khyber-Pakhtunkhwa (K-P) government in the 2016-17 budget announced recently. The critics view this as a reward for a seminary that is notorious for its regressive world view and alleged support for violent extremism that earned it the title of ‘University of Jihad’ from Washington Post. Yet, there are plenty of reasons why conditional funding of madrassas, if pursued with caution, can be a prudent policy move by the provincial government to tackle religious extremism.

It is important to remember here that although madrassas have a long history in this part of the world, their proliferation and turn to violence in the recent past took place as a political project intended to achieve certain objectives during (and since) the Afghan ‘jihad’ of the 1980s. While state sponsored originally, the model was adopted by various sects and sub-sects that resulted in mushrooming of the madrassa networks along these lines. This created a political economy of its own that sustains thousands of livelihoods all over the country.

Most of these continue to have murky financial records with a number of local and foreign benefactors that enjoy considerable influence over the mode and content of learning. The government’s role in regulating these seminaries on the other hand drastically receded to a point where it is strongly resisted, as evident from the failure of attempted reforms during Musharraf regime. Rolling back, dismantling or reforming madrassa networks therefore has remained a challenge for successive governments.

The problems with the madrassas essentially are three fold. First, their misuse for short term political gains by state and/or non-state actors, both local and foreign, second, the particular brand(s) of religion being taught in these and third, their neglect of subjects in the realms of social and physical sciences as well as humanities.

Given the political muscle and structural reasons that keep madrassas in business, these problems cannot be tackled simply by using excessive force, as evident by the Lal Masjid misadventure, nor solely by creating counter narratives as evident by the failure of ‘enlightened moderation’. Rather, deeper understanding and incisive interventions in the political economy that sustains madrassa networks is required to shape their outlook.

It is in this context that a reality check is required. This must begin by accepting the presence of madrassas as a ground reality and owning up the role historically played by state itself in their expansion. Furthermore, it is important to acknowledge the failure of state to provide free universal education and leaving large number of children to rely on private education providers, both secular and religious. Lastly, one must be prepared to generate consent, along with using coercion to bring changes to the structure and modus operandi of madrassas.

While much has been written about the need for legislative and administrative measures to force madrassas to change, there has hardly been any suggestion to create an incentive structure that entices those whose livelihoods depend on madrassa networks to mend their ways. It is in this regard that demands such as registration, annual financial audit, curriculum reforms and restrictions on foreign funding must be complemented by offering conditional state funding to madrassas that agree to change course.

Surely, it is important to scrutinise the use of public funds and raise questions (as being done in Madrassa Haqqania’s case) about their potential misuse to further fuel extremist ideologies or to favour political allies. It is also important to demand a coherent policy in this regard instead of arbitrary selection of seminaries and allocation of funds. More transparency and details of precise policy objectives, as well as need for a robust mechanism for monitoring and evaluation to ensure that these are being achieved must also be highlighted. However, considering much greater amounts uncritically being spent on coercive policy tools to root out militancy and those spent in the past to establish these networks at the first place, there appears no harm in cautiously trying soft approach to achieve the desired outcomes in principle.

One must avoid stereotypes that depict madrassas as inherently evil. Research on extremism shows little evidence of causal link between type of schooling and susceptibility to violence. Rather, disproportionally large number of high profile terrorists have received secular/professional education and hailed from relatively privileged backgrounds. There is far more evidence that links conditions such as social and political alienation, frustration stemming from state’s failure to provide basic needs and its blatant disregard of fundamental human and economic rights, to emergence of violent movements that may adopt a certain ideology depending on local milieu.

Significant investment in social sector, particularly in human development is critical to create a peaceful society and thousands of students at madrassas cannot be excluded from this. It is also important to create more political space and ensure further devolution of power to provide youth legitimate avenues for political struggle and bargain. It is only through greater political empowerment, democratisation and investment in social sector that the country can hope to deal with the menace of violent extremism.

The author is a political analyst associated with the Department of Politics and International Relations at University of Oxford. He tweets as @adnanrafiq

Balochistan is far from “uncivilised” and these women prove just that!