Is India making the same mistake Pakistan made by allying with the US? 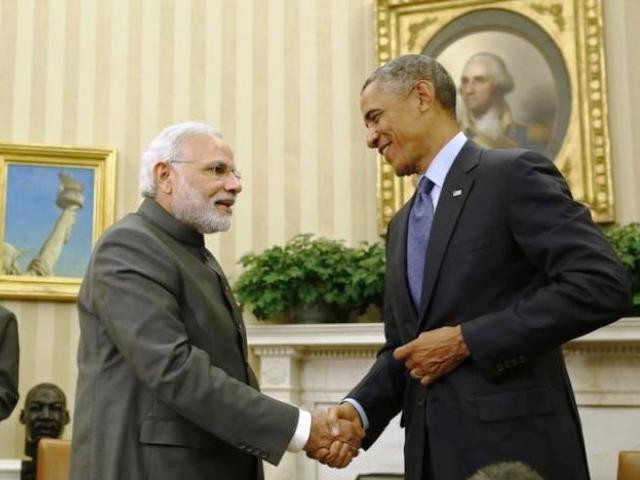 U.S. President Barack Obama shakes hands with Prime Minister Narendra Modi at the end of their meeting in the Oval Office of the White House in Washington September 30, 2014. PHOTO: REUTERS

The post-colonial history tells us that Uncle Sam has been more of a destabiliser than a divine presence in the region. Pakistan has been a close ally of the US since the 50s. But has the Islamic country been a real beneficiary by playing the western world’s game in South Asia? In its blind desire to get military parity with India and neutralise the existential threat from its eastern neighbour, Islamabad became a front for Washington in the NATO’s war against communist Soviet Russia.

As a result, Pakistan, a newly born country, lost its strategic autonomy quite early in its life and became a pawn in the larger game of the western countries.

Many of the evils afflicting the Islamic Republic today are by-products of its close embrace with the US.

India, under the first Prime Minister, Jawaharlal Nehru, decided to make a different tryst with its destiny. Victim of colonial power for more than 200 years, it decided to chart out a different foreign policy path and, instead of becoming a camp follower, it took steps towards becoming the leader of third world countries. Non-aligned Movement (NAM) was a by-product of this thinking. No doubt New Delhi has been a close ally of Soviet Russia ideologically and strategically. It, however, never rented out its strategic autonomy and independence in foreign policy.

But India, an emerging economy with overweening ambition, is ready to play Pakistan in the second decade of the 21st century. Unmindful of its colonial past and the history of the last six decades, New Delhi is willing to embrace the US in a close strategic hug, thereby auctioning its military independence and strategic autonomy. A leader of the NAM is in a great hurry to become a stooge of the US led alliance. Fearing the overwhelming presence of China in South Asia and the Asia-Pacific region, New Delhi, is willing to join the American camp to thwart the ambitions of Beijing.

The Logistics Support Agreement (LSA) or Logistics Exchange Memorandum of Agreement (LEMOA) that the South Asian democracy has agreed to sign in principle with Washington, would give the American military access to India’s bases. That would mean that New Delhi becomes a military lackey of the US, the way that Japan, Philippines and South Korea are. The South East Asian nations have different historical experiences and concerns, and they have reasons to join an Asia-Pacific alliance meant to contain China.

But India has its own place in history and nurtures a future which reflects its glory and achievement rather than being a flag bearer of another country’s ambition. It’s a fact universally acknowledged that America is in a desperate situation to play a leadership role in the world vis-à-vis China. Its depleted economic might limits its military ambition and outreach. Washington wants to rope in New Delhi to play its game and compensate its declining power.

The problem is that the governing party in India today is a Hindu right wing party, Bharatiya Janata Party (BJP), a group that has never participated in any anti-colonial movement and its ideological parent, Rashtriya Swayamsevak Sangh (RSS), always served as a stooge of the British during the freedom struggle. A party with such a dubious history is bereft of the larger vision that shaped the struggle for independent India.

Prime Minister Narendra Modi, a man with highly constricted intellectual horizons, believes that by bringing India into a close military embrace with the US – he is venting the aspirations of new India. He wants India to think that anti-China strategic alliance with the west and a membership of the Nuclear Suppliers Group (NSG) are the best things that could happen to the country. But Modi, a man with limited ideology, does not understand that the corporatisation of the foreign policy might serve India’s corporate and business interests, but harms the larger vision of the nation.

He does not understand that India’s interests and the interests of the west are at odds with each other. Terrorism in the region found its roots, not because of Pakistan but because of the western world. Today Afghanistan is suffering not just because of Islamabad; Washington played a great role in legitimising destabilisation in the Hindu Kush.

A military alliance with the US would mean the sanitisation of the American sins in South Asia and elsewhere. Can we escape the consequences of accepting an international evil? If India allows Washington to launch drones from its territory against the Taliban or the ISIS, can we remain unscathed from the resultant consequences? A military alliance with America means India will also be drawn into war against terror, and that would make India even more vulnerable to terror attacks.

Friendship with the US comes at the cost of South Asian solidarity. It will not allow India to normalise their relationship with Pakistan. Joining the American camp pushes Islamabad deeper into the rival camp. Any future friendship with China becomes all the more difficult. The LSA means institutionalisation of historical animosities in South Asia.

You can choose your friends, but you cannot choose your neighbours. India has no option but to deal with its two neighbours – China and Pakistan. Why should New Delhi buy into the western notion that China’s rise is a threat to India? China is in a different league and India is nowhere close to the communist regime. Although ideally, establishing peace and stability in the larger picture would require New Delhi and Beijing to engage with each other more. However, at the moment, India’s alliance with the US creates tension in the region – with both the big neighbours looking at each other with greater distrust than ever before.

If New Delhi thinks that military alliance with the western nation would bring stability or parity in South Asia, it suffers from myopia. Bilateralism between India and Pakistan suffers. Normalisation of relations between the two neighbours becomes all the more difficult. As a result, Afghanistan remains just as disturbed as it has always been. Overall, the new military alliance promises to cause more destabilisation in South Asia than has ever been witnessed before.

If we don’t learn from history, history condemns us.