Why is FATA still administered by a typical British Raj law? 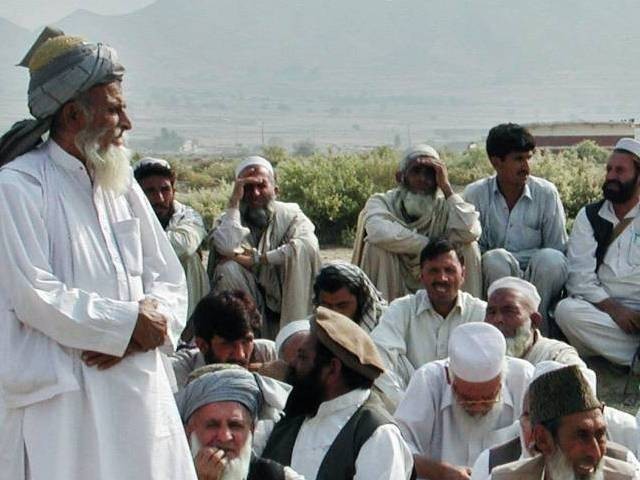 After the British took over Punjab from the Sikhs, they inherited what they called the frontier problem. The Pakhtun tribes on the periphery of Punjab had a long history of resisting authority emanating elsewhere dating back to the days of Akbar the Great. Maharaja Ranjit Singh had successfully driven back the Pakhtun tribes, but even that hard fought peace was tenuous at best, exacerbated by the fact that Ranjit Singh was a non-Muslim sovereign and the tribes were entirely Muslim.

As the power in Punjab changed hands from Sikhs to the British, the tribes once again rose in open revolt. To subdue the Pakhtun tribes, the British devised the Frontier Crimes Regulation (FCR) which took its final form in 1901. It was designed not as a law that a civil government administers on its citizens but was a kind of a martial law by a ruling power subjugating a hostile race. Most notably it concentrated the executive, legislative and judicial functions in an all-powerful executive i.e. deputy commissioner who was the judge, jury and executioner.

The FCR did not provide for due process of law, denying to the tribes the right to legal representation or appeal. The most offensive part of this law was the idea of collective punishment, where acts of an individuals could lead to collective punishment for the entire tribe. This was classic British bureaucracy; putting the natives in their place.

The tragedy is that Pakistan, a republic and therefore a constitutional entity based on a social compact between citizens and the state, still administers the FATA region under this law. This means that as many as seven million of Pakistan’s citizens are denied that their basic fundamental rights that are otherwise promised to them under the Constitution of Pakistan, 1973.

To a large extent, this discrimination is built into the constitution itself which confers a special status to tribal areas of Pakistan under Articles 246 and 247 of the Constitution. Under this scheme, any law passed by the federal parliament or the provincial assembly does not automatically apply to federally or provincially administered tribal area respectively unless the president or the governor of the province extend its application to these regions.

Article 247(7) specifically bars the jurisdiction of the Supreme Court and the High Court to the tribal regions. By excluding FATA areas from the jurisdiction of the superior judiciary, the Constitution closes the door on the citizens in FATA in so far as the enforcement of their fundamental rights are concerned.  In other words if you have the misfortune of being from FATA or PATA regions in Pakistan, you cannot bring a writ petition before the High Court to redress any grievances you might have against the state.

Express Tribune reported on June 23, 2016 that the government plans to bring Nizam-e-Adl Act 2016 to replace the FCR. It purports to undo some of the horrendous wrongs by giving the superior judiciary jurisdiction. While this is a welcome step, there is also some cause for concern. The jurisdiction being vested in the High Court is through the aforementioned act and not through a constitutional amendment changing the nature of Article 247(7).

This means that the only time a resident of FATA may approach the High Court is possibly through an appeal under the Nizam-e-Adl Act 2016, against an order of a qazi and his council of elders or jirga. Therefore, ostensibly, the Peshawar High Court or even the Supreme Court of Pakistan would not be able to act under Articles 199 and 184(3) respectively. The constitutional jurisdiction of the superior judiciary, which is sine qua non for the enforcement of fundamental rights, will continue to evade the residents of FATA. So long as this is not done, the mainstreaming of FATA is impossible.

Secondly the authority of the political agent has been further cemented through the law by making them into magistrates and vesting in them judicial functions. In other words Nizam-e-Adl Act, 2016 is old wine in a new bottle, packaged with Islamic nomenclature i.e. aazi etc, with only a limited right of appeal.

What needs to be done in FATA in particular and tribal areas in general can only be done through two methods. The president, on the advice of the federal government, can order the exclusion of all tribal areas from the operation of Articles 246 and 247 of the Constitution. Here the Constitutional imperative is that the president is required to seek the views of the people of each tribal area as represented by the tribal jirga.

Therefore, this course is foreclosed by the possibility of a tribal veto by unelected tribal elders. The other better and more civilised way of doing it is by amending the Constitution and abolishing the tribal areas once and for all, ending through the people’s representatives, including elected representatives of the FATA region, the discrimination and duality of the system forced upon the FATA region. FATA can then be made part of the Khyber Pakhtunkhwa (K-P) province as a whole and FCR can be repealed immediately, without the need for a special act to replace it.

Such a change would be momentous in our history. It is an idea that has been kept on the backburner for over seven decades. For seven decades we have shirked away from the responsibility that state owes to its citizens in FATA. There is no other alternative. We have to choose between treating our own citizens as a subjugated race or treating them as equal citizens and partners in the progress of the nation. I am sure the common man, but not the tribal elders, would welcome the state’s decision to finally extend to them the independence that we have harped on about so proudly for so long. Integrating FATA into Pakistan, and thereby abolishing FCR, a remnant of colonial misrule, will be a step towards completing Pakistan.