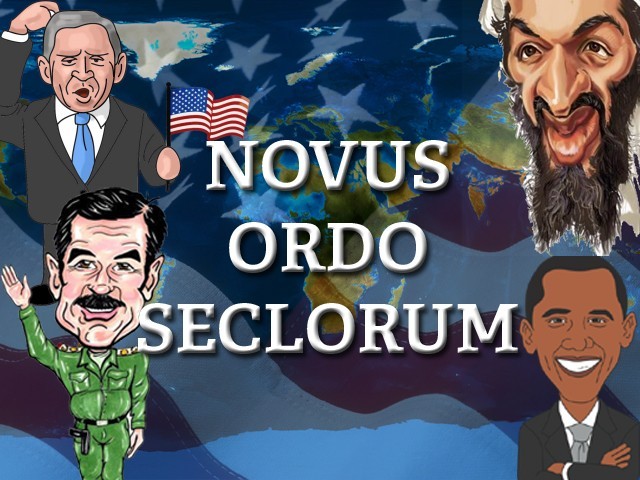 President Bush senior intervened in the Middle East with full force following Iraq’s invasion of Kuwait and formed permanent bases there. It was about this time that he read his infamous ‘New World Order’ Speech. That however is for the next part of Novus Ordo Seclorum – Bush, Clinton, Bush and the rise of the New World Order.

“The more things change, the more they stay the same. Boundaries shift, new players step in, but power always finds a place to rest its head. History is written by the victor and here I am thinking we’ve won. You bring down one enemy and they find someone even worse to replace him. Locations change, the rationale, the objective. Yesterday’s enemies are today’s recruits. Train them to fight alongside you, and pray they don’t eventually decide to ‘hate’ you for it, too.” – General Shepherd.

If you have ever been a fan of the First-Person shooter genre, you must have heard of two distinguishing titles; Doom and Call of Duty. While Doom was the pioneering game of the genre, it was Call of Duty that made the connection between games and modern warfare. The above quote is by General Shepherd, a central character in one of the most successful titles of the franchise, Modern Warfare 2.

As a General who kicks off a major world war after a botched CIA operation carried out at his directive, his character symbolises the thinking of the modern American administration, which now prefers silent black ops to open warfare. If black ops do not do the job, proxies are trained and infiltrated into the battlefield for example the ‘moderate’ terrorists in Syria.

However, this strategy was not the preferred mode till recently. A show of military power was always a warranted and crucial necessity for America in a world, which was at first contested by the Soviets as a rival superpower and later on contested by countries which resisted its dominance. To analyse the application of military power exercised by US presidents over the years, we must first look at the global political situation post-World War II. This blog will concentrate on the history of American military interventions and wars, while its follow-up blog will make predictions on how the US will use its military-industrial complex in the future.

The Second World War destroyed Hitler and his blitzkrieg war machine but left the world with two super powers hell-bent on world domination perhaps more so than Hitler himself – Communist USSR and Capitalist America. Both garnered allies around themselves and began what was known as the Cold War. The Cold War may have been termed ‘cold’ but in numerous places around the globe, it was definitely ‘hot’. The placing of Jupiter missiles in Turkey by the US targeted at the Soviets followed by a botched invasion of Cuba, led to the Cuban Missile Crisis and could have shown the world the horrors of open nuclear conflict.

This tug of war also led to some long indirect wars between the superpowers, which were fought through proxies such as the Vietnam War and the Soviet-Afghan War. The defeat of the US at the hands of the Soviet backed Communist Viet Cong or the National Liberation Front (to be politically correct) in the Vietnam War led to the public outrage and anger within the US. The American administration was facing immense pressure at the home front to bring its troops home and the mounting casualties of war was not helping their cause either. Their defeat at the hands of a smaller and ragged force left deep scars on the psyche of the American military.

A few years later when the Soviets committed the ultimate blunder of sending their own troops to quell an uprising against the Marxist People’s Democratic Party of Afghanistan (PDPA), the Americans got their shot at revenge. Using Pakistan as its spearhead and conduit, the American Central Intelligence Agency (CIA) aided the Mujahedeen both financially and militarily. With training, aid and arms being provided in abundance to the Mujahedeen, the CIA and its allies chiefly Pakistan, Saudi Arabia and other Gulf States defeated the Soviets.

It was in these years that the Americans made an ally and partner of ‘Tim Osman’ or Osama bin Laden as we know him.

As an asset of the CIA in the war against the Soviets, Osama gained popularity and credibility in the world of religious warriors, who came to see him as the symbol of resistance against infidel empires. There is no doubt that the CIA helped bolster this image however Osama solidified his position further when he helped build Afghanistan and Somalia post-Afghan war.

The Americans were fighting on two fronts – both through proxies – during the 80s. One was of course against the Soviets in Afghanistan through the Mujahedeen and the other was against post–revolution Iran through Iraq. They lost one and won one.

The Soviets were defeated in 88 and had to retreat to the USSR. Demoralised, bankrupt and facing down an unsuccessful coup, the Soviet Empire crumbled in 1991 following the signing of the Belavezha Accords. The mainland remained largely intact; however the clout that the mighty Soviet Empire once exercised was gone. The Americans celebrated the official end of the Cold War – if they only knew that the ‘unofficial’ Cold War or the ‘Colder War’ would bring them to their knees, they might have been more prudent.

Just a few hundred kilometres west, the Americans had to bear the defeat of its ally Saddam Hussein. Even when the Iran-Iraq War ended in a truce, the allied objective of eliminating the revolutionary government of Ayatollah Khomeini remained elusive. They had already faced bitter humiliation following the botched rescue attempt of American Embassy hostages in Operation Eagle Claw. The failure also cost President Jimmy Carter his presidency who lost the subsequent elections to a seemingly tougher Ronald Reagan.

President Reagan’s team quietly negotiated a backdoor release of the hostages and the announcement came within minutes of his inaugural speech. Who benefitted from this ‘October Surprise’ is plain to see. Whatever the ‘backdoor diplomacy’ policy yielded for the Americans then, they had acquired the tag of ‘Great Satan’, which they have not been able to get rid of till today.

Win or lose, it’s all the same.

The victory in Afghanistan and the apparent defeat against Iran had the same result as far as the Americans were concerned. It created two monsters for the American public, both of whom were once highly regarded allies.

The first were the Mujahedeen who morphed into the Taliban after numerous years of infighting. We saw Reagan receiving them in the White house. All of CIA’s ‘freedom fighters’ along with their leader Osama bin Laden who battled the Soviets with primarily American and Saudi money later became independent to form Al Qaeda. (It of course debatable if they ever left the American employ, however this is not the time and place to discuss this). Pakistan, which was the spearhead in this counter-offensive, was left to deal with the roughly 100,000 fully armed and trained Wahhabi extremists.

The second was Saddam Hussein, with whom both President Bush senior and President Bush junior had to deal with in separate wars. Remarkably the administrative staff that both ‘Bushes’ had were more or less the same. You can easily find media and documents on ‘mother of all coalitions’ Donald Rumsfeld meeting and greeting ‘our kind of guy’ Saddam Hussein all over the internet.

The Saddam regime, which America supported financially and militarily till the truce in August 88, became its public enemy number one just three years later in the first Gulf War.

President Bush senior intervened in the Middle East with full force following Iraq’s invasion of Kuwait and formed permanent bases there. It was about this time that he read his infamous ‘New World Order’ Speech. That however is for the next part of Novus Ordo Seclorum – Bush, Clinton, Bush and the rise of the New World Order.

Stay tuned for the second part of this series on the American presidents.