The Afghans are to Pakistan what the Muslims are to Trump 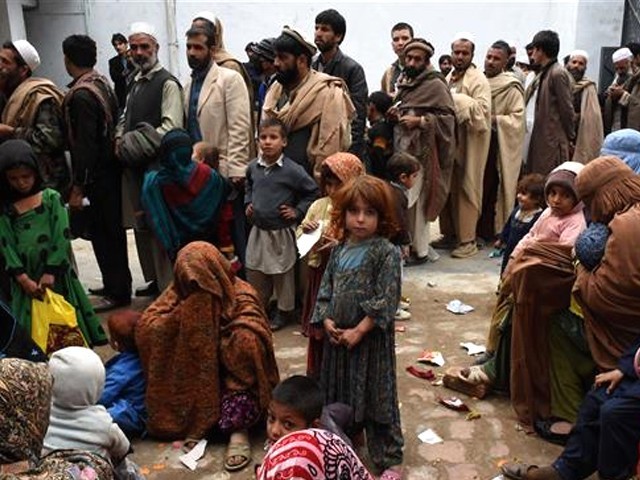 Afghan refugees gather for renewal of their family cards at the Chamkany registration center on the outskirts of Peshawar, Pakistan. PHOTO: AFP

They have been wreaking havoc in our country since the early 80s. The spread of drugs and the Kalashnikov culture is blamed on these poor souls and rightly so. Their help in the conduct of terror plots throughout the country is widely known; the Army Public School (APS) attack in December 2014 is a case in point.

With Zarb-e-Azb in its final stage, fighting internal and external threats in FATA and dealing with border skirmishes, it is safe to say Pakistan already has enough on its plate. Yet, it has been the only country gracious enough to grant three million Afghan refugees an unlimited stay. Rather than acknowledge the good will, they have taken advantage of our hospitality.

Yet, I ask you to let them stay and not force them out.

They have nowhere else to go.

In a recently conducted interview, Sartaj Aziz stated that Afghan refugees were posing a threat to Pakistan’s security and plans regarding their repatriation should be chalked out soon. It’s surprising this statement was made considering the Afghan government submitted an extension for their stay last month.

Could his statement have something to do with the on-going tensions between both countries?

Following the closure of the Torkham border – restricting travel on both ends – and recent deadly clashes, both countries have upped security forces at their borders and Pakistan decided to build a gate on their side of the border.

Will these decisions prove to be problematic or be the much needed solution both countries are desperately searching for?

What will happen though, is that these decisions will have an adverse impact on the Afghan refugees in Pakistan; a country they consider home where they live and work diligently. They have nowhere else to go. Our country is their home, where they live and work and play and pray. We cannot take that away from them. Think of Karim, an Afghan shopkeeper in Peshawar, who was born in the city in 1985, who has children who were born in the same city, and who works arduously to give his children a bright future, just like any of us would.

He visits his relatives in Kandahar occasionally, when it is safe to do so, but otherwise he has made Peshawar his permanent abode. Forcing him to “return” would be inherently wrong. How can a person “return” to a place if the place is not really home to begin with?

Donald Trump is chided for his racialism, for claiming that once he is in power, there will be a deportation force that will boot all illegal Mexicans out. Legally, this action would be correct. However, basic notions of humanity dictate that you do not forcefully repatriate millions of people, destroying their livelihoods, ruining their lives merely to assert your sense of nationalism – no matter the legality of their stay.

This is why he is vehemently criticised for his stance on illegal Mexicans. How would our government be any different if it partakes in a similar exercise with regards to the Afghans? Moreover, unlike the Mexicans, the Afghans have not been and are not in Pakistan just to earn a living: they have legitimate security concerns due to which they cannot go back to their homeland.

It is unfortunate that whenever there is a terrorist attack by people claiming to represent Islam anywhere in the West, all of the United States erupts in a furore against “those Mozlems.” Blaming a religion or an entire nationality for the actions of an individual or handful of wayward individuals is unfortunate. Yet, we have done the same in scapegoating Afghans for all the ills plaguing our society or when the Afghan military strikes inside our territory.

The recent flare up with Afghanistan means that we might even intern refugees in camps. The United States is still embarrassed by the wholesale internment of Japanese Americans during World War II. Do we, too, want to leave such a botched episode in the history of our country?

We expect to be accepted in European countries or the United States when we immigrate there. If by happenstance, we happen to be on a refugee or asylum status, it is considered our right to be there. Yet, we deny the same sense of security and belonging to legal refugees in our country, who have now established themselves and have been living in Pakistan for decades.

Let the Afghans stay – allow them to mesh into our social and political fabric the same way Britain has done to millions of Pakistanis and give them our nationality. The Afghans, for their part, should show their gratitude in return for our charity and should lessen the resentment they harbour against us Pakistanis. If they want to stay and settle over here, they must strive to become Pakistanis.