Dear PEMRA, why can’t Hamza Ali Abbasi talk about the plight of Ahmadis without being threatened or banned? 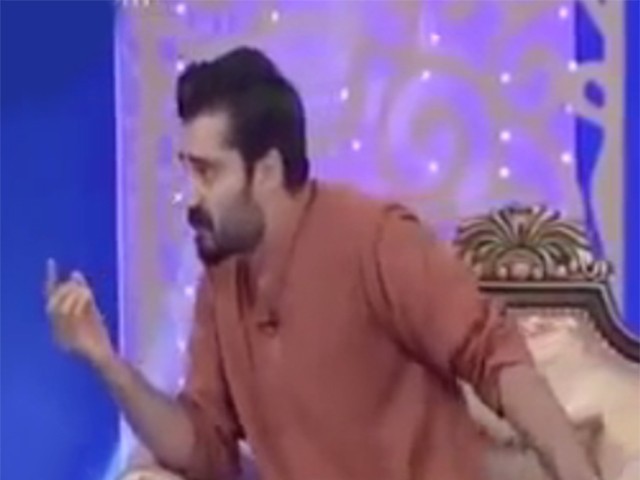 To Abbasi’s credit, by initiating a conversation, he was only trying to raise awareness in the most peaceful and logical way possible. PHOTO: SCREENSHOT

Pakistan is the land of topsy-turvy, where the righteous are punished and the wrongdoers thrive. In what is a thoroughly perplexing decision, The Pakistan Electronic Media Regulatory Authority (PEMRA) imposed a ban on Hamza Ali Abbasi’s Ramazan program.

What was his crime?

To open a dialog on his show on the plight of one of the most viciously persecuted minorities in Pakistan, the Ahmadis.

Not a few days ago, Hamza Ali Abbasi asked why Ahmadis were treated so poorly in the country and why we were so afraid to talk about it:

“The community is being suppressed but if you talk about it, people say ‘You’re from that community that’s why you’re saying this. “I am not an Ahmadi, I am a Sunni Muslim.”

To Abbasi’s credit, by initiating a conversation, he was only trying to raise awareness in the most peaceful and logical way possible. He was not threating war. He was not preaching violence. He was just trying to talk.

Shockingly, this resulted in a horrific reaction from a right-wing mullah, who came on television and openly threatened Abbasi’s life. In hindsight, this shouldn’t be so shocking. Can we expect any more from the unregulated religious leaders who lack the mental strength to engage in non-violent discourse? Who make up for their lack of intellect by reacting with threats? Yes, the more threatened they feel, the more disempowered they feel, because they lack the intelligence to engage with those that disagree with them with words.

But if anything, it is PEMRA’s command that is more disappointing. Instead of censuring this mullah for openly preaching bodily harm on another person, they have gone after a man for expressing his opinion.

According to Dawn, in a statement issued by the regulatory body, PEMRA said:

“It had received 1,133 complaints through Whatsapp, Twitter and telephone calls regarding the transmissions.”

OK, but so what? Does PEMRA exist to make the right decisions, or does the body exist to make any decision if it is under pressure? Has PEMRA just revealed that the righteousness of its decisions depends on how strong the mob mentality is? Should PEMRA base judgments on what is right, or should it needlessly give importance to a group of self-righteous ignoramuses? How does this country move forward when every other person in authority lacks the testicular fortitude to stand up for what is correct?

Let’s just do a quick recap of the state of affairs in Pakistan:

1. The man who threatened Abbasi hasn’t been banned by PEMRA, but Abbasi has.

2. Although the police have taken action against Hafiz Hamdullah for his behavior against Marvi Sirmed, there has been no news of him being banned from television.

3. Maulana Sherani, the leader of Pakistan’s most powerful Islamic Council, who ruled in favour of child marriages and men beating their wives, actually is not qualified for his job and replaced Dr Khalid Masud, who was a PhD from Mcgill University.

4. Recently, PEMRA banned condom ads from appearing on television before eleven at night, clearly under the belief that no one has sex in Pakistan, and we are just overpopulating as if by magic.

5. PEMRA issued a notice to a drama about child abuse in Pakistan called Udaari, as the body believes that as far as important social issues are concerned, the head must be buried as deep in the sand as possible.

In Pakistan, Ahmadis are tortured and murdered every year for their faith. This is only because they were born differently, and through no fault of their own. At the very least we should be able to talk about it openly.

Apparently, we should just pretend it doesn’t happen.