Being a Syed-zaadi wasn’t a matter of pride for me, it was a curse! 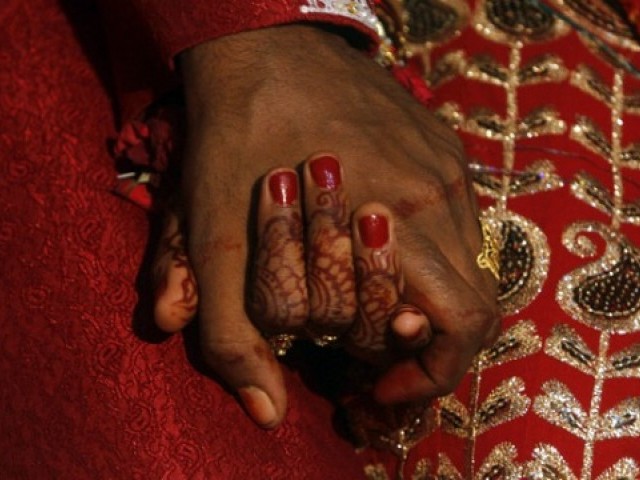 Hamza convinced his family and within a few weeks his mother and aunt came to my home to ask for my hand. PHOTO: REUTERS

I was born into a Syed family. Since childhood, I’ve been told that this is a blessing as we are the direct descendants of Prophet Muhammad (PBUH). Therefore, all Syed girls had a status equivalent to that of mothers of Ummah. Thus, it was forbidden for us to even consider marrying a non-Syed man. Everyone called the girls of our family bibi jee and, while growing up, this was a matter of pride for me.

I was in my early teens when I first realised that there were a number of unmarried women in our family, belonging to all age groups. Due to family restrictions, finding a match for Syed girls was extremely difficult. For this reason, many of my cousins’ husbands were a complete mismatch. To make matters worse, most of my male cousins preferred marrying outside their caste as the men have no such restrictions.

We were three sisters and one brother. My brother (who was two years younger) was the most important person in the house. His birth sparked frantic celebrations in contrast to rather muted welcomes accorded to my sisters. From that point onwards, he received preferential treatment when it came to food, clothes and was later admitted to the top boarding school in our area.

Time passed and I turned 18. I was fair, tall and slim – ticking all the right attributes conventionally expected of an attractive girl. As I was coming of age, some of my female cousins were getting older; a few in their 30s and others in their 40s. Some still hopeful, others left with no dreams – trying to kill time within the walls of their homes.

In a male dominated society, such as Pakistan, finding a suitable match for a girl over the age of 30 is challenging. And for us Syed-zaadis, it’s almost impossible.

Some of my male cousins in their 40’s were able to find girls half their age. Most of their brides were non-Syed, and in my heart I used to wonder, if the Syed girls were given the status of mothers of Ummah, does it not make all Syed boys the fathers of Ummah?

The decade I was growing up in was the mobile and internet era. The world around me was changing at a much faster pace, but life in my house was still anchored in the 18th century. In my family, not many girls were allowed to go to school or college. But my mother (who was also non-Syed) insisted my father let me go to college.

The only reason my father permitted my attending college was so I could find an educated husband. Most of my class fellows were non-Syed and had never faced the same restrictions that I had. There were times when the pressure of being a ‘bibi jee’ was too much for me to handle.

And then I met Hamza; a boy who used to wait for me outside my college every day.

I didn’t want to speak to any man. I resisted talking to him for a long time, but he was persistent and I liked the attention of this young, handsome man. So, eventually I gave in and we started talking and exchanging notes. One day he handed me a mobile. I accepted his gift, not realising that it would change my life forever.

We started talking to each other. He was different from all the men around me. He was supportive and encouraged me to study hard and follow my dreams. I wanted to dream but I was scared. Hamza was the only ray of hope in my life.

One day, my aunt (my father’s unmarried sister who lived with us) saw me texting on my mobile. She immediately handed it to my father who read all of my text messages. My family threw a tantrum and everyone blamed my mother for allowing us freedom. My college life was also held accountable. Soon after, they decided to pull all my sisters out of school. But the worst was not over yet.

I requested a friend of mine to contact Hamza and tell him about the whole situation. Hamza convinced his family and within a few weeks his mother and aunt came to my home to ask for my hand in marriage. My family took that as an insult; after all, how dare a commoner ask for the hand of a Syed-zaadi? My grandmother insulted Hamza’s mother by telling her that she would rather marry me to a dog than her son.

I realised that being a Syed-zaadi wasn’t a matter of pride for me anymore; it was my biggest curse.

Everything around me was falling apart and the only option I had was to kill myself. I thought of running away from home but I was too scared. I would bring a bad name to my family. I thought about how it would impact my sister’s futures.

Weeks turned into months. My only contact with the outside world was my friend, who used to visit every weekend and bring messages from Hamza.

My father arranged my marriage with a cousin of mine who was 42-years-old. My brother moved back home and started medical college. Every man around me was selfish. They only cared about themselves. If the men in our family ever cared, they would have never married any non-Syed girl.

I prayed to my Creator every day,

I was being forced to marry a man twice my age; all my hopes were dying. Ten days before my wedding, I received a message from Hamza asking me to run away with him. This was my only chance of getting out of this cage, so I decided to be as selfish like the men of my family and leave home.

It was my last day. I was depressed about having to leave my family, and scared as well. I waited for everyone to go to bed. At midnight I quietly walked towards the back door of the house. But, before I could open it, I heard my father’s loud voice asking me to stop. He was shouting from his window and his voice woke up my entire family who came running towards me. My brother stood with my father, a pistol in his hand. My grandmother started cursing me and crying.

Before I could say anything, I saw my brother pointing the gun at me; a loud bang, followed by extreme pain in my chest. My mother came forward to hold me, but it was too late. I was already taking my last breath.

The next morning the village people were told that my father accidently fired the gun while he was cleaning it. My whole family chose to remain quiet. No one reported the incident to the police; no one said anything to my brother. They all thought that he saved their pride.

My family and other so-called respectable families have got a lot of blood on their hands. Death is not always physical; there are countless women who die every day by the misery inflicted upon them by the so-called respectable men in their families. For 100s of years, in a feudalistic society like ours, men have used religion as a tool to protect their lands and keep it within the family. When Prophet Muhammad (PBUH) can give his daughter’s hand in marriage to Usman (RA), who was not from his own family, then why can’t we grant that same right to our women?

Disclaimer: The post is a piece of fiction inspired by a true story

The author is an entrepreneur who hails from Mansehra, Khyber-Pakhtunkhwa. She is currently enrolled in a course on Social Entrepreneurship at University of Oxford.