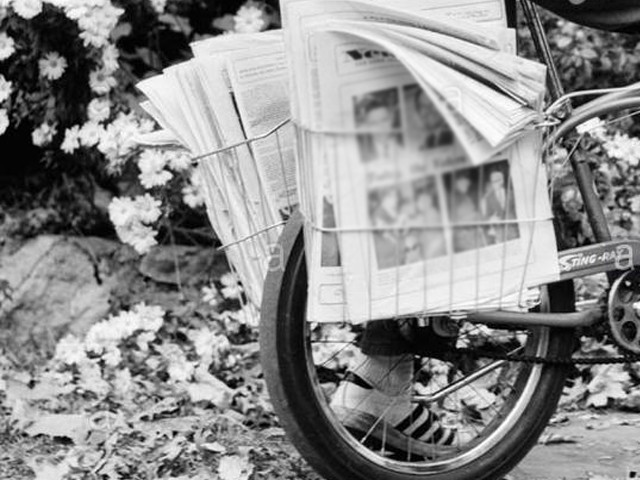 he pedalled harder to keep the cycle moving. His heart, confused, began to beat in an odd manner. He looked again at the remaining newspapers and before ‘death’ there were numbers, double digit numbers.

He threw it inside the house and as he cycled forward and heard it land softly on the doormat. Great shot, he thought. There were three streets to go. And the light around him was slowly spreading. He continued. In the street before the last, he slowed down because he was nearing the house filled with flowerpots. Previous shots had broken some pots and invited anger from the owner whose life seemed to be divided into the dozens of pots she had.

This time, though, he came near the gate and slowly hooped it inside. The sound of contact with the floor was pleasing as he cycled away. Soon, with the day’s task being completed, he returned home. He changed his clothes and wore the school uniform which his mother had pressed for him. As he packed his bag, he saw his English notebook lying on the floor. His teacher had given him homework; make sentences with four words from the passage – and he had made none. He put the copy inside his bag and left.

School was a strange place, he thought daily, because he always waited until it was over. After school, he walked to the next street, riddled carts brimming with vegetables, corn, samosas, jalebis and sugarcane. In that aroma, he cleared the dust from a patch of empty space, and waited for him. He arrived shortly, sweating as usual, from his day’s work. With an exchange of smiles, he gave him what he had and sat now on the side of his fruit cart. The fruit seller took the newspaper, and began to read the news for him, translating after every line – his daily dose. He listened intently, as a policy maker, politician, military general and a common man, all at the same time. He had found his personal news reporter, his teacher, just last month.

He had started his part-time job distributing English newspapers at the beginning of grade five. Halfway through the first month, he had carried a copy in his bag to school. In his English class, he held on to the newspaper, finding it somehow more relevant than the stories and essays he had to memorise from his text book. His teacher politely refused, however, when he approached her after school and requested her to read the news. Though she could read, she had another job right after school. He was upset, not at her, but at himself, for not knowing the vocabulary. He looked again at the newspaper, full of text, big and small, and coloured pictures. His teachers and friends often spoke about how important English was because of jobs and further studies.

But for him, it was something else. He often fantasised other things. When he would know another language, would the words softly step into his dreams? Would his thoughts be confused having so many words to choose from? Would the words come with their own pictures and memories of people who made them? And he was equally fascinated with the new letters. Who had come up with them? Who had decided why ‘f’ would have a soft bend towards its head and a spear through the chest? What was the dot in ‘i’ doing all by itself? And who had decided the common straight line and the half circle for b, d, and p? His favourite letter was x, not because of its shape but because it formed such few words. But yet it was part of the alphabet. It was essential yet always ignored. And there was something there he liked.

With these thoughts, and a newspaper tucked in his right pocket, he went to the next street for jalebis. After the purchase, he sat down near the cart and began to eat thoughtfully. But the jalebi started to drip from the packet, and he took out the newspaper from his pocket and used it as a cover. It was this sight that the fruit seller had seen. Not every child carried a newspaper in his school pants, and so he had started a conversation, and was surprised to hear the boy’s request for him to be his newscaster.

He had agreed on the condition that he would go away with two English words every day. And so the news sessions started, always ending with a brief lesson, and each word he taught, the boy repeated after him, then wrote down the word, along with its meaning in Urdu, and a sentence, which was dictated by the fruit seller. His daily homework was to find these words in the newspaper (which he was always excited about) and to make sentences, for which the boy used the English words in an Urdu sentence. It was towards the end of the first week that he was introduced to two words that disturbed things: life and death. He repeated the nine letters after his teacher 12 times and after a hundred and eight letters in the air, he gathered them and wrote them down at the back of his English notebook, along with their meanings and a sentence.

The next day when he was about to throw the newspaper, his throw stopped in mid-air as he recognised one of the words in the headlines across all papers. He was so pleased he had spotted ‘death’ in big, bold letters. But as he cycled away, the meaning of the word came to him, and for the first time, the newspapers on his cycle felt heavy. And he suddenly realised that all the words he carried had weight. And he pedalled harder to keep the cycle moving. His heart, confused, began to beat in an odd manner. He looked again at the remaining newspapers and before ‘death’ there were numbers, double digit numbers. He stopped the cycle and tried to read who had died and where the deaths had occurred but the other English words gave nothing away about themselves. The number common across newspapers was ‘18.’ And he looked at it. The number suddenly seemed very, very cold to him. And aloof. It hid so many lives inside of itself, he thought. Households which had been broken, neatly into half. Dreams which had been buried. Futures that had been altered. And without knowing any of those people, he felt a soft weight as if all those had previously existed, now, had their 90 toes resting on his heart.

For the next few days, his throws never landed on the doormat and instead landed on the car, air conditioning units and sometimes on the terrace or roof. His arm still had the same strength but he was no longer sure if he wanted to share the news. What if he didn’t throw the newspaper on that particular day? Would it be better that people did not know about the deaths? But he threw it anyway, he was merely a messenger and so in one throw, he threw death, life, killings, birth, damage, destruction, and rebuilding onto doormats and once again his throws began to land softly, despite the baggage.

The next few days, he was reluctant in repeating the new words after his teacher, and when the words appeared in the air, he plucked them indifferently and inattentively, and committed many spelling errors.

“These words are not helping me.”

“The more words I know, the more I worry.”

The fruit seller briefly paused, and then continued.

“If you worry for those around you, that’s being human, no?”

“But what can I do for all that happens daily?”

“That’s a good question, and I don’t know the answer.”

And the boy smiled at the response. He had rarely heard these two phrases together. People often acknowledged the worth in his questions and then hurried to answer them as if the sight of an unanswered question was dangerous. Others (who because of little knowledge, time or energy) acknowledged their ignorance and then continued with what they were doing previously. But this was a first, to be acknowledged for a question, and for the question to stand unanswered alongside his teacher, with neither of them moving away.

He looked again at him, and asked him to repeat the words and their meanings, and his teacher responded.

He said them aloud, multiple times, wrote down their spellings, and their meanings.

“The sentence for these two words is..”

“Can I make a sentence this time?”

“Do you want to hear my sentence first?”

“Of course, the sentence can be in Urdu but you need to use the words in English.”

And as his teacher waited, he wrote,

The fruit seller patted his head and with eyes that smiled softly, moved on with his cart.