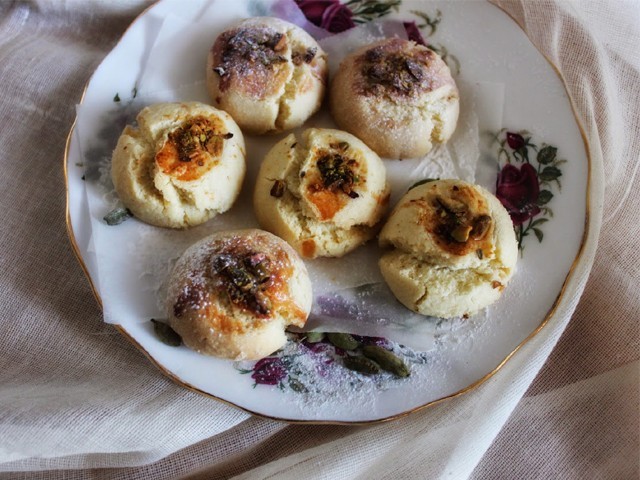 Naan khatai are of delicate constitution. Their surfaces crack fairly deeply when baking and they need to be handled with care when they are first out of the oven. PHOTO: MEHRUNNISA YUSUF

I always remember our house being well stocked with biscuits. There were the regular and perfectly shaped ones from cardboard boxes that included Peek Freans Peanut Pik with slightly soft peanuts; cumin laced Click and the plain Marie. Lu brand biscuits were crisper and more interesting. The scalloped shape of Prince Chocolate Sandwiches was akin to laser cut paper doilies. A snack pack of these often graced my school lunchbox. Candi, a brown sugar biscuit had little bits of caramelised sugar. Gala usually made an appearance when we had guests as they had a dainty design and a richer brioche like flavour. Salt flecked Tuc was the lone savoury classic. Sometimes, there would be a blue tin of Royal Dansk’s Danish Butter Cookies with an aroma of a freshly baked pound cake.

There would also be a glass jar of slightly irregular ones from the local bakery. In Pindi, we bought our biscuits from Wings bakery where (depending on how much you bought) they would be packed in brown paper bags or a cake box. In Islamabad, the bakery of choice was United and eventually Rahat Bakery. I discovered that it did not matter which bakery one shopped at as the biscuits were remarkably similar.

It appears that there were two kinds of biscuit dough; vanilla flavoured with imitation essence and a pale chocolate with a weak cocoa flavour. The dough was used to craft rectangular biscuits with a stripe of vanilla and chocolate, piped frilly rounds with a dip in the centre for a dot of fluorescent red jam, a square one with a crackle top and a round one with flecks of cumin. Chubby, round naan khatai with a bronzed egg wash were the exception as some bakeries would decorate them with nuts and others would leave them plain. I loved their melting texture much like the feel of walking on a soft and fine sandy beach.

Baba was partial to shortbread, particularly plaid printed boxes of Walkers. When I was at university, I ritually bought them for him at the duty free at Heathrow before boarding the plane home. Before this, mama would make shortbread at home, pricking the surface with a fork and scoring it in triangles before baking. O, my husband, has remixed and renewed this tradition with a tin of Fortnum & Mason’s collection when he visits my parents.

Looking back, I am struck by the absence of biscuit baking from the Yusuf family’s repertoire. I recall a few Christmases when we made sugar biscuits that were stamped with a crinkle cutter. But aside from that, it was cakes, bread and tarts that took our fancy. I am now married to a prolific biscuit eater. O has his favourites – chocolate digestives, hobnobs, Choco Leibniz and nut studded ones from Yasar Halim’s Turkish bakery in North London. Sometimes, I contribute homemade ones. The craving for naan khatai comes from a brief spell of monsoon-like weather. Hurricane Bertha swept through London in August of 2014. Her temper was expressed in loud claps of thunder and streaks of lightening, heavy downpours interrupted by bright spells and rainbows. Such weather reminds me of tea-time in Pakistan complete with deep fried snacks like pakoras, chicken patties and sweet naan khatai. On one such weekend O asked for pakoras. We ate them standing at the stove after blotting them on newspaper. The oil stains were reminiscent of grease marked paper bags of naan khatai and their soft, sublime texture.

I tried my hand at a few recipes I found online and was disappointed. Until I realised I should ask N auntie for one. N auntie is famous for her afternoon tea and is particularly well known for Pakistani classics. When I was younger and still in Islamabad, she hosted an annual tea that extended into the evening. She would put on an elaborate spread of sandwiches, kebabs, chaat and sweetmeats along with her signature flower arrangements. She was the right person to ask about naan khatai, especially since we both love the classic version with a light dusting of crushed pistachio. So thanks are due to her and her sister. I made minimal changes to the recipe and have provided baking notes, which I think essential.

Naan khatai are of delicate constitution. Their surfaces crack fairly deeply when baking and they need to be handled with care when they are first out of the oven. I transfer them gently to a cooling rack by lifting the baking paper and moving them over, instead of lifting them individually. Once cool, they hold their own. They are best had with steaming hot cups of cardamom laced tea.

Baking notes: I have tried a number of recipes before settling on this one. They are unfortunately slightly temperamental and therefore sometimes lack the precision that one associates with baking. For instance different brands of ghee or clarified butter react differently. I have used butter and found that it yields a flatter biscuit. If you live in the United Kingdom, I highly recommend using Lurpak clarified butter. If not, use good quality ghee. Naan khatai should be the colour of uncooked flour with only the egg wash catching colour. Their charm lies in their snowy hue so watch them carefully. I rotate the baking tray at the halfway mark. I have provided guidance on the dough below. If you experience difficulties, I would suggest refrigerating the dough for half an hour as this helps make it easier to handle. A handful of crushed pistachios or almond halves

Prepare your baking trays by lining them with baking parchment. Set these aside. Pre-heat the oven to 180° Cs.

Start by measuring the ghee. Sift together the flour, sugar, baking powder, salt and ground cardamom. Combine the dry ingredients with the ghee in thirds, mixing vigorously after each addition. You can do this with hand or in a cake mixer. The mixture will look like a fluffy, firm cake batter that can be handled briefly. In other words, it will be soft but not very sticky.

I use my measuring scale to weigh 25 grams of dough per naan khatai. This ensures a consistent bake. But you can always use a tablespoon to roll out a walnut sized amount.

Place the dough onto the lined baking sheet with an inch of space between each. Gently press the tops with the palm of your hand to flatten the surface. Beat the egg and brush the surface with the egg wash. Sprinkle on the crushed pistachio or press a halved almond onto the surface (skin facing upwards).

Tuck into the oven and bake for 15 to 20 minutes rotating the baking sheet at the halfway mark. The naan khatai should remain the colour of raw flour with only the egg wash gathering colour. They are done when firm to touch. Do not worry if the surfaces crack. This is part of the charm. Remove from the oven and transfer carefully to a wire rack by lifting the baking paper and moving it over. Do not attempt to move them individually as they are fragile and will break before they cool fully.

Once cool, enjoy them with a hot cup of tea.